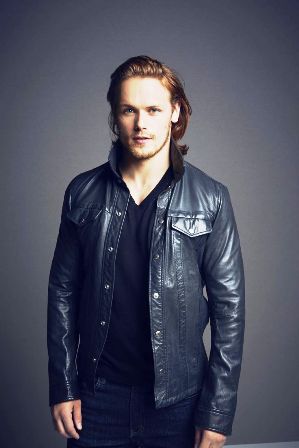 After graduating from the Royal Scottish Academy of Music and Drama in Glasgow,  Heughan landed a series of small, but steady roles in theatre and on television. His first big break came with the BBC soap opera Doctors in 2009. Parts in the Hallmark Channel film A Princess for Christmas, and the BBC drama First Light, were to follow, along with a stint as the caped crusader in the touring stage show Batman Live.

Upon his successful audition for Outlander in 2013, series author Diana Gabaldon said of Heughan, “Oh. My. God. That man is a Scot to the bone, and Jamie Fraser to the heart.”

Given the huge popularity of the show’s first season – ratings soared exponentially with each new episode – millions of Outlander fans obviously agree with Gabaldon’s assessment.

And yet, almost despite his new-found sex symbol status, as well as an array of awards in accolades over the last two years, the 36-year-old actor is affable, humble, observant, and philosophical in his approach to his profession.

Here, in this exclusive interview with Celtic Life International, Heughan opens up about his alter-ego Jamie Fraser, and Season Two of Outlander .

CL: At the end of season one, the scene in the prison was brutal and hard to watch, and it affected Jamie a lot. Can you talk a little bit about how that changes Jamie in season two?
SH: Yes, he is affected by it, physically and mentally, and we have certainly played that out in season two. However, we are not dwelling on it, and it’s not the primary focus of the season. They have gone to Paris to stop history, to change history, so it is definitely played out in the episodes, and it affects Jamie’s psychology, and it also affects his relationship with Claire and their marriage, but it is something that they need to get over. I think time is a great healer and, ultimately, he puts his whole body and soul into this mission, and then there is a great revelation that kind of cures him or brings him out of himself, and it certainly brings back the old Jamie. Without giving away too much, he does find some sort of resolution. But it is interesting what that stems out of, and if you read the books you may know what happens. Jamie’s definitely still affected by the trauma, and he is quite fragile at the start of season two, but he gets on with it, as he always does. I think under the surface there are still some issues to be dealt with. It has been a really interesting journey to play. I think myself and Caitriona both love any scenes that are kind of quite dramatic that we can really get our teeth into, that we can really stretch ourselves, our acting ability. I thoroughly enjoyed those episodes and look forward to more challenges.

CL: What was the feedback to the prison scene like?
SH: I saw some stuff on various websites and on Facebook and Twitter. You know, I think that if anyone who has suffered any kind of trauma can get something out of it, or feel that they can speak up, or find help in addressing their problems, then we have done a great thing. The story wasn’t just about Jamie Fraser and the event that happened to him. For me, it was definitely very interesting about the psychology of where he is at, and how that has affected his relationship with Claire, especially now they are going to be parents. There are all these like elements being played out. It is almost kind of sad in a way. We saw the innocence of season one, so much has been lost, but it is there to be found again.

CL: Are you excited to kind of take the character into new emotional levels this season?
SH: Yes, it is funny because Jamie wears all these scars on his body which are like marks of things that have happened to him. It is just very interesting, you know, just even in the physicality of things thinking we now have to carry this through forever, for how long we film this, so that has been interesting, but also, the psychology of things. I think we are all excited to see where this goes – the psychology and the more emotional stuff, and then when we get to the end of the season where we lose some characters, and it really does become even more emotional. 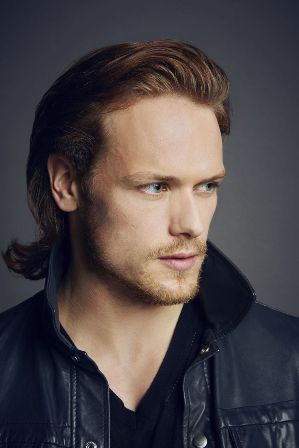 CL: Has there been a scene in season two that was particularly tough to shoot?
SH: Just starting any season is pretty tough, to be honest, because you have to find where the characters are at. And we had a break, as well, so we won’t go straight into it, and it is tricky where to place exactly where these characters are in their relationships. Then, logistically, we filmed a lot of our interior scenes in these amazing studios that they built – these incredible Paris apartments. That wasn’t too bad. Not like last year where we were out in the elements and the horses and things. But the politics has been pretty tough, as there are so many factions and so many players involved; the Duke of Sandringham, Bonnie Prince Charlie, lots of different politicians, and King Louie as well. It is a different kind of battle that they are fighting, and it has been really interesting to see how Jamie and Claire adapt to that and how their characters change in relation.

CL: Are there are certain new characters or new actors coming into the cast that you were most excited to work with?
SH: All the French cast were terrific, but we’ve also got some other characters that I’m excited about. Lord Lovat, in particular, is a great character. To read the scenes in the book, there are some great head-to-heads between him and Jamie and Claire as well, and I think, God, I would love to see some famous Scottish actors in those roles. And also, the events – Culloden and Prestonpans – they are big, big battles, and hopefully, we gave them the scale that they deserve. I know that people are going to be surprised by the first half of the season which is so luxurious, and beautiful, and pretty, and the second half is going to be muddy and bloody.

CL: You mentioned the battles and politics, but we also see a business side of Jamie now that he’s working. What is that side of Jamie like? How does he explore that?
SH: Yes, I mean, it seems very fortuitous that Jared leaves them all this property and money, and then he disappears, and Claire goes and buys herself lots of nice dresses, but yeah, I think Jamie is a natural businessman. He is charming, and he has a good head for figures and numbers, so therefore, that side of it, the wine merchant side of it, he does pretty well, and maybe we shouldn’t be surprised by that.

CL: Are there are any favorite scenes that you are looking forward to seeing on screen?
SH: I think the chapters on Prestonpans are so well described by Diana – you know what happens in nighttime and these little ambushes and the fires. I think it’s just such a historical thing, as well, for Scotland, and it’s not been done for a long time on film, so we are very lucky to be reproducing that on film. Yeah, the Court of King Louis XV is going to be very glamorous. We went to set the first day, and I saw the set and I was, like, wow, this is Versailles, it’s beautiful, and they’re like, no, that’s just your apartment. I was, like, this is my apartment? This is like a palace. I can’t wait to see the Court of King Louis XV.

CL: How’s your French?
SH: It’s okay. I don’t speak French, not like Caitriona. I failed my French exam in school, but it’s surprisingly a lot easier than Gaelic. I can understand French, generally, and I can almost read it. I can’t really speak it as much, but it’s great. We’ve got a fantastic tutor, and he’s worked very closely with us. We’ve got some really nice character traits in there that we’ve managed to put into the language, and it brings out another side to the characters as well. 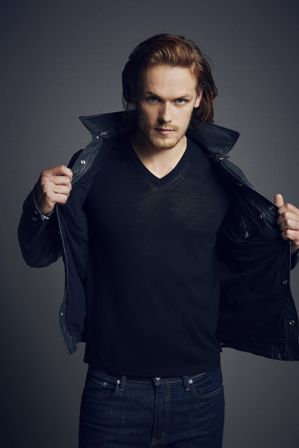 CL: Tell us about the new French actors.
SH: We have some fantastic new characters. The French actors poured in just a new dynamic, a new world, and there’s new enemies, new allies. We have Dominique Pinon. We’ve got Stanley Weber. We have this young boy that Romann Berrux plays, Fergus. He brings this great dimension to Claire and Jamie. He sort of becomes their surrogate son, and it’s really nice to see Jaime and Claire play father and mother and sort of play this family. And it brings another entity and dynamic to the whole relationship.

CL: Because you’ve moved from the Highlands to France, did the style of fighting change at all?
SH: Wow. I would say that the danger in Paris and Versailles is less physical with the swords and weaponry. It is more about politics and backstabbing and poison – more hidden. There is a lot more politics at work and a lot more danger, so it’s a different kind of world. But we certainly do go back to Scotland where we go back to the mud and blood and gore. So there’s something for everyone.

CL: The idea of shifting to different eras is pretty exciting. If you could visit any era, what would it be?
SH: I’ve always been obsessed with the King Arthur legends, and I don’t really know what period that would be. I’d love to discover the source of King Arthur, I guess.

CL: And what would you be? Would you be King Arthur?
SH: Absolutely. But then maybe Mordred’s a more interesting character.

CL: This show has launched you into the public eye in a different way.  How do you navigate that success, and what’s sort of the double-edged sword of being known?
SH: We do have that ability to support charities and have done so, and I think that’s definitely the positive side to this industry.

CL: Could you talk about what you like about Jamie, what you admire about him?
SH: I’ve been very surprised by Season two. Season one was about discovery and about a young man growing up and finding his place in the world and in a relationship. And Season two has been about discovering a side of the character that I didn’t know was there, that he’s playing someone else. He’s being quite deceptive. He’s learning to be deceitful, and he does it very well. Jamie is very capable and good at most things. But there’s a side to him that I didn’t know, and also, he’s still obviously traumatized or struggling with what happened to him. So there’s not darkness, but there’s a side to him that I didn’t know existed. And what do I admire about him, I think you asked? I guess his humor and his, just, buoyancy – his natural ability to keep going no matter what’s wrong. And I guess, also, his just absolute dedication to Claire is admirable and inspiring.

CL: If you were sitting across from him at a table, what would you want to ask him?
SH: Is he a natural ginger? Or does he dye his hair once a month?