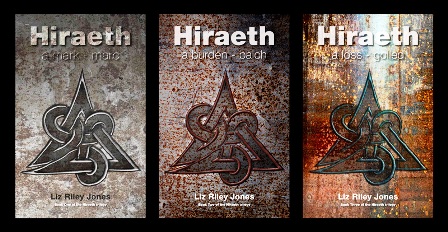 When sculptor Samantha Holland struggled to express herself in three dimensions, she reached for pen and paper.

Amazingly, those first few notes scribbled by Samantha Holland eventually became a single story. Within a few years, her exploration of writing led to the publication of three novels – the Hiraeth trilogy – under the pseudonym Liz Riley Jones.

“Writing a book and making a sculpture are similar in more ways than one might imagine,” explains the artisan via e-mail. “Each needs a strong basic structure from which everything else hangs, and both media rely on multi-faceted layers to work effectively as a whole.”

While the Hiraeth trilogy takes place in modern Wales and Ireland, the over-arching plot is largely inspired by Celtic history and mythology. Telling the tale of a hidden druidic community, it follows two main characters: Mona is an orphan who finds herself in danger while discovering her own druidic ancestry. Cai is a warrior who turns out to be Mona’s love interest.

The word “hiraeth” cannot be directly translated into English, but it is associated with grief and longing for home. The individual book titles are shown in both English and Welsh: a mark – marc, a burden – baich, and a loss – colled.

“It is Celtic language that remains the key driver in the narrative.”

“The druidic community portrayed in the series represent first-language speakers in the Celtic West, and the dying ‘magic’ as those remaining languages struggle to survive. My 10-year long battle to become a Welsh learner ignited a fuse that has been smouldering ever since.”

Music is also a large element in the books – so important, in fact, that Holland included links to various Spotify playlists on the Hiraeth website. She describes the music as “an immensely powerful link” between the two protagonists.

“Mona has an old, tatty mp3 player, and Cai is gifted a brand new iPod. Both machines are symbolic of memory and growth because they contain the music loved by the people they love.”

The music on the website is broken down between “pink mp3” and “blue iPod,” but it’s also categorized by individual characters. Artists such as Glen Hansard, David Gilmour and World Party are all part of the mix.

“The genres range far and wide because so many different tastes are incorporated into the playlists – from Celtic folk to thrash metal, from opera to county.”

Holland’s stories draw from other concepts that have influenced her over time, including female empowerment, ecology, parenthood, and what she calls “the myriad nature of love.”

“I had been carrying the Hiraeth themes in my head for many years. Having the opportunity to delve and untangle them over the course of the trilogy has come as relief. In reality, there’s still a fair amount of unravelling left to do, but I am happy I have managed to tell the story that wanted to be told.”

She admits that writing can be a painful experience; dealing with characters, for example, was particularly difficult.

“Throughout the process, a few of the personalities I thought I had created constantly disobeyed rules of plot, timing and common sense. I often found them too difficult to fight, and ultimately gave in and let them have their way.”

Looking into the minds of multiple characters at once caused her to think and feel in ways she hadn’t before.

“That pain forces growth,” she notes. “The more you practice, the better you become. The last book in the trilogy is more confidently written than the first due to the years of time and practice between them.”

Now, the stories Holland never intended to write have been read by many. As a supporter of the Welsh language, she was thrilled when the Welsh Book Council deemed Hiraeth of Welsh enough interest to be sold from their Gwales.com website.

“I was surprised that it was so well-received. Both subject matter and genre are a little niche, and I wasn’t expecting the momentum the series has gained – both here at home and in North America.

For now, she continues her dual-role of both sculptor and scribe. She is currently working on other stories relating to the Hiraeth series and has recently finished a large sculpting project.

“Sculpture and writing are inextricably linked for me now. They are passions that change but never seem to lessen in potency, with one often triggering the other.”