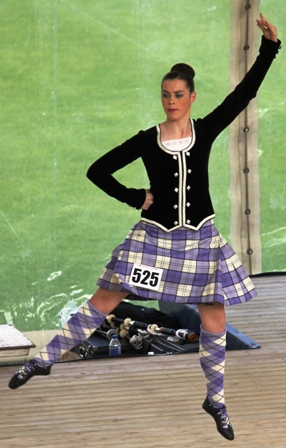 In one of New Zealand’s most Celtic corners, world class dancer Sarah de Bruin wonders why highland dancing is not considered a sport.

“In the area I live in there is quite a strong Celtic community,” says de Bruin via email. “The Northern Wairoa Scottish Society is involved in Dargaville, and the Waipu Caledonian Society is a well-recognized society in the Northland.”

The Waipu Highland Games is held annually on New Year’s Day, while the Whangarei Pipe Band holds an annual concert where the 18-year-old has been a frequent performer.

“Five shiploads of Scottish settlers arrived at Waipu in the 1850s from Nova Scotia,” she points out, noting she has danced at a re-enactment of that landing, “so I guess this is the reason for such a strong community.”

In a country better known for its runners and rowers, de Bruin has been dancing since she was four years old and was recently named among the 20 most accomplished highland dancers in the world.

“Highland dancing is incredibly physically demanding, requiring endurance as well as a great deal of muscular control to perform the complicated and intricate steps,” she notes, adding the risk of injury is inherent.

She says some other countries have made moves toward regarding dance as a sport but New Zealand has not, perhaps because dancing has yet to acquire a country-wide profile.

“The physicality of dancing is not really taken seriously. Dancers don’t have access to the same support they would have if they were in gymnastics or another sport.”

Funding is also more challenging for dancers than athletes, she contends.

“New Zealand dancers have to travel to international competitions as there are not a large number of dancers here,” she shares, adding that distances become greater as dancers progress. “Travel is expensive.”

Interestingly, the same is true of athletes and the relatively small country sends its share to the Olympics.

“The (highland dancing) world championships are in Scotland. I have been unable to qualify for or receive any funding to assist me in competing overseas. As a result, my trips are all self-funded with a few donations from businesses in Dargaville which cover entry costs. Each year I pay for my own airfare and accommodation in Scotland and I am extremely lucky that my parents pay the rest.”

That is particularly notable, considering de Bruin has two younger sisters who are also dancers. Fittingly, perhaps, her mother is a kilt maker.

Many of de Bruin’s Scottish ancestors – Johnstones, Stewarts and Flemings among them – made the long journey from Scotland to New Zealand a few generations ago.

“I am a New Zealand European with Scottish, Irish, English, German and Dutch ancestors,” she explains. “Four of my great-grandparents immigrated to New Zealand from Scotland – therefore, I have Scottish blood on both my mother’s and my father’s side.”

It is quite possible she was genetically predisposed toward highland dancing.

“My grandmother and her siblings used to do highland dancing and Grandma also used to teach. When I went to her house when I was young she would put on the bagpipe music and I would dance to it. So I suppose this was when I first became exposed to it.”

As a three year old, she saw a highland festival advertisement and demanded to be taken to the event.

“I love the feeling of accomplishment you get when you finally fix something you have been working on and the adrenaline rush of performing on stage. It keeps me fit and healthy and makes me feel strong and powerful.”

Her years as a dancer have provided her with an extended family and a love of travel.

“The rewards are having so many opportunities other people my age have not had. I have travelled to Australia to compete 12 times, as well as travelled to Canada and Scotland three times. I have formed very strong friendships with other dancers, both here in New Zealand and overseas.”

In addition to placing among the world’s top dancers at the World Junior Highland Dancing Championship in Scotland last year, she has also placed highly in competitions in Tasmania and Canada.

Her immediate plans are to perform in the Royal Edinburgh Military Tattoo in Wellington and to compete over Easter in Australia.

De Bruin, who operates her own dance studio, will continue to teach a small number of students via Skype when she heads off to university this year to study biological sciences and history.