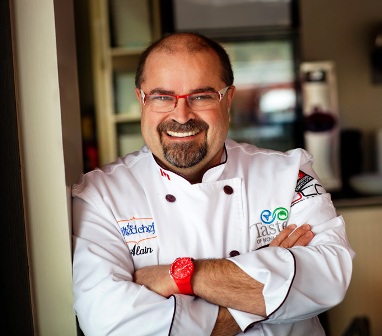 Bosse serves the title well. He has promoted Nova Scotia and Atlantic Canadian food at home and abroad, teaching both aspiring chefs at Cordon Bleu institutes and children in elementary classrooms, preparing dinner for the Prince of Wales, and travelling through North and South America, Europe and China to deliver presentations on Atlantic Canadian products.

“When coming to Atlantic Canada everyone goes for seafood, and so they should,” advises Bosse. “We have some of the best seafood in the world – but don’t limit yourself; we have amazing chefs who are doing charcuterie, foraging for food stuffs, taking the time to develop relationships with farmers who are raising  grass fed meats…we are truly becoming a culinary destination!”

Bosse is originally from Edmundston, New Brunswick, but living and working in Nova Scotia has influenced his culinary style. “Because of the huge Celtic heritage in our region, everyone cooks a little Celtic from time to time. Cottage Pie and mince appear regularly at home, a local butcher produces Lorne sausage for me – I hope to make my own someday soon – and who wants to eat plain, old fudge when you can eat tablet?!”

His travels outside Atlantic Canada have also had an impact on his profession and palette. “When you go to a different country and eat food that is inherent to that place, you are tasting their history, in some cases their struggles, and their triumphs…food can be an amazing storyteller if you take time to ask the questions.” 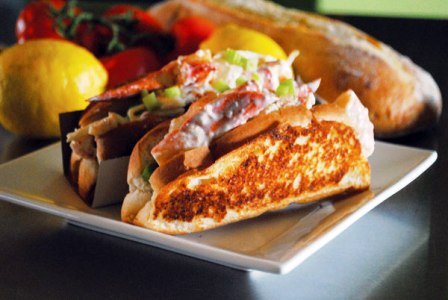 In a bowl mix the lobster meat, mayonnaise, celery, salt and pepper to taste. Butter your hot dog buns on both sides and grill them until nice and golden. Open your grilled bun and place a bit of mayonnaise on the bottom of the bun; then add 3-4 spinach leaves to each. Spoon the lobster mixture into the centre of the bun, serve and enjoy! Serves 6