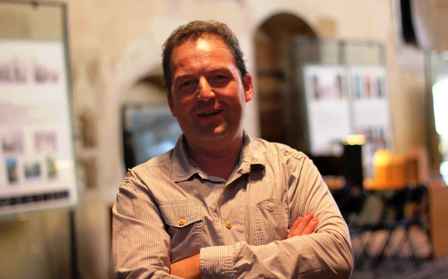 The big and bright windows of Auberge du Pont d’Acigné allow diners to enjoy tranquil views of the Vilaine river while they indulge in les créations du moment.

Chef Sylvain Guillemot and his wife Marie-Pierre opened their Breton restaurant, just outside Rennes, in 1995. Ten years later, the eatery received its first Michelin star. They earned a second in 2013.

“The proudest moment was definitely getting the second Michelin star,” Guillemot recalls. “The phone call from Michelin to let us know was such a surprise.”

Visitors to l’Auberge are treated to Guillemot’s culinary signature – “cuisine d’instant et d’instinct” – a style partly inspired by his time working at the three-Michelin-star restaurant L’Arpège in Paris. “It was beside Alain Passard I learned that recipes are always changing,” shares Guillemot. “The most interesting part is not what is being prepared, but what is still to be made.”

Guillemot is the former president of Tables et Saveurs de Bretagne, an association of 41 of Brittany’s most talented chefs. He is also enthusiastic about his region’s producers.

“My favourite moments are the feelings rediscovering the products each season. I go to the market every day to find the freshest ingredients from the local, independent producers.”

Regional products are a muse for Guillemot’s creations, and in turn Marie-Pierre creates wine lists “in synergy” with her husband’s cuisine. “The guests come to be surprised,” Guillemot muses, “ and to rediscover ingredients that they know, paired in unusual ways, like tarragon with quince, and buckwheat with apple…” 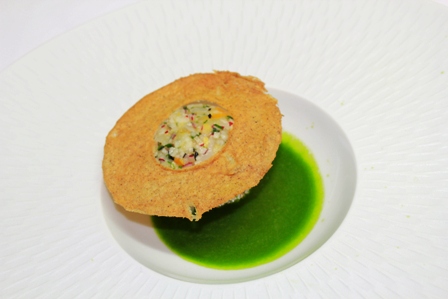 For the broth, separate the watercress leaves from the stems and blanch them before putting them in an ice bath. Heat up the chicken broth and put the watercress, once drained, in it. Mix it together before passing the coulis through a tamis/sieve. Keep the broth warm. For the scallop balls, dice the sea scallops and season them with the olive oil, salt and black pepper. Then form four scallop balls, one for each portion, and wrap each in plastic wrap. For the topping mix, dice the radish, lemon, chive and haddock. Mix them together and keep them in the fridge. To make the buckwheat crisps, mix the buckwheat flour, boiling water, butter and egg whites in a bowl. Let the mixture rest for a little bit before spreading it in circles on a non-adhesive surface and bake in the oven at 160°C /320°F. To assemble the dish, first steam the balls of sea scallops (still in plastic) for 2 ½ minutes. Unwrap the scallops and set them in the centre of each plate. Add butter to the warm broth, just before adding it to the plate. Pour some broth around the scallops. Place some of the lemon-radish-haddock-chive mix on top of each scallop ball. Finally put the buckwheat crisps on top. Et voilà! Serves 4