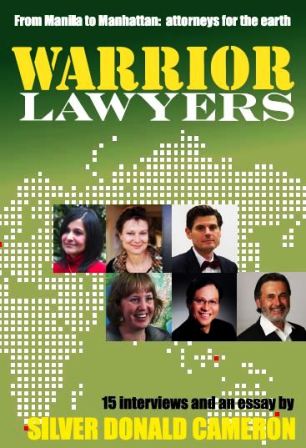 Silver Donald Cameron makes no bones about his bloodlines.

“I am five parts Scottish, two parts Irish, and one part French,” says the bestselling author and founder of TheGreenInterview.com.

With that kind of ancestry, storytelling came naturally to the scribe.

“As a kid, I loved reading. I thought the world of books was magical. Many years later, when I was about 20, it occurred to me that I might be able to make magic myself. And that’s still what I try to do.”

Now 80, the pro-activist enjoys the benefits of hindsight, looking back on a long and prolific career.

“I’ve been shaped by my time and place more than I expected – I set out to be a novelist, and I like to think I’ve become steadily better at the craft. I’ve also had the privilege of living in a very small community where I could see at close range many lives that were different from my own, an experience which broadened my understanding of human experience and human possibility.”

“Chris Beckett and I have been doing TheGreenInterview.com since 2010, doing in-depth interviews with great environmental leaders from around the world, and in 2012 we interviewed David Boyd, a wonderful legal scholar. By then we were suffering a bit from issue fatigue – there are so many environmental issues besetting us on every front – but David talked about the citizen’s legal right to a healthy environment, which is acknowledged in 181 of the UN’s 193 member nations, and gives every citizen a tool to use when the citizen’s environment is being degraded. Environmental rights are like the universal solvent, the unified field theory of environmentalism, the instrument that can be used on all the issues. And citizens around the world, particularly lawyers, are making fabulous use of those rights. But Canada and the US are among the handful of nations that don’t have them. So we went out to find the stories from around the world that would show those here at home what we’re missing, and what it would mean to us if we had those rights. Along the way we picked up some fabulous stories.”

Piecing the book together proved more than rewarding.

“Meeting all these inspiring people, and getting to see parts of the world I’d never seen before, including Ecuador, Peru and Argentina, which are leading the world in terms of environmental rights. I also re-visited European countries like Britain and the Netherlands. But mainly it’s the people; I made very good friends in places like South Africa and the Philippines, which is a huge gift.”

The process had a large learning curve.

“One thing that surprised me was that we’re really seeing the rise of a global citizenship to match – and resist – the globalization of the economy.”

“We’ve been at this almost full-time for four years, doing several movies, posting about 24 full-length Green Interviews, and doing the book as well. It’s been an obsession and also a runaway freight train. I self-published Warrior Lawyers, because there just wasn’t enough time to involve a publisher and still get the book out fast enough to release it in tandem with the film, Green Rights: The Human Right to a Healthy World.”

Both the book and the documentary film highlight the biggest issue facing humanity today.

“Extinction,” explains Cameron, “our own – and that of other creatures. That’s the ultimate destination of what Ecuador’s former energy minister, Alberto Acosta, calls “the economy of death” that currently rules the world.”

The solutions, he notes, “will require clear-eyed analysis and understanding, and a willingness to take absolutely uncompromising action.

“In Canada and the USA, that understanding has to involve genuinely linking up with the First Nations, who understand in their bones that the world is sacred, and that we are all part of that sacred reality. A superb and dramatic example, which the film talks about, is the successful anti-fracking campaign in Elsipogtog, New Brunswick, in 2013, when English-speaking and Acadian settlers joined hands with the First Nations to defend Mother Earth against depredations promoted by government, industry and the police. And they won. That has to happen again and again and again.”

He adds that, despite discerning belief, the average, everyday person can make a difference.

“Support the resistance to the economy of death at every level, and in every way that’s open to you. I do books and films and interviews, but others do protests, boycotts, critical research, political action, art and music and much else. Everyone has gifts, and this is a struggle so profound and fundamental that it requires each of us to give our own special gifts to Mother Earth in whatever way we can.”