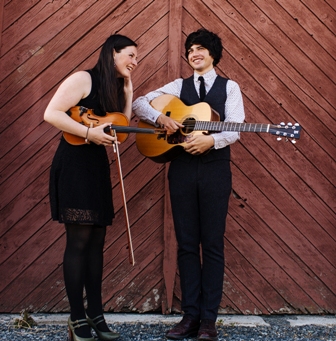 It is busy times for Celtic duo Qristina and Quinn Bachand.

Qristina, who already has university degrees in biology and health sciences, is working on a Masters degree in traditional Irish music performance at the Irish World Academy World in Limerick, while Quinn is returning to Berklee College of Music in Boston this fall, studying American roots music and audio production.

With an impressive collection of awards and scholarships already under their belts, the sonic siblings spent the better part of the summer months teaching music and performing across Canada, both as a twosome and with a bigger band, in support of their most recent release Little Hinges.

Raised in Victoria, British Columbia, the pair was exposed to all manner of music from an early age.

“My father is a luthier, so we always had instruments around us,” explains Qristina during a telephone interview. “My parents were and are great facilitators. They made things happen for us.”

Quinn points out that his mother, who is their manager, is Spanish and comes from a family of flamenco dancers. Her early preference, however, was for the Irish bodhran.

“We were just naturally interested in music because they had such a collection of instruments, tapes and vinyl.”

Qristina chose a violin and began playing at the age of five. Quinn, who is five years younger, also began with the violin, at age four. Both excelled at classical violin before embracing the fiddle. Their passion for performing took off when the two joined Daniel Lapp’s BC Fiddle Orchestra.

“The social part of playing in a group always appealed to me so I never took private lessons,” notes Qristina. “Music, to me, is an extremely social thing,”

She recalls two shows that piqued her interest as a youngster.

“I went to a highly choreographed show called Barrage when I was around 10 years of age, and then my parents took me to see Natalie MacMaster in concert in Vancouver. I just fell in love with the fiddle.”

Quinn, who now plays a guitar built by his father, started his sojourn with the six-stringed instrument at the age of 10 as a way to accompany his sister.

“I thought the guitar was a really cool instrument,” he shares. “It has led me to western swing and gypsy jazz, as well as Celtic music.”

Within a few years he was playing with multiple Juno Award- winning fiddlers Ashley MacIsaac and Natalie MacMaster.

“In the early days some people had issues with Ashley’s style because it wasn’t entirely traditional Cape Breton, but Qristina and I never encountered that.

“On the west coast we heard Irish, Scottish, Cape Breton and even Quebec styles, so there was no established form for us. We were, and are, open to everything.”

“I’m really inspired by Django Reinhardt. I like the old style rhythm guitar and styles made famous in France and Belgium,” he explains, adding that he also plays Irish tenor banjo, claw hammer banjo, and bouzouki.

Qrisitna’s early interest in Cape Breton fiddling was enhanced by a music exchange her mother organized.

“I was one of 12 young fiddlers to spend a week and a half in Nova Scotia. We went to the Gaelic College and to the local square dances. For the next two years I was completely captivated by the Cape Breton style.”

Her interest gradually drifted toward Irish music, but she says the performer that still inspires her the most is Scottish musician, singer and songwriter Dick Gaughan.

“I’ve decided to go with music in a bigger way and I know there is more music to digest in Ireland. It is only now I’m beginning to think in terms of a fulltime career.”

Both are enjoying teaching as well as performing.

“I’m going to be teaching with Troy McManus, one of the first Celtic guitar players I came across,” says Quinn. “He’s a legend to me so I can’t wait.”

The Bachands’ musical development is mirrored in their three albums; the first two are entirely instrumental, however Little Hinges features Qristina’s sultry vocals.

“I’ve always loved to sing but performing in festivals gave me the push I needed to add vocals,” she muses. “Quinn is also singing more and he has a great voice. We’re developing, working it out slowly.”