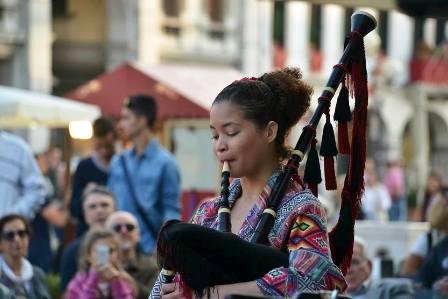 Tradition, heritage, and the musical vibes of Cuba meld seamlessly when Sorah Rionda plays both the gaita asturiana – a lesser known bagpipe once common in the north of Spain – and the more widely played uilleann pipes. Read more here!

“Without realizing it, I developed my own version of pipe music,” explains the 26-year-old, who has been piping for eight years.

“The reasons I play and sing today are simple – the sound of the instruments, the joy when I am playing them, and the magical melodies I discover.”

The gaita asturiana, the first pipes Rionda learned to play, are believed to have been brought to Galicia by the ancient Celts. Their use declined over many years, but recently the music has been experiencing a revival.

Though she now makes her home in Italy, Rionda is Cuban-born, with family roots in Spain, Africa and Asia. She credits her great-grandmother with igniting her passion for music.

“During my childhood in Cuba I used to spend the evenings with her – she was a passionate lover of music. We cooked together, listening to the wonderful trova tradicional Cubana on the radio, and she often sang and played guitar for me.”

Rionda believes it was those melodic evenings that started her on the path to a music degree in guitar and singing. She began studying guitar as a young child, and was 13 when her mother gave her a cassette of José Ángel Hevia Velasco, known professionally as Hevia, playing the Asturian pipes or gaita.

“I quickly fell in love with the gaita’s sound,” she recalls.

Five years later, while on her way to a choir rehearsal, Rionda discovered the Asociación Asturiana in the same building.

“I knew a girl, a bagpiper, who told me about their Asturian bagpipe band and the following week I started playing the gaita asturiana, becoming a member of the Banda de Gaitas de la Habana. I was very curious about this instrument, which was, at that time, not very well known among Cubans. Through the help of teachers, and people in the international Celtic music field, I was able to broaden my musical horizons.”

Band instructor Flavio R. Benito guided her through a repertoire that included traditional compositions by legendary gaiteros such as José Remis Ovalle and the gaitero Libardón.

“After learning the traditional music, dances and culture from Asturias and Castilla y Léon, as well as the uillean pipes and beautiful tunes from Ireland, I arrived at a point where I mixed in Cuban melodies.”

After participating in the Brintaal Celtic Folk Festival in Italy in 2013, Rionda was inspired by the variety of music, the drive of fellow musicians and the enthusiasm of fans, to begin work on her first recording, Hebra de luz.

“It is a thread of words and melodies that hug me like whispers,” she explains about her self-produced album.

Hebra de luz, she contends, is the tale of her origins, stories and influences, told through ancient airs, folk pieces and her own compositions, which gently alternate traditional Celtic and modern elements.

“The CD contains a song of my great-uncle Graciano Gómez, a famous songwriter and instrumentalist in the trova tradicional Cubana,” she says, adding, “It combines the colourful and endless fusion inside Cuban music with the unmistakable gaita asturiana.”

Rionda is excited by the growing prominence of Celtic music in Cuba as a result of workshops, concerts and broadcasting, and she points to increasing interest in Italy, also.

“Many Cuban bagpipers have been studying uillean pipes since childhood. And here in Italy we have an Italian Uillean Pipers’ Association, of which I am a member. It was founded recently, and its objective is to introduce the instrument through more workshops, concerts, sessions and festivals.”

While working as a guitar teacher at various music academies, Rionda seizes every opportunity to present the bagpipes, hoping that she can “wake up” the curiosity of young musicians. She also plans to seize every opportunity to further study the uillean pipes and Irish culture.