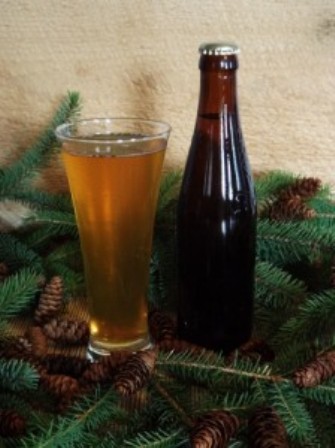 Winter 1535, and the fleet of French explorer Jacques Cartier lay, immobilized by thick ice at the mouth of the St. Charles River, in the area that would become Quebec City.

For Cartier, who was born in Brittany, and his men, the Canadian winter must have presented a strange and threatening landscape – the ice on the river lay almost six feet thick and the snow on the shore was four feet deep.

The sailors, who had left home in order to search for the fabled Northwest Passage to Asia, were marooned and began falling ill then dying from scurvy. Cartier wrote that by the middle of February, “out of 110 that we were, not ten were well enough to help the others, a pitiful thing to see”.

Death by scurvy is terrible – the disease, which is caused by a lack of Vitamin C, initially causes symptoms such as lethargy, bone pain, gum disease and loosening of the teeth, followed by swelling of the body, convulsions and fever. It took the lives of 25 of Cartier’s men. The rest were in peril until Cartier was told of a cure for the disease known to the native people, the Iroquoians.

An Iroquoian, who was probably Dom Agaya the son of a chief, took pity on the Europeans and told them to boil the tips of coniferous trees, such as spruce, fir or cedar, and drink the infusion.

The Iroquoian shared this knowledge despite the fact he and his brother had previously been kidnapped by Cartier and taken back toFrance. As instructed, Cartier’s men boiled the bark of a white spruce tree in water and found the tea it produced quickly cured the sick. Amazed, Cartier called the recovery of his men a miracle.

In the years that followed, many European immigrants drank spruce tip tea to prevent the scurvy that was often caused by the settlers’ poor winter diet. The health benefits arose from the fact that spruce tips, especially the new growth, contain up to 50 mg of vitamin C per 100 grams.

The native people of eastern Canada also prevented scurvy by chewing the spruce tree’s inner bark and sticky gum. But the early immigrants, both French and Celtic, soon learned that when blended with molasses and yeast, spruce tips made a drink they’d loved back home: beer, and one that could be easily produced at any time of the year.

Brewing beer in the New World was difficult for many years. Grain was raised for bread or animal feed not for beer malt. Hops were rarely grown and expensive to import. Spruce tips quickly became a fair substitute for hops. Molasses offered a sugary alternative to beer malt syrup. Easily fermentable and a cheap by-product of the Caribbean sugar industry, molasses was already a staple of every immigrant’s larder.

The immigrants took naturally to the new drink; French fur traders, explorers and settlers appear to have been begun brewing spruce beer sometime in the early 1600s.

Irish and Scottish immigrants often toasted a handful of oats or bran on a hot stove then added it to the boiling spruce and molasses for a taste of home. The New England Colonies made thousands of gallons yearly and it became part of the culture, much like rum.

However, spruce beer’s low alcohol content – about five per cent – meant that it was considered a wise alternative to rum. Wives and children were allowed to drink it and even teetotalers enjoyed it. The beer was so popular that recipes for spruce beers are found in many early household books. The Hudson’s Bay Co. instructed staff at its many posts around North America to encourage the men to “partake of the sensible sound drink that never made a drunkard”.

But it was the military that truly spread spruce beer across North Americaas, wherever the military went, spruce beer was made. In 1759, British General Jeffery Amherst ordered that spruce beer be issued to all ranks daily. In the same year, The Daily Order for Highland Regiments in North America stipulated that “Spruce beer is to be brewed for the health and conveniency of the troops which will be served at prime cost. Five quarts of molasses will be put into every barrel of spruce beer. Each gallon will cost nearly three coppers.”

In Atlantic Canada, spruce beer was particularly popular and immigrants brewed it well into the 20th century. Joseph Banks, writing in 1766 about Newfoundland, described spruce beer as “the common liquor of the country” and Patrick Devine noted in 1900 that “Barrels and barrels of spruce beer would be sold out in a single day” in many Newfoundland towns. It was referred to as the “cup that cheers but not inebriates”.

If you’d like to sample an old-fashioned “pint o’ pitch” like early French and Celtic emigrants, try this simple recipe for Spruce Beer:

-A couple of dozen spruce tips, about 10-15 centimeters long. Try to get the year’s fresh growth at the very end of the limb. The black spruce is the preferred species but black and white spruce can be used with equal results
-One liter of molasses
-A ten-liter food grade plastic pail
-Five plastic two-liter pop bottles with caps cleaned and dried
-A packet of baker’s yeast

Bring all ten liters of water to a boil and toss in the spruce tips. Let them boil for 40 minutes minimum. With experience, you will know how long to boil the tips to suit your taste – longer boiling times make stronger-tasting beer. Carefully strain the liquid through a clean cloth into your pail, over the molasses, and mix thoroughly. Once the mixture cools to blood temperature, stir in the baker’s yeast. After it starts frothing steadily, cover with another cloth and tie a string around it to keep out the dust. After three-four days, pour the beer through a cloth-covered funnel into the pop bottles and screw the caps on tight. Wait a week before tasting. The flavour is unique: a smoky spruce and quite pleasant.