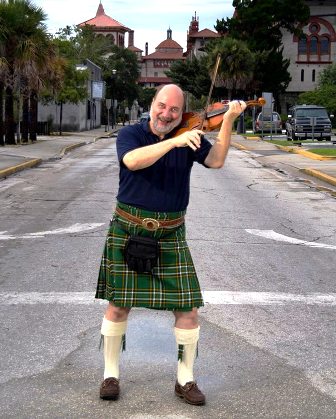 Celts of all sorts will gather under the sunny skies of Florida over the coming days for the St. Augustine Celtic Music & Heritage Festival. Recently we spoke with producer Albert Syeles about this weekend’s festivities.

What is your own heritage?
My mother’s family, O’Donnell, came to the US from Letterkenny in Donegal. And although my father was born in Hungary, my DNA is 51% Irish. So even he had some Irish blood. I grew up singing many of the traditional Irish songs alongside my parents around the house. And that surely helped me develop my deep love of music.

When and why did you get involved with the Festival?
We founded Romanza in 2009 to produce a festival that would bring attention to all that St. Augustine offers in the areas of arts of culture. We were still researching and organizing when in 2010 the Irish pubs in town wanted a nonprofit to seek funding and run an Irish Festival. We already knew aboutSt. Augustine’ remarkable Celtic cultural heritage, so we thought it would be a great way for us to start.

What are your roles and responsibilities there?
I am President of Romanza. We produce three big annual events and other smaller ones. My role is to provide vision, leadership, promotion and grant-writing.  We have a very strong all-volunteer group of leaders and managers, who fill a number of roles to ensure the successful production of our events..

Why is it an important event for the community?
St. Augustine just celebrated its 450th anniversary as the Nation’s Oldest City – the oldest continuously occupied European Settlement in the US. Many people don’t realize that the 800 colonists and soldiers who founded St. Augustine in 1565 came from the northern Celtic region of Spain. St. Augustine was founded by Celts. Spanish Celts!” The people ofour Sister City, Aviles Spain, and the surrounding regions are of Celtic descent! They still have their own language and share many traditions as well as DNA with the Irish and Scots and celebrate their Celtic roots with the annual “Festival Intercéltico de Avilés”! Here we celebrate also our Celtic roots. Over half the population of St. Augustine can claim at least one Celtic ancestor, according to USA Today. St. Augustine’s has an amazing Celtic history, including many Colonial Spanish and British Governors and historic vicars of Celtic decent like Padre Miguel O’Reilly, plus the Hibernia Regiment and fascinating stories of romance and mystery involving Scottish and Irish colonial soldiers.

Who traditionally attends the Festival?
The St. Augustine Celtic Festival is a family event with something for everyone – Ethnic music, dancing, food, Scottish Highland Games, Clan heritage and entertainment for children. A majority of Festival attendees don their kilts, tams, sashes or green attire to display their Celtic pride. The audience is a true part of the atmosphere of the event. The Festival is attended by people of all ages. The dominant age range is 35-54 (54%). That fan base, according to FaceBook, is led by women (68%). The music is really top-notch, the shopping is first class, and the food is delicious. A lot of folks stay all day and come back the next. Plus the bands love playing here, because we treat them well and they get to see, and even perform with, so many of their friends.

What can they expect this year?
Each year we work hard to make the Festival better and better. The Festival kicks off on Friday evening with a Whiskey Tasting event, plus a special performance by Dublin’s Irish Tenors and the Celtic Ladies, for the First time in Florida. Saturday morning begins with the St. Patrick Day Parade, followed by the opening of the 2-day Celtic Festival.  Nine premier Celtic bands from Ireland, Scotland, Canada and the U.S. perform on the main stage March 12 and 13. Albannach, Dublin City Ramblers, Emish, Emmet Cahill, Poor Angus, Rathkeltair, Scuttered the Bruce, Searson and Seven Nations…and there’s even more entertainment on our second stage! Many people come especially for the Scottish Highland Games competitions. Clans from the Celtic Nations are represented, bringing with them their tartans, language and sharing stories of their ancestors. In addition, we offer authentic Celtic food and artisan crafted Celtic merchandise vendors. Finally, there is a kids’ zone providing a variety of games.

How has the event evolved through the years?
The festival started in 2011 with 1,500 in attendance, and in just five years had grown to 16,000 and moved to the much larger events field, but still in historic Downtown St. Augustine. It is already becoming recognized even internationally as one of the fastest-growing and “arguably the finest collaboration of Celtic artists assembled in the United States”.

Will you remain involved with the event in the years ahead?
We plan to keep the Celtic Festival growing. It’s a big hit, and proceeds help fund Romanza’s other community events, including our 10-day-long St. Augustine’s Romanza Festivale of the Arts in May. I am on Romanza’s Board of Directors and plan to continue as President as long as they will have me. My wife Pat is also on Romanza’s Board, and she serves as Secretary/Treasurer as well as Newsletter editor and publisher. We obviously love what we’re doing, so I think we’ll be around for quite a while.

How else are you involved with the Celtic community there?
In addition to the Celtic Festival, we also produce the only St. Patrick Day Parade in Northeast Florida, drawing thousands of residents and visitors to downtown St. Augustine.And this year we are developing an educational Celtic Tour of St. Augustine with assistance from a local tour company. Trolleys will shuttleenthusiasts to numerous historic Celtic sites in the “Ancient City” like the 200-year-old monument to the Spanish Constituçion of 1812 with the Irish name of then-presiding “Brigadier Governor Sebastián Kindelan y O’Regan” still proudly carved on it.

Is enough being done to preserve and promote Celtic culture generally?
We’re trying to do our part. Our Celtic Festival has brought awareness locally, nationally and internationally to St. Augustine’s Celtic roots. We are delighted to see remarkable growth around our Historic Coast regionin the demand for bagpipers, Irish pubs and concerts from touring Celtic bands outside of our own productions.

What can we be doing better?
Celtic music has been successfully adapting and evolving, while still preserving, to lead the way to a deeper interest in our culture and other Celtic arts, especially among younger audiences. And heritage tourism is becoming more and more popular.Make it fun and educational at the same time, and Celtic heritage will not only survive, but will thrive.