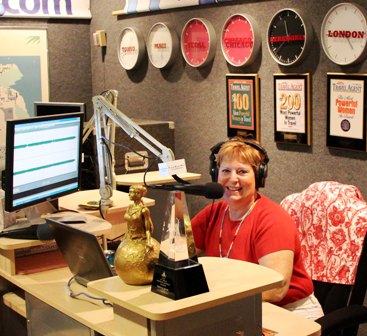 “My mission has always been to educate and motivate people to travel to great places,” says Stephanie Abrams via email from her home in Massachusetts. “Places that I believe they will return from enriched, enhanced, inspired and uplifted, and somehow knowing that they are better people because of the experience they just had, whether they are travelling for business or pleasure.”

Both of her radio shows – Travel with Stephanie Abrams and Travelers411 ® – began as one hour programs, expanded to two hours, and eventually evolved to their current format of three hours. She recently reached the milestone of 3,000 broadcast hours.

Abrams’ broadcasting career began in 2002 when she was invited to talk about travel on a local business radio show. The response was so strong that she was recruited to do a regular 15 minute segment each subsequent Sunday.

“St. Patrick’s Day 2002 came on a Sunday,” she recalls. “I suggested to the host that we do the whole show on Ireland, and I jumped on the chance and set everything up.”

Abrams arranged for the broadcast to take place in St. Patrick’s Centre in Downpatrick, County Down, in Northern Ireland, inviting key personnel from both the Irish business sector and the tourism industry to participate.

“I was boarding a plane from New Jersey to fly to Ireland, and just as I was stepping aboard my cell phone rang. It was from the CEO of the radio network offering me my own radio travel show. Needless to say, I flew to Ireland higher than the plane.”

While she admits that her experience with radio may have been limited up until that point, the timing could not have been better after 16 years of working with a major travel company.

“From 1986 to 2001 I was second in command of a $1.5 billion U.S. travel company. We were a travel agency franchise company – akin to the McDonalds of travel agencies – and part of my responsibility was to grow our global presence in 21 countries by developing commercial partnerships with leaders in the travel industry worldwide.”

“After 16 years of super-dedicated service – and making a significant contribution to the growth of the company I worked for – it took less than three minutes for my boss, the CEO, to tell me I didn’t work there anymore.”

Although a new adventure, radio soon proved to be one way to hold onto her passion for travel. Given her experience, however, the challenges were not particularly daunting. She notes that she had previously been recognized by Travel Agent Magazine as one of the 100 Most Powerful Women in Travel, and she had no difficulty choosing locations or attracting guests for her show.

“I come from a history of serving on advisory boards of major destinations, suppliers in the travel industry, and prestigious organizations in travel, so I truly understand both the destinations and the insider knowledge that comes from being a professional in travel and tourism.”

Abrams believes listeners find her travel shows engaging, and points out more people are travelling than ever before.

“We have produced programming on location in Asia, Hawaii, Europe, the Caribbean Islands, and from all over the U.S. In Canada, we have done remote broadcasts from Montreal.”

She estimates that 70 per cent of her interviews are done by phone. The pieces are podcast for a year, and then archived in the notes for each show, creating a historical reference.

And while her job may be mostly in front of the microphone, she also ensures that her shows have sponsors. Along from the emotional rewards that come via feedback from listeners and visitors to her websites, Abrams enjoys shining a light on unique travel destinations.

“There is the satisfaction of being able to bring under-marketed, best-kept secret destinations and the nooks and crannies therein – as well as the travel services I believe are important to travelers – to my audiences.”

Her own favourite destinations include the Scottish highlands, the south and west coast of France, St. Kits and Jamaica in the Caribbean, Portugal’s Madeira, and Montreal. But it is Ireland that has captured her imagination – so much so, that she has chosen to write her first travel guide about the Emerald Isle.

“Ireland is the quintessential destination that fits my mission,” she shares, adding that the country can match any interest, whether in arts, literature, music, dance, history, spirituality, cooking, baking, sports, hiking, biking, architecture, gardening, jewelry-making or whatever.

“You’ll find it in abundance – from ancient to modern – on the island that is Ireland. And there is one other special ingredient, and that is the people. “

Centuries of enduring hardship have failed to sour the Irish spirit, she notes.

“Instead, you find people who are the heart of generosity; people who don’t know what a stranger is and embrace every visitor as part of the family, which includes those who are not part of the Irish Diaspora; people who have a great sense of humour, and who haven’t met a problem they could not beat by ignoring it.

“I have travelled all over the world and I’ve met many wonderful people on every continent but there is nowhere on earth where the intersection of incredible culture and overwhelmingly wonderful people converge on one spot. The most difficult thing about Ireland is leaving it.”

The Giant’s Causeway on the Antrim coast of Northern Ireland may be her favourite spot.

Not surprisingly, Abrams is a great believer in enlisting the help of a travel agent in making travel plans.

“Too many think all you need to know is how to book an airline ticket and a hotel online which is what I refer to as “self-inflicted brain surgery.” An agent who specializes in that particular destination plans trips to that place every day so I find it hard to understand why people would want to go off anywhere without professional help.”

When she began her own travels it was in pursuit of something she calls “experience.”

“The trend today is to do things you love to do, or to try something new, but do it somewhere other than in your home region. Value for money spent is still in fashion.”

Abrams has also authored fictional novel called Rumors, and is working on a sequel which she plans to title Secret. She will also publish her Irish tour guide, 1001 Reasons to Visit Ireland, in the coming while. On the travel front, she has a long list of places she plans to go, including Galveston, Texas, and New Brunswick and Newfoundland in Canada. She will be back in Ireland before the year is out.

“The invisible threads that each trip has created in my mind over the years are woven into a fabulous, colourful, textured tapestry that is wrapped around me wherever I go.”