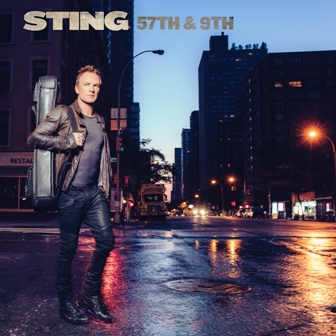 After thirteen years, Sting returns to the forefront of rock and roll.

“I never actually admit I’m making a record until very late in the process,” Sting explains – but he even by his own standards the announcement of his new album, 57th & 9th, came somewhat out of the blue. As the first musical offering from the former frontman of The Police in thirteen years, 57th & 9th – so called after the name of the junction that the singer “had to cross everyday on the way to the studio” – is a rocking return to the front line of the industry from one of its most respected songwriters.

The 65-year-old Northumberland-native, who recently discovered his Irish roots, is quick to mention that his recent album would not have come together through his unquestionable ability alone.

“So we booked some studio time and invited some musicians to come in, and we improvised,” he explains. “And this happened very quickly, very spontaneously. I work with extraordinary musicians who are very gifted and give me a lot to work with and my job is to make sense of it all.”

Despite his involvement in a combined total of over 100 million record sales, not to mention the sixteen Grammy Awards, three Academy Award nominations and CBE, Sting is still looking to “surprise myself and the people I’m working with and hopefully the listener.”

“To me the essence of music is surprise – both in the choices you make within a song and the choices about what you present to the public,” he agrees. “I don’t make music by any formulaic, magic process. I just follow my instincts – I don’t know where it’s going. On this album, we’ve ended up with something that is energetic and noisy but also thoughtful.”

The first single from the album to have been released, the barnstorming ‘I Can’t Stop Thinking About You’, is also a representation of how 57th & 9th is a journey through Sting’s own attitude to the artistry that has made his a household name.

“All I had was a blank sheet of paper in front of me, which looked like a field of snow with no clues on it as to what could be revealed there,” he says of the track’s origins. “So that first song I wrote actually became the first song on the album. It’s about that obsession, that obsessive search for inspiration, for a subject, for a muse, for the music to reveal something inside itself.”

As it turns out, this act of describing the artistic process through the art itself was just the catalyst Sting needed to churn out the further nine tracks that make up the album.

“I think you live in a permanent state of anxiety as an artist; you write a song and then suddenly you’re empty – what do you do next? But, I wrote this song very quickly,” he muses. “I basically forced myself to keep doing it – finish song, start another one. Finish song, start another one. And I had a timeline given to me by my manager. I’m not normally presented with a deadline but I sort of enjoyed having that pressure. It just gave me the impetus to create something more spontaneous, with an energy that we don’t have all the time in the world, so let’s use the time well.”

And if  ‘I Can’t Stop Thinking About You’ is an insular track, the rest of the album looks outwards to the recent major events that have had an effect on Sting, from tackling the refugee crisis on ‘Inshallah’ – “I think it’s really the crisis of the century” – to his “satire about climate sceptics,” ‘One Fine Day’. The track’50,000’, however, was “a response to the passing of a lot of cultural icons this year” – something which has obviously affected Sting on a personal level.

“It’s really about how surprised we all are when one of our icons dies, because we’ve sort of invested them with immortality in a way, so that when they die it really brings our own mortality into sharp focus,” he remarks. “I wanted to respond to that as a rockstar myself. I’ve been in that position, I’ve had hundreds of thousands of people singing my songs back to me, so I know what that feels like. But it’s an illusion; we are no more immortal or no better than anyone else. We’re all human beings and we are all too fragile. So the song is about that. It’s about those who die, but it’s also about me. And I think it’s a fairly honest look about what it’s like to grow old.”

But when it comes down to it, despite the critical acclaim and devoted fans, this rockstar business is still just a day-job for Sting.

“I don’t have a goal except to have fun and express something at the end of a day’s work,” he concludes. “You know, to have something to just take home to my wife and say, ‘This is what I did today.’ Like most people who work, you need to have result at the end of the day and that’s all.”