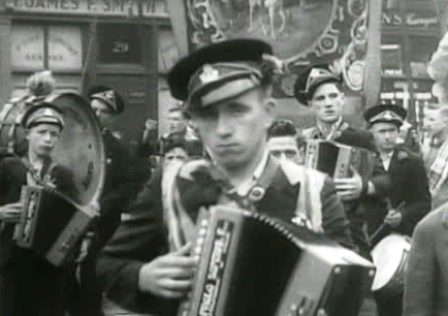 This story was inspired by a report entitled ‘EXTRAORDINARY CONDUCT OF A POLICEMAN AT ARDGLASS’. The newspaper report describes in great detail, a case which appeared before the Court of petty sessions in Ardglass. A policeman had entered a shop in Ardglass and was accused of causing a breach of the peace by ‘chaffing’ the women in the shop about their name and their religion. The letter is entirely fictional. The original article appeared in ‘The Down Recorder’ in 1852.

I hope this letter finds you in good health. Thank you for your many letters, which we all read avidly. I cannot tell how much I miss you, particularly in the last week. You will not believe the time we have had. I will tell you the whole story without prejudice, and leave you to make up your own mind about the behaviour of our pernicious (married) sister. How I wish it were she who had gone to America and not you. But I have written of that many times before, so I will confine myself to a recount of recent events.

Emily and I were in the clothing end of the shop as usual. I was folding linen napkins and tidying the haberdashery, Emily was mostly lookingout of the window. ‘It was ever thus,’ I hear you cry.

We hadn’t had many customers until, in the middle of the afternoon; a policeman entered the shop from the bar at the back. He was very handsome, with black glossy hair and a little moustache. Anyway, he engaged me in light conversation, telling me all about his home town, Shannonbridge. I confess to never having heard of Shannonbridge before but it sounded wonderful.The policeman had a delightful brogue and dark, dancing eyes.When he heard that my name was Miss Hughes, he seemed entranced and kept repeating it, almost blowing in to my ear. I know this may sound a little strange, but he really set my heart alight.

Well, that was before our esteemed sister overheard him. She(jealous of course) rounded on him saying he was making fun of our family name. Then she started about our commitment to the Church of Ireland. She actually asked him what religion he was!

I was mortified. Who would ask a stranger that, andhe a policeman? Emily was almost hysterical by this stage, shouting about Protestants and Catholics and I don’t know what all. Daddy came up the passage and he started to shout too. You can imagine the scenario. By now the shop and the bar were jammed with people.

I was thinking the policeman should just leave but then he said, ’Can a man not have a chat with a beautiful girl?’  He looked straight at me and I blushed to the roots of my hair.

Emily was incensed and pushed that dolt of a husband of hers into the fray. As you know, he is no stranger to the Royal Irish Constabulary and took the opportunity to get his own back.

Two other officers took the policeman away, and now there is to be a court case. Can you imagine the Court of Petty Sessions in the Ardglass Court House, with Emily and me as prime witnesses? Witnesses to what? Some mild flirtation and bitter jealousy, that’s what. It really was a most extraordinary day.

How I wish you had been here! The row would probably not erupted if you had been here to ease the friction. You would also have met ‘my’ policeman. I know you would have agreed with my opinion of him.

Our esteemed brother-in-law, and expert in the law (wry smile) informed me the case would be called in the autumn. That definitely means a new hat. I couldn’t appear in the Ardglass Court House in the grey velvet hat I’ve had for two seasons. So perhaps every cloud does have a silver lining.

I’ll keep you informed with all the latest happenings, including appropriate clippings from the Down Recorder. I still miss you every day.

I remain your devoted sister,
Lucinda.

Rhonda Glasgow is a member of a woman’s writing group in County Down, Northern Ireland. The group is profiled in the February 2016 edition of Celtic Life International Magazine.