The End of the Earth 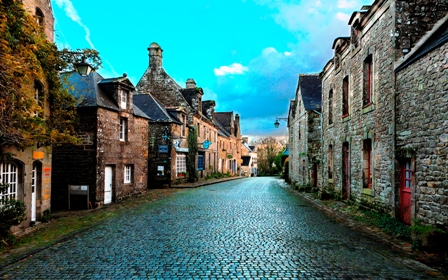 Most mornings when I wake up at my home in Nova ScotiaI head to the ocean, if nothing else, to stand there and reflect that right here the continent ends.

If I had the proper means, I could step off land and go straight across that ocean to those farther shores in Ireland, Cornwall or Brittany. I have an affinity for most any place on earth where the land meets the sea. I remember once standing on the rocks at Land’s End in Cornwall enamoured with the realization that, for England, this too was one of those exquisite peninsulas where the land gave way to the sea. Although I knew that France was somewhere south and a bit west of there, I didn’t have that much of a hankering to visit that not-so distant shore at that time.

But then I found out about Finistere. Yes, for those who recall their Latin, the name refers to yet another land’s end, or – as some of us prefer think of it – “the end of the earth.” To ancient folk on these shores – a sub-region of Brittany that has its own unique culture and temperament – that was what it seemed. And here was Finistere – catching my attention as a part of the Celtic world that I had never explored.

And so this past spring, my wife Linda and I flew to Paris, all the while me dreading the six hour drive from Charles de Gaulle Airport to this distant land in Brittany to the west. The ride, however, turned out to be most excellent, especially the backroads of Brittany that would take us to our rental cottage in the tiny community of Hanvec. We settled in nicely with a living room view of rolling farm fields and green forests and, after our first sip of wine, I pondered how it was that I had never visited or even thought much about this grand, green idyllic place. 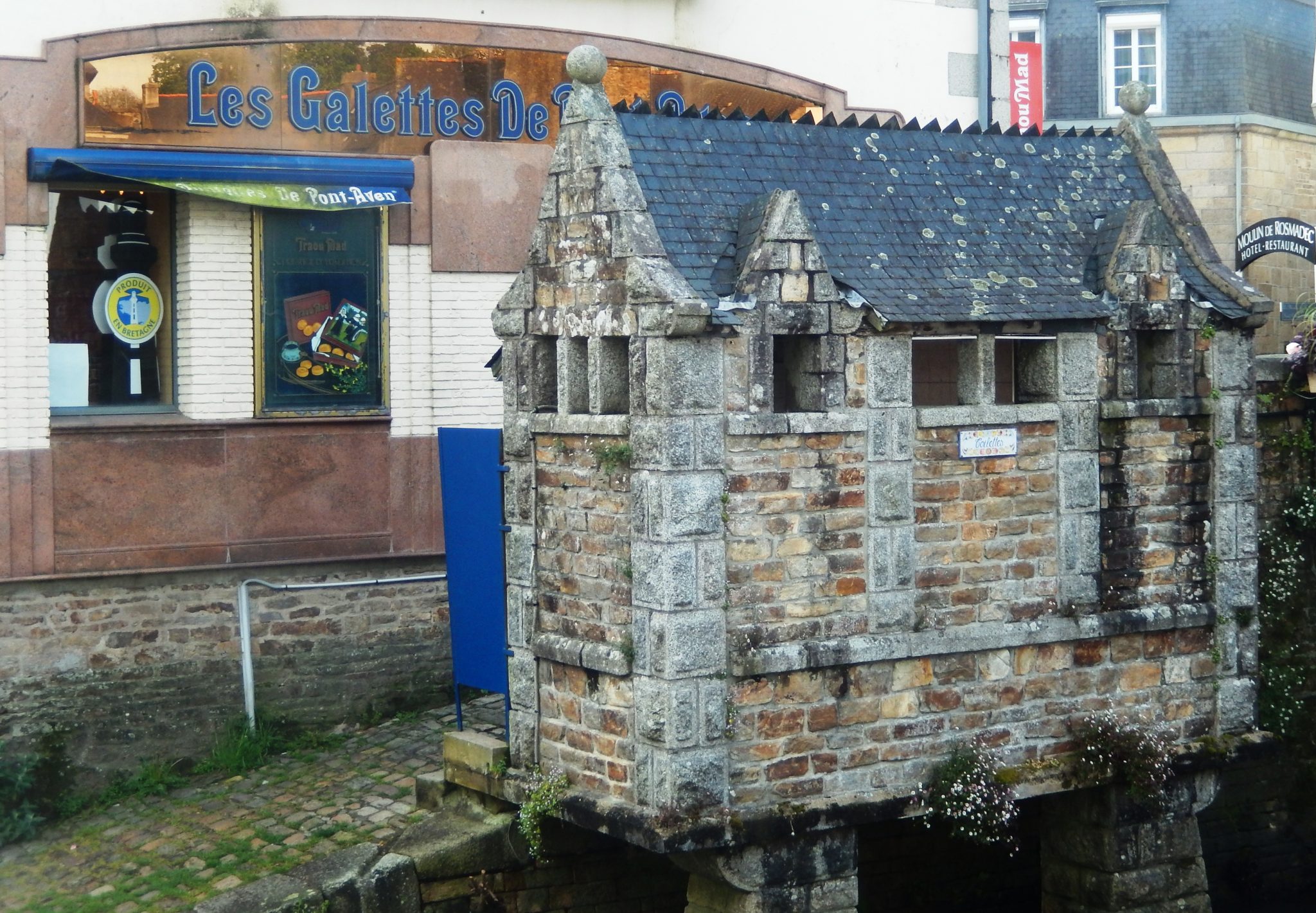 Various locales in Finistere had popped up on my radar before the trip. One of them was the town of Pont-Aven because it had inspired the painter Paul Gauguin in the 1880s. It also boasted “the world’s most picturesque public washroom.”

While I wouldn’t have flown to France just to see the well-photographed WC, I was impressed that it was a unique site – a tidy stone structure perched above a river in a village peopled with artists and tourists. Gauguin had spent considerable time in Pont-Aven, inspired by the surrounding beauty of the place before heading off to even more exotic Tahiti for inspiration.

Linda and I hiked the nearby Bois d’Amour on a trail running along the river with a multitude of wild flowers, marred only slightly by the rear of an abandoned factory that could not fully diminish the verdant romantic atmosphere.

Huelgoat was also on our agenda for the week because I’d seen pictures of massive moss-covered boulders and read about supposedly enchanted forests at the doorstep of the town. The hike through the boulders was most impressive with a mix of sunlight and mist that evoked images of angel wings in the crisp morning air. Although the “trembling rock” didn’t seem to tremble anymore, the passage down to the “Devil’s Grotto” was definitely a descent to another dimension.

Legends suggests that the boulders were strewn here by an ancient Celtic giant or by Gargantua, himself, who dropped his weighted load of rock because he had been served a bad bowl of oatmeal in town. There are Arthurian legends about the place, and more reputable research showing that this neighbourhood was once inhabited by a long-gone ancient Celtic tribe. Beat writer Jack Kerouac, of On the Road 1950s fame, is descended from ancestors in this unique corner of France, as well. I felt something strange and wonderful while hiking beneath the great boulders in the mossy canyon and would return there again to feel both the ethereal spirit of the place and the Kerouac connection that made the village so evocative for me.

I almost passed up on Locronan, a well-preserved and well-touted old stone town. Founded by Saint Ronan, it dates back to at least the fifteenth century and remains pretty and authentic enough that Roman Polanski came here to shoot his visually stunning feature film, Tess, based on the Thomas Hardy novel. It seemed to keep cropping up in tourist brochures – something that often sends me scurrying in other directions – but I felt wonderfully at home here, wandering the old cobbled streets among sturdy stone buildings. I even bought my wife some earrings and a sweater which suggests the town had worked its own mystical charms on this wary and usually miserly traveller.

Concarneau – “France’s third most important fishing port” – was another of those brochure towns and we headed for the ville close (walled town) along the harbour. A seafood lunch seemed in order and I bought the local skate dish which was tasty enough but filled with long thin sharp bones that made for an almost suicidal meal. Experts describe skates as “cartilaginous,” and that too made it less than appealing.

It could have been the skate that put me in a bad mood, but when we walked into the walled town and found it crowded with tourists milling through ancient stone buildings with gaudy shops selling mountains of Chinese-made kitsch trinkets, I found myself longing for the green rolling hills of Hanvec so we made our retreat.

Roscoff is a busy seaport that was to the north of Hanvec and we drove there through vast acreages of artichoke fields and canola crops. Roscoff’s damp stone streets reminded me much of seaside ports on the other side of the English Channel from here – Yarmouth and Portsmouth and the like. In fact, in Roscoff, you could board a ferry and make your way to Plymouth overnight, or even further to Cork in Ireland. Just outside of town, the Jardin Exotique is a bit of a surprise with its multitude of plants from many climates and continents.

And then there were the stories about “Onion Johnnies” – Breton farmers from years gone by who grew famous pink onions, boarded vessels with their bicycles, and sold them door to door in England, charming housewives with their accent and berets. I couldn’t help but wonder if these jaunting Onion Johnnies perhaps contributed to the population across the water. Talk about serving the customer.

My quest for the end of the earth led me to the Crozon peninsula and the several capes at some of the further points of land reaching into the North Atlantic. Pointe des Espagnols has a 60-metre high cliff looking across the narrows of Goulet de Brest, which is a strategic point of entry – both military and commercial – into the harbour of Brest, the largest city in the region. 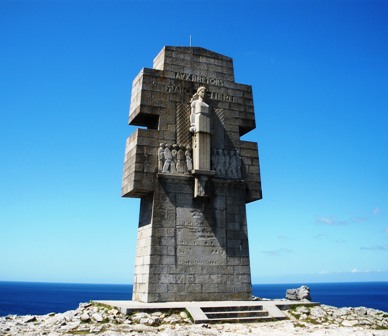 Pointe de Pen-hir has some grand views of the Atlantic from equally high cliffs, but it and also provides a sombre reminder of sadder days along these shores. For here stands The Cross of Pen-hir, honouring Breton fighters who continued their efforts against Hitler in World War II, even after the nation had fallen to the Nazis. Part of the inscription reads, “France has lost a battle, but France has not lost the war. In the free world immense forces have not yet given up. One day these forces will crush the enemy.”

Cap de la Chevre has sandstone cliffs nearly a hundred metres high. It was wild, windy and barren the day we were there, with extraordinary views south and east. But it was Point du Raz that I accepted as our symbolic end of the earth for this trip. The final narrow ridge of ragged rock stands high above the Baie des Trepasses, which translates as Bay of the Departed with “departed” meaning “dead.” This undoubtedly refers to the number of watery deaths that have occurred here through the centuries from ships crashing into and floundering on the spikey-toothed rocks. Gustave Flaubert and Victor Hugo made this wild and dangerous promontory famous in their writings in the nineteenth century.

Beyond the tip of land there is a lighthouse called La Vielle (The Old Lady) on a tiny rocky island named Gorlebella (farthest rock) that is visible on clear days. It has become legendary in photographs of mountainous waves slamming into and over the top of it. As I peered out towards it on a calm day, I could still imagine those saltwater behemoths pounding it over and over. 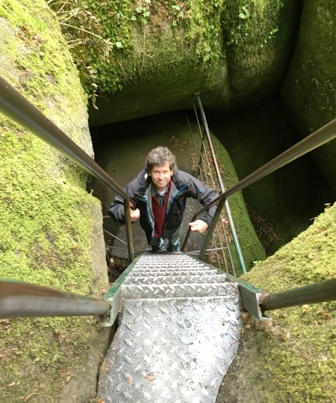 Point du Raz fit the bill for what I was looking for on this trip – a remote spot, much like Land’s End in England (but without quite so much commercialization); a grand spot for wind and wave and gull squawk, and an afternoon outing to a place of stark beauty where one could imagine both the civilized world left behind and the seaward mysteries that lay ahead.