The Fall of Stormont 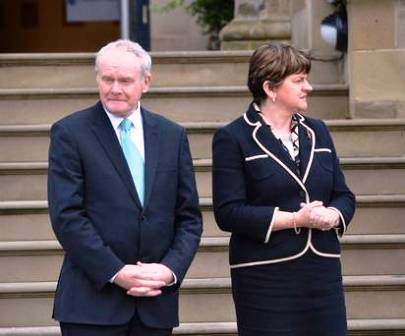 There is an irony about the ‘cash for ash’ Renewable Heat Incentive (RHI) financial fiasco that ended Arlene Foster’s tenure as First Minister in Northern Ireland and has precipitated an unexpected election this March 2nd. The political structure of the North of Ireland, so often characterized as an unpredictable ‘tinderbox’, was foiled by an administrative flaw in a heating scheme. This is burning not as tragedy but as farce.

In any case, the politicians’ recriminatory rhetoric produced sparks aplenty. In the past, such flare-ups typically played out with the hard-line parties holding out fiercely for a time, and an outside mediating force being brought in to tame them down. But this time the division may well be cataclysmic.

DUP leadership of the power-sharing Executive in Belfast was badly undermined by the tawdry financial cock-up, which was shouted up into a cacophony of sectarian wailing, when the focus should have remained on addressing the RIH issue. Instead, the scandal served to reveal quite how divided the Assembly really is and how incapable it is of confronting a serious crisis on its own.

Arlene Foster’s handling of the RHI scandal has been truly abysmal. Rather than taking her share of responsibility for the stuffing of 500 million pounds into the rathole of the Renewable Heat Incentive and admitting that it was an instance of gigantic mismanagement of public money, Foster portrayed the fallout as a Republican conspiracy to steal a march to hold the prized First Ministership in their hands. Having flogged that horse, she began to characterize her critics as misogynistic, which lost her considerable sympathy, notably among fellow female politicians.

Foster’s political career is at stake and she is grasping at whatever lifeline that comes within her reach. She continued to ignore pressure from all sides to step aside for an investigative report into RHI to be conducted. Then her Deputy First Minister resigned (under Stormont rules there must be a Deputy First Minister and Sinn Féin refused to nominate a successor). Martin McGuinness’ resignation letter read: ‘It is a source of deep personal frustration that [my] efforts have not always been reciprocated by unionist leaders. At times they have been met with outright rejection. The equality, mutual respect and all-Ireland approaches enshrined in the Good Friday Agreement have never been fully embraced by the DUP’.

With that, the fat is in the fire. McGuinness is quite right that a significant portion of the DUP is in denial of the Good Friday Agreement framework. Gone are the days when McGuinness and Paisley (who, for all his faults, ultimately did attempt to make the Belfast Assembly work) sat down together chuckling to themselves. It was McGuinness’ resignation that triggered the March election in Northern Ireland. That happened, coincidentally, against the backdrop of news that McGuinness is seriously ill (it is doubtful that he will ever hold office again).

Last year Northern Ireland moved tentatively beyond its sectarian bounds; that movement came from the bottom up, spurred by a grassroots movement, the People Before Profit Alliance (PBPA), whose candidates gained mandates in the May 2016 Assembly Election to transcend the traditional green and orange template of Northern political parties: Eamonn McCann got elected in Derry and Gerry Carroll topped the poll in West Belfast. PBPA illustrated that, with a dedicated surge, class-based politics can and should run athwart the assumption that Northern Irish voters will irreversibly vote according to their religiopolitical affiliation.

Centrist parties of both unionist and nationalist hues, the UPP and the SDLP, followed the PBPA’s lead by making gestures of co-operation with each other and by going into opposition together in the Stormont Assembly.

So what do all of these shifts portend for the forthcoming election? For the first time in more than a decade—and at a crucial time, given that Brexit is on the horizon—the centrist parties have a chance to regain some of the ground they lost since Sinn Féin and the DUP signed The St. Andrew’s Agreement in 2006. UUP leader Mike Nesbitt has said that he wants this election to be ‘a referendum on 10 years of DUP and Sinn Féin rule’. Moreover, if the UUP and the SDLP do gain support as fallout from the collapse of the turbulent DUP/Sinn Féin administration, there are grounds to expect that they would form a coalition with good potential to last.

Nesbitt may want a referendum on DUP/ Sinn Féin rule, but the forthcoming election will far more resemble a referendum on the sustainability of a power-sharing Assembly in Northern Ireland.DUP/Sinn Féin may well be returned again but if they fail to form a new government within three weeks of the election, Stormont will be suspended. Dublin will scramble to honour the guarantees of the Good Friday Agreement, but few in London will be willing to invest the time or political capital to shore up that effort. And here hard-line unionism will play its age-old favourite card: its alliance with the Conservative Party in British Parliament.

The Conservative Party has a majority in British Parliament but a very slim one, 329 out of 650 seats. The DUP holds 8 seats in British parliament. It is easy to imagine circumstances in which British Prime Minister Theresa May could badly need DUP support during this crucial year. If so, it would be quite wrong to assume that the current DUP leadership will bargain hard to defend the Belfast Assembly (they may well bargain to abolish it). For better or worse, 2017 in Britain will be dominated by Brexit. The DUP knows this and there is nothing they would like more than to form common cause with Little Englanders outside the EU. Direct rule of Northern Ireland from London could appeal just enough to the DUP and to the British Conservative Party to prompt them to prorogue the Stormont Assembly on a semi-permanent basis. Since its inception, the Assembly has periodically faced crises, leading at times to its suspension. But seldom has the crisis looked so bleak as now. The election on March 2nd is the biggest threat to power-sharing in Northern Ireland since the re-establishment of the Assembly at Stormont in 1998.