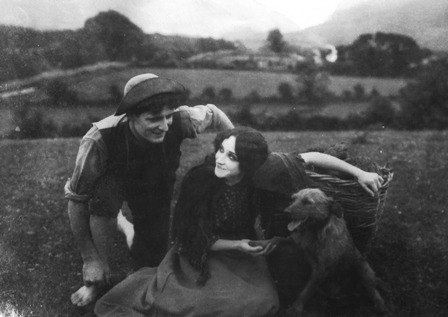 This story was inspired by a couple of articles in one edition of The Down Recorder’ in 1888 entitled – ‘Wholesale Poisoning of Husbands’ and ‘Strong Drink’ and a few lines about the late bandmaster of the Coldstream Guards, and the growing popularity of cocoa one the same page.

Mr Frederick Godfrey, late bandmaster of the Coldstream Guards died on Monday morning. He had suffered some time from some paralysis to his left side although this condition had not prevented him from living a full and active life.

The well-liked bandmaster was last seen on Friday 10thNovember in the Grand Café in High Street with a lady wearing a crimson velvet coat with a matching crimson velvet hat with a long black ostrich feather. He had become a regular customer of this newly opened coffee palace, the largest one in Belfast. He was often seen there sitting in the same corner on his own, or in the company of this lady, or different ladies. The bandmaster had become well known to the waiting staff in the Grand Café.

The identity of his lady companion is not clear, but many have seen her about town recently, and noted in particular her exquisite wardrobe. A number of gowns and coats of velvet and rich silks decorated with fringes have been remarked upon. The ornaments on her hats have been commented on, ranging from feathers and bunches of roses to a bird of paradise, certainly not often seen in Anderson and McAuley’s mantle department.

One of the waiters noticed on that Friday the couple arrived separately at the Grand Café. Mr Frederick Godfrey was there for at least half an hour drinking coffee and reading his newspaper before the lady wearing the crimson velvet coat with the matching crimson velvet hat with a long black ostrich feather appeared. By all appearances they were pleased to see each other.

While cocoa is one of the more popular beverages available on the Grand Café’s menu, it is believed that Mr. Frederick Godfrey was quite a coffee connoisseur. During his time as bandmaster in the Coldstream Guards he had become well acquainted with Café Society in Vienna, Salzburg and Budapest where the band regularly played.

Mr. Frederick Godfrey had a lifelong interest in music, playing the trombone, trumpet and tuba proficiently at a young age. He had commenced his military career in Bombay, combining his love of music with his military service and had at times also been stationed in Ireland, Canada, Bermuda and various African states. When he retired it was to Ireland.

It is thought he frequented the Grand Café to enjoy the refreshments on the extensive menu as well as to enjoy the music of the ‘Four Seasons’ string quartet who play there every Friday and Saturday. He particularly liked to listen to them playing Percy French’s new songs.

One regular customer in the Grand Café who was there last Friday noted he had been embarrassed by the altercation between the couple. He noticed Mr Frederick Godfrey’s lady companion left their table abruptly after a disagreement. He said their conversation and debate seemed to have been sparked by an article in a local newspaper relating to popular beverages.

The lady in the crimson velvet coat with the matching crimson velvet hat with the long black ostrich feather was overheard to say, ‘There is nothing more nourishing and warming in this cold weather than a cup of really good cocoa, Frederick, but the difficulty has been to obtain it pure. Why I read only this week that we may escape many a fatal shaft by drinking cocoa. It helps us keep well-fortified with pure blood and a properly nourished frame.’

‘It certainly helps keep you looking well, my dear’.

‘Epp’s cocoa is comforting and has saved me many a doctor’s billbut it does not taste half as good as the cocoa served here. Do try some Frederick.’

Mr. Frederick Godfrey replied, ‘My dear, I read earlier that the annual report of the Commissioners of Inland Revenue shows that consumption of alcoholic spirits is declining in the United Kingdom and especially in Ireland. The Commissioners think that the decline in spirits is due partly to the extended development of the coffee palace movement, like this one.’

‘Exactly Frederick. This coffee palace is quite splendid. Won’t you try some of the cocoa on the menu after you have finished your coffee? I believe the cocoa in the Grand Café to be the best in Belfast. Won’t you order a pot and we can enjoy it together?’

‘Thank you. The Victoria sponge here is delicious. I will have a piece of that please. However, you know what I would like most of all Frederick.

‘We have spoken of it often enough.’

‘My dear, what you want is simply not possible. Oh that it were, my dear.’

‘If you really meant that you would make it happen. It is within your power.’

‘I can take this no more, Frederick. I have waited too long. I can wait no more. Good day.’

Gleaming silver cutlery rattled on the French polished mahogany table and the fine bone china cups rattled on their fine bone china saucers distracting the customers in the Grand Café from their refreshments and conversation. The lady wearing the crimson velvet coat with matching crimson velvet hat with the long black ostrich feather pushed back her chair and rose from the table. She turned on her heel and bustled out of the establishment in a flurry.

Momentarily the murmur of conversation quietened. The ‘Four Seasons’ string quartet continued to play a Percy French tune drowning the sound of her boots tapping quickly on the polished oak parquet floor before she slipped through the heavy front door into the throng on High Street.

Apparently Mr. Frederick Godfrey did not rise to bid his companion ‘Good day’. He remained in his chair, in his favourite corner of the Grand Café finishing his pot of Vienna blend, listening to the ‘Four Seasons’ string quartet continuing to read his newspaper. Sometime later he was found slumped in his chair, the newspaper spread over his lap like a large, crisp, damask dinner napkin. At first the waiting staff thought he had fallen asleep.

A doctor was called and after examination Mr. Frederick Godfrey was taken to the Belfast Royal Hospital by horse drawn ambulance where he remained while his condition steadily worsened until he left this world three days later. For a few days the Grand Café had to close its doors while the Royal Irish Constabulary were examining the scene. County Inspector McBrattan advised that a post mortem was carried out. It found that Mr. Frederick Godfrey had been poisoned by a substance in his coffee. No other customers in the Grand Café that day or subsequently have been known to display similar poisoning symptoms.

The lady wearing the crimson velvet coat with the matching crimson velvet hat with the long black ostrich feather with Mr. Frederick Godfrey is under investigation and remains at large. County Inspector McBrattan has asked anyone who knows the identity or whereabouts of this mysterious lady to contact the RIC at Queen Street barracks.

Mr. Frederick Godfrey is survived by his wife Caroline and their children George, Mary, Robert, Christina, John, Edward, Anne and Thomas. It is understood his estate is extensive. ~ Story by Morna Sullivan

Morna Sullivan is a member of a woman’s writing group in County Down, Northern Ireland. The group is profiled in the February 2016 edition of Celtic Life International Magazine.