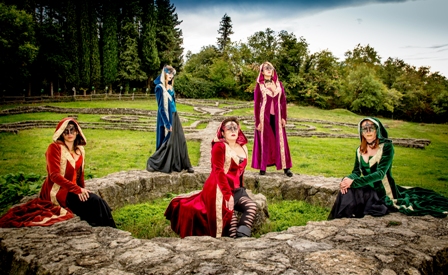 Italian by culture and classically trained, the all-female quintet The Green Clouds has embraced traditional Celtic music with a bursting enthusiasm, creating something vibrant and with a distinctive edge.

“Keltronic is our brand,” explains founding member Graziana Giansante. “We play because we need to play, and we are very happy to have found a unique way to express ourselves together.”

Keltronic, she notes, is a rare blend of Celtic and electronic, something she and her musical friends first brewed up in the northern Italian province of Teramo about eight years ago.

“We love traditional Irish and Celtic music, and no one does it better than a native Irish band. Our idea was to fuse the taste of Celtic music we love with our own culture.”

“We did that with an eye open to electronic music, which is a large part of our culture today. Celtic and electronic together became Keltronic, and with our classical instruments the results have been truly amazing.”

The unique sound, which generally includes refrains that audiences quickly catch onto, has picked up a solid following over the years, thanks to the group’s relentless enthusiasm and a few lucky breaks.

“In 2009 we were contacted by the Guinness storehouse in Dublin to open the St. Patrick’s Day Festival there. It was a fantastic honour, especially as we were the only Italian group involved.”

The five women have also adopted artsy, glittering half-masks for their performances. Recently, the addition of video has also amped up the band’s visibility.

English-born Giansante, who plays oboe and English horn, founded the band along with drummer and percussionist Valentia Lauti Neala. After an early turnover of band mates, things settled down when three other girls joined and stayed. Marizia Ricciardi Roisin plays violin, Maurizia Reali Erin plays piano and keyboard, and Cristina Patrizi Eirwen is the bass player.

“We found a bunch of mad girls ready to believe in our project and we have stuck together so now we are a great, happy family. We fight sometimes but that happens in the best of families, doesn’t it?”

Staying together is a challenge, Giansante admits, noting Erin is about to become a mother.

“Things change, life happens, and we know lots of bands that have broken up. But we have stayed together because we share the ambition to bring The Green Clouds to the top.”

The group appears frequently in Ireland, which is always a sort of home-coming for violinist Roisin who studied music at the University of Limerick for two years.

Giansante credits her father with giving the band its unusual name.

“We wanted something that suggested Ireland, and green is definitely the colour of the Emerald Isle. The idea of the clouds, on the other hand, is linked to the idea that music, like clouds, is changing constantly, creating unpredictable and different forms.”

Clouds are also, she adds, a feminine noun, reflecting the makeup of the group.

The band, now based in Rome, frequently plays festivals and big Celtic-Irish events, but they have a new project on the go called Green Clouds Wireless – a purely acoustic act geared toward smaller clubs and events.

“We’re also working on a big new project called The Quest. It is an out-Celtic project connected to a role-playing game our ‘mad scientist’ Francesco is bringing to life.”

The creative genius that she is referring to is Francesco Marchetti, the group’s composer and arranger.

“The band members focus on performances, and Francesco is the guy who is always thinking about our sound and style. We discuss every aspect of what we do with him, and then he works at it until he makes everyone happy.”

Giansante is delighted to be part of what she calls resurgence in Celtic music, adding there is a sense of peace and brotherhood at Celtic events. However, she worries some people apply too narrow a definition to the genre.

“Maybe too many people think Celtic music is synonymous with Loreena McKennitt or Enya, both of whom we love and adore. But it does not have to be slow and meditative; Celtic music can be upbeat, unique, ambitious, creative and colourful as well.”