The Ink on Celtic Ink 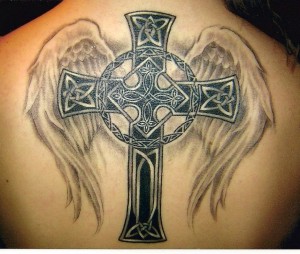 About one in five people now has a tattoo. Why? A 2007 survey from Media Matters, states that the average adult is exposed to between 600 and 625 advertisements every day. Only 272 of those are from traditional television, newspaper, magazine, and radio. That leaves over 300 non-traditional exposures to advertisements – that’s a huge number and it would be even higher if tattoos were factored in.

Okay, maybe tattoos are not yet trademarks like Pepsi or Nike, but they do advertise the values and characteristics of the person wearing the tattoo. I have seen tattoos of cartoon characters like Daffy Duck. I doubt this is a firm commitment to the corporatization of thought, but it does open the door to this question: does the bearer of the tattoo fully realize what she/he is saying?

Tattoos, after all, are permanent reflections of what a person has thought or felt. Jane Caplan, author of the seminal work on tattooing Written on the Body states that, “establishing a cultural identity is one common social role that the tattoo has played throughout history.”

So, in essence, tattoos are personal advertising. In the foreword to his book Tattoos – Philosophy for Everyone: I Ink, Therefore I Am, Rockey Rakovic states, “The people of our generation wanted to scream their identity on their skin and shout their opinions from the rooftops. When the craft of tattooing bettered itself through aesthetics, safety, and public relations, we went under the tattoo gun.”

Western society became familiar with tattoos following the travels of Captain Cook to Australia and Hawaii. The sailors on these voyages copied the idea of marking the body from the aborigines they encountered. The sailors used tattoos as memoirs of home, as marks telling others where they had been on their voyages and as talismans protecting them on their trip. For example, tattoos of a rooster on one foot and a pig on the other were believed to protect a sailor from drowning, according to Jean-Chris Miller’s The Body Art Book.

The aborigines were not the first or only people to embrace tattooing. Between the first and fourth centuries, the Picts of Caledonia (an area which is now considered part of Scotland) used to tattoo themselves with totem animals to reflect personal attributes. The tattoos were thought to help them in battle, as was their practice of dyeing their skin with woad to appear more menacing (think of Mel Gibson painted blue in Braveheart).

Today, individuals use tattoos to establish themselves as someone unique in the sea of others they encounter daily.

Carla Heggie is proud of her most recent tattoo – two beautifully entwined dragons. It’s the third knot she’s had tattooed in the past decade and she happily rolls up her shirtsleeve to display it.

“I like to live outside the box. The tattoos suit my personality,” says Heggie. All three of her tattoos are Celtic knots; the unending twists and symbolism of the circle of life appeal to her and say a lot about who she is.

Heggie embraced the opportunity. She had considered getting a tattoo before, but hesitated. Now the chance to reclaim her body as her own, using it to demonstrate her passion for her Celtic background, seemed right. Heggie lives in Halifax, in eastern Canada, but her mother is from Cheshire in North West England (bordering on Wales) and her father is Scottish. She identifies with both the Welsh and Scottish cultures.

She plans her fourth tattoo for after her next knee surgery. Plans for a fifth are not yet concrete, but “it definitely will happen”.  The Celtic knots are her way of marking herself and her place in the world. (In contrast, Heggie’s sister-in-law has not ventured into a tattoo parlour since the tattoos they got together.)

Heggie’s first tattoo was obtained in Ontario, but the latter two were drawn by Eldrick Murphy, a tattoo artist at Sin on Skin tattoo studio in Halifax.

Murphy estimates that up to 20 per cent of his work deals with Celtic emblems.

This is not surprising. Celtic symbolism is beautiful and meaningful.

Cornish writer Alan Kent comments that Celtic symbolism has remained appealing throughout the ages. In his contribution to the book Celtic Geographies: Old Cultures, New Times he states, “… Celtic is perceived as it has often been perceived in the past – that it is alternative, a cultural ‘Other’, a perception as prevalent now as when primarily English scholars first considered peoples from Celtic territories to be more primitive, more spiritual, more in tune with the Earth.”

People today want to advertise these values as being part of themselves.

It’s also interesting to note that the word “tattoo” may come from a Tahitian word “tatau”, meaning “to mask”. That makes me wonder – if individuals are using tattoos to advertise who they are to the world, what other part of themselves are they hiding away?