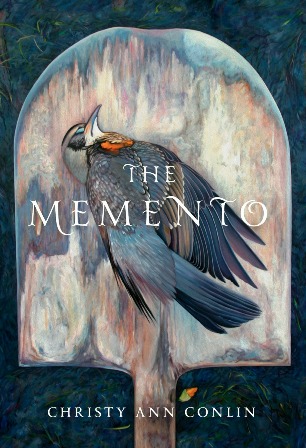 It was a long time between novels for Christy Ann Conlin, but her latest book, The Memento, was well worth the wait.

“It took me about twelve substantial drafts to weave together all the elements of The Memento,” shares Christy Ann Conlin via email from her home in Nova Scotia.

“I did a huge amount of research and every draft led to more research.”

After the popular and critical acclaim of her debut 2002 narrative, Heave, life got busy for the thirty-something author; teaching, editing, speaking, gardening, hosting a radio show, raising a young family, and caring for an ailing father – all the while honing her craft.

“I then took all I learned and poured it back into the last two drafts of The Memento.”

The resulting work is already receiving high praise, with one reader calling it “a grab bag of gothic delights – a creaking groaning mansion, a precocious 12th-born twelve-year-old, tea parties with the dead, and an unnerving number of fleeting darting ‘somethings’ only glimpsed in the corner of your eye.”

“There are some thrilling twists and turns, and unexpected moments in the novel,” explains Conlin, “all of which came together through a process of layering, so to speak. The Memento is a bit of a hybrid, a literary novel combining elements of a mystery and historical novel with gothic ghost story elements.”

Inspiration for the story came from close to home.

“Quite literally, it was a china tea set my mother told me was haunted. She believes that objects become endowed with the spirit of the person who owned them, mementos of a special sort. And I was also inspired by a childhood steeped in ghost stories told around summer beach fires and winter fireplaces. My mother used to take us for picnics in historic graveyards and we would do tombstone rubbings.

“My grandmother had very strong feelings about my mother and I being sensitive to spirits. To me, this means I am keenly aware of the stories people tell, and the ghosts and memories they carry with them. My grandmother loved to tell ghost stories. She was a curious blend of superstition and pragmatism and I think you need both to write a ghost story. You need to be open to the marvelous and unexplainable but you also need a dose of skepticism.”

A remarkable experience in Ireland also contributed to the new tome.

“In Drogheda, I was with some friends and we found a hole in the high stone wall of an enormous walled garden on an abandoned estate. That moment stayed with me and was the genesis of Petals’ End, the haunted garden in The Memento.”

Conlin’s passion for storytelling, she says, comes from her Celtic roots.

“Irish and Scottish ghost stories were a part of my childhood. I remember the story of The Curse of Mathair Nan Uisgeachan, which frightens me to this day! My mother’s family, the Grants, came from a line of Scots who left Scotland in the Clearances in the 1770s. The Clan Motto is Stand Fast and we were taught this as children for it hung on the wall with the Grant tartan and Grant Family crest. My grandmother loved the family pipe music, the Craigellachie. My ancestors settled in parts of Nova Scotia which to this day have a powerful Celtic tradition and culture.”

The paternal side of her family is Irish.

“My father’s grandparents emigrated from County Sligo in Ireland in the 1860s. My father used to read me the poetry of William Butler Yeats. The ghostly songs in The Memento are all traditional Irish ballads my father sang to me – the Connemara Cradle Song, She Moved Through the Fair and of course, Down by the Salley Gardens, Yeats’s famous poem put to a haunting melody.

The process of bringing the book to life, she notes, was not without its challenges.

“Holding all the threads of the plot and not letting them drop – it’s an experience like no other; holding an entire novel in one’s head, and weaving it together, in the midst of everyday life. I felt haunted by the book, and that if I didn’t finish it, then it would loom over me for the rest of my days.”

Crossing that finish line brought both euphoria and relief.

“Holding the book in my hands was almost surreal – so many years of work, literally in your hands. It was like being on a deserted island for years, and then suddenly being in the bustle again. And then as soon as my mind was free, my new book idea came pouring in like a flood tide!”

As with The Memento, Conlin will likely turn to both inspiration and perspiration for her next novel.

“There is an initial inspiration and then the work beings as the words are laid out on the page and the story unfolds and the draft writing begins. You have to do the day in, day out solitary writing and the inspiration stays alive, a lantern in the sometimes dark process of writing. A novel is a huge commitment of time and thought and absolute dedication. It’s no different than any other art form, from music to painting or dance. The final product, or performance, has years of training, practice and devotion behind it.

“E.B. White said, “A writer who waits for ideal conditions under which to work will die without putting a word on paper.” Writing The Memento taught me the truth of this. There will always be ups and downs, and you write your way through them. Writing a novel is about continuity and tenacity and discipline. You can have all the talent in the world but if you don’t sit down and write on a regular basis, your talent and original ideas don’t matter at all. Slow and steady is my motto now, and the turtle my mascot.”