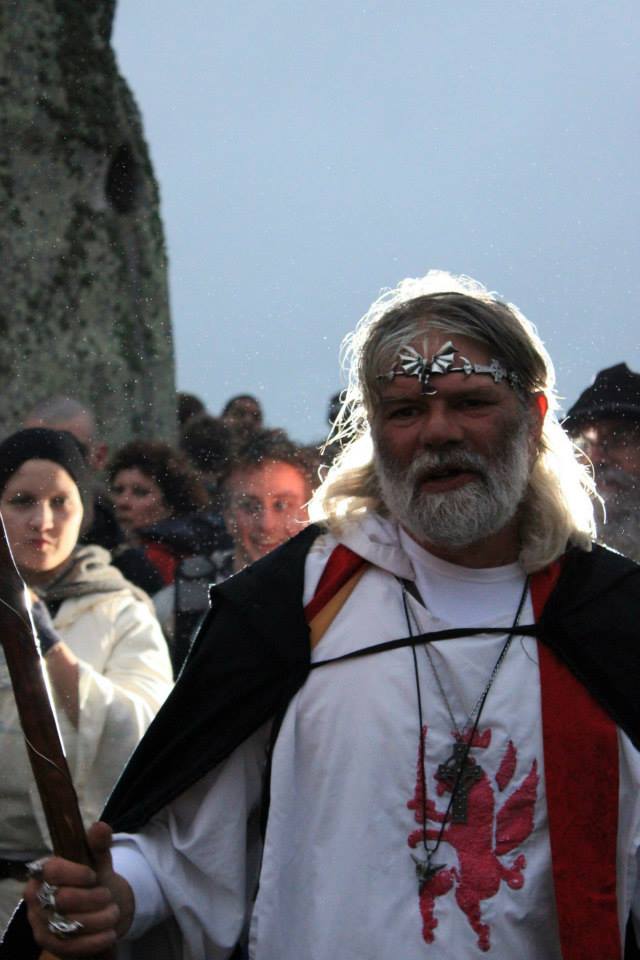 Historians may argue that King Arthur never really existed. However, that hasn’t stopped one man from claiming that he is the reincarnation of the legendary Celtic hero

In 1986, John Timothy Rothwell officially changed his name by deed poll to Arthur Uther Pendragon, and has lived ever since doing what he can to uphold the “ancient virtues of Truth, Honour and Justice” in Britain’s “hour of greatest need.”

As a druid leader, an eco-warrior and political activist, he has become famous as a modern King Arthur, and until a “bigger, badder and bolder” version comes along he has no intention of relinquishing the role.

A self-confessed “media tart,” Pendragon has been featured on many TV shows, has made the headlines of national newspapers, had a book published about him, and has been the subject of a documentary film. He once had his own column in the Esher News & Mail newspaper too. Not bad for someone who left school in his mid-teens with no qualifications!

As John Rothwell, he once had a steady job and was in charge of a construction company. However, he gave up his “normal” life – replete with a house, a car and a relationship – to ride off on his motorbike to live as King Arthur.

You are probably wondering how all this happened, and why anyone would make such dramatic changes in their life? Pendragon has explained that he once wrote all his nicknames on a plank of wood. He had been the leader of a motorbike gang at that time and had many aliases, including Bacardi, Geronimo and King John. A friend looked at all the names and said: “You’re not King John; you are King Arthur, the once and future king.” Now Arthur had had dreams in what he thinks were ancient Celtic languages and had always felt that he was different. That he could be the reincarnation of King Arthur made some sort of sense to him, but he wanted a sign to confirm it – something he received when he visited Stonehenge where a bird flew out of the stones right at him. He interpreted this as the sign he was seeking.

Soon after accepting that he was King Arthur, he founded the Druid Order known as the Loyal Arthurian Warband. Members are sworn to uphold the “Ancient Virtues of Truth, Honour and Justice,” with Knights taking an oath on Excalibur – the “Sword of Britain” (which originally came from an antiques dealer, but had been made for and used in the movie Excalibur) – and Ladies swearing on the scabbard. A number of celebrities, including punk-rock star John Lydon (a.k.a. Johnny Rotten), have been knighted by King Arthur. Heavy metal star Ozzy Osbourne and son Jack are also knights of the Arthurian Warband.

Many of Pendragon’s campaigns have been focused around Stonehenge. Back in the 1990s, he was arrested year after year for breaking the so-called “exclusion zone” at Summer Solstice, in which the authorities tried to prevent the public from going to the stone circle. Eventually the rules were changed and free public access at solstice was allowed. However, earlier this year new regulations were introduced, which have since resulted in a new protest by the druid leader. English Heritage, the organization that manages Stonehenge, has started a car-park charge, as well as an alcohol ban, and Pendragon has been very vocal in opposing both changes. He has often called Stonehenge a “Druid cathedral” and argues that charging to park vehicles is forcing pagans to “pay to pray.”

In recent years, Pendragon has been campaigning for the “bones of the ancient dead” to be returned to their resting places around Stonehenge. The bones were removed by archaeologists in 2008 with the assurance they would be returned after they had been studied. This was never done, however. Pendragon has no argument with scientists studying these human remains, but maintains they should be put back where they were originally laid to rest. He says it is a “matter of common decency,” and he has collected many petition signatures from the general public to support his belief. This is an example of how Pendragon sees himself as a king of the people who accept him, and whose views he represents. There is no one else doing a better job of being the Celtic chieftain returned, and for those who believe in him, he is indeed a King amongst men.