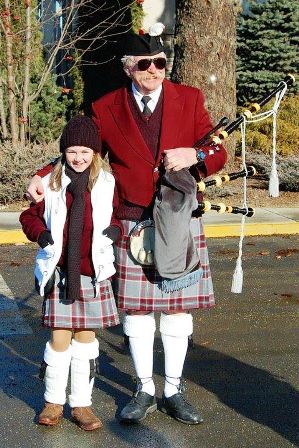 Just a few short years ago, Norm Crerar was a man with a burning inspiration. Today he is a man with a tattoo – the Okanagan Military Tattoo.

The RCMP Ceremonial Troop, the Royal Canadian Artillery Band, the band of the 15th Field Artillery Regiment, the Vancouver Naval Veterans Band, and the Delta and Winnipeg police pipe bands will all converge on the city of Vernon, British Columbia this July, for the annual Okanagan Military Tattoo.

“Most successful tattoos have military installations close by,” notes director and producer Norm Crerar, pointing out Vernon is home to the oldest cadet training centre in Canada, the first cadets having arrived there in 1912.

The tradition of a military tattoo dates back to 17th century Belgium, he continues.

“British drummers marched, summoning soldiers back to quarters and signaling to innkeepers “doe den tap toe’ meaning ‘turn off the tap, too.’ Shortened to ‘tap toe’ and eventually ‘tattoo,’ this ritual has evolved into international celebrations of music and entertainment.”

Crerar’s drive to produce the event can be traced back to a series of pivotal happenings, the first of which awakened his interest in Canadian history. Back in 1967, he was one of 100 young Canadian men to complete the 104-day Centennial Voyageur Canoe Pageant, paddling from Rocky Mountain House to Montreal.

“It left me with a deep respect for the early explorers, and a passion for the great country of Canada.”

Crerar’s interest was piqued again a decade ago when he heard of plans to re-enact Canadian explorer David Thompson’s 1808 voyageur canoe trip from Rocky Mountain House to Thunder Bay, Ontario. When a shorter trial-run event – paddling from Canal Flats to Trail, BC – was organized in 2007, Crerar added a mobile theatric component to tell Thompson’s story in performances along the way.

“Because there was no money to hire a piper, I decided to learn to play the bagpipes so I could play Amazing Grace at the end of each performance.”

Describing himself as having some Scottish ancestry but being more “Canadian Heinz 57,” he joined a local pipe band, the Kalamalka Highlanders. As a member of the band, he participated in a large musical tribute to BC veterans.

“Even after only two years, the OMT is now known throughout the Okanagan as a premiere entertainment event that appeals to a broad audience; everyone from toddlers to teens to grandparents. By including other ethnic groups in the performances, such as our local Ukrainian and Punjabi dance troupes, we attract a broader audience.”

This year’s Korean Military Traditional Band will be the tattoo’s first international guest.

“They are a really exotic act,” says Crerar, “with colourful drums, traditional horns, pipes, stringed instruments and dancers. The Calgary Stampede Band of Outriders, popular at the first tattoo, will be returning.

Aiming to give the audience a roller coaster of emotions, the tattoo will be heavy on traditional patriotism but will also feature drama and light-hearted comedy.

“The OMT helps keep our Celtic arts alive and in the public eye. The five pipe and drum bands in the region and our highland dancers, as well as other local arts and culture groups – including ethnic dance groups and choirs – all benefit from the opportunity to perform.”

The growth of the tattoo has created many new opportunities for Vernon and the Okanagan Valley, he believes.

“This is a beautiful area with lakes, wineries, golf course and endless recreational activities, so it is a popular destination for tourists. And Vernon is a vibrant centre for arts and culture. I see the opportunity to expand the OMT into a broader celebration, to branch out into pipe band competitions and to incorporate a gathering of the clans and Highland Games.”

Crerar hopes his future role with the tattoo will shift toward mentorship rather than production and direction, but he says the past years have been very rewarding.

“I always feel the same strong emotion of being part of something big and dramatic and meaningful to the community. I feel the vibration of the music as I stand on the floor with all the performers during Amazing Grace. How can you not shed a tear?”