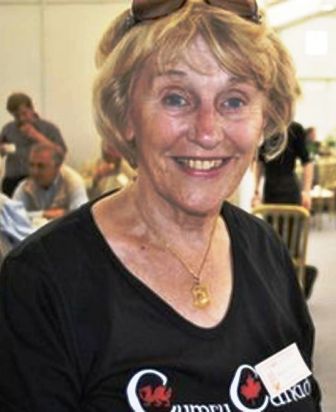 Hefina Phillips feels that Welsh customs often take a backseat to other cultures in the Celtic community.

“I just can’t understand it,” she shares over the phone from her home in Oakville, just outside of Toronto. “I just wish that more people knew about us as a nation.”

Originally from Swansea Valley in Wales, Phillips attended the annual Ontario Welsh Festival for many years before becoming involved behind the scenes in 2003. She says that a lot of effort goes on throughout the year to organize the events for the single spring weekend.

“All the hard work is worth it, though, if people are leaving with a smile on their faces.”

She is particularly passionate about the choirs that appear at the festival every year. Often, she has a group booked two years or more in advance. Fortunately, Phillips knows exactly what she is seeking in a guest choir.

This year, Côrdydd will be gracing the festival stage. The choir is a mixed voice group of about 5o from Cardiff. They have won the Choir of the Festival award at Wales’ National Eisteddfod four times – more than any other choral ensemble. In addition, the Three Welsh Tenors will be performing.

“We are very blessed this year,” notes Phillips. “It is going to be a big weekend.”

She adds that each year’s celebrations are memorable in its own way.

“They each have their own flavour, which is very difficult to explain. I come away, really, on a high every time.”

Most of those who attend the Ontario Welsh Festival are Welsh, or have Welsh spouses. Ontario has a strong Welsh community, with the cultural hubs being in Ottawa and Toronto.

“There really isn’t a day that I don’t speak Welsh to somebody. I’ve a list of things to do today and they’ll all be done in Welsh.”

Many Welsh-Canadians are spread out across different parts of the province, however, so the annual festival serves as a “family reunion” of sorts. For Phillips, it is extremely important to be able to speak her mother tongue on a regular basis.

“Those of us who speaks Welsh – we all know one another and will gravitate towards one another. But I can be speaking to someone in Welsh, then turn to you and speak in English.”

Fittingly, Phillips works as an instructor in the Celtic Studies program at St. Michael’s College at the University of Toronto. In February, she was in the midst of organizing a flash mob on campus.

“The students will march in wearing Welsh rugby shirts and carrying a flag – just to make people notice.”

The idea stemmed from her frustration about the lack of knowledge about Wales. She muses that there isn’t a person on the planet who doesn’t know about Ireland.

“But you could be walking down the street in Toronto, and I am sure that more than half the people you stopped to ask would have no idea where Wales is.”

Phillips’ work and commitment to the Welsh language and culture is one of the reasons she was the first recipient of the Ontario Welsh Festival’s Gold Award.

The honour began in 2011 to mark the festival’s 50th anniversary, and has continued ever since. This year’s recipient is Roy Morris, who has been involved with the Ottawa Welsh Society, who has conducted for the Ottawa Welsh Choral Society, the Gwalia Singers and other Welsh choirs.

“It’s an award given to people considered to have contributed the most to the Welsh culture, Welsh community, et cetera in Ontario,” says Phillips. “That’s really special.”

The festival as a whole is special, she continues, as each year means a gathering of old friends in addition to the meeting of new ones.