The Road to Waterford 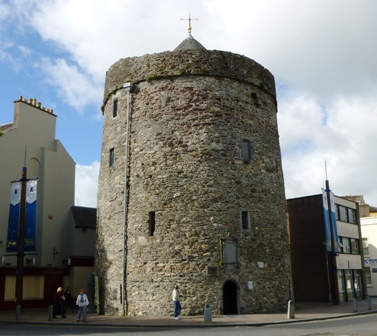 High atop the Granville Hotel in Waterford, along the trail of Ireland’s Ancient East, it is something to consider the history of this city’s many nooks and crannies.

The weather in Ireland in mid-January isn’t that off from other times of the year; aside from a seasonal dip in temperature (5 to 10 degrees Celsius most days), there is rain, mist and fog, with the occasional scattering of sunshine. Still, it is a welcome break from the snow and cold of Canada.

The small port town of Waterford (pop; 65,000) has seen its fair share of weather since first being settled by Vikings in 914 AD. And its citizens have weathered a myriad of change also.

As with its sister city Wexford to the north, Waterford was home to the Celts long before invaders set foot. A peaceful agriculture-based society, the Celtic people were welcoming hosts when the Viking tribes arrived, and the two communities quickly merged.

While evidence of that Celtic culture is minimal here – aside from the inherent language and music, there are almost no physical artifacts – the Vikings left behind substantial proof of their presence.

That presence is celebrated in Waterford’s Cultural and Heritage quarter – a collection of narrow streets, historic public spaces and dynamic attractions known as the Viking Triangle.

“The entire history of our city is contained within this area,” says Donnchadh O’Ceallachain, curator of the Waterford Museum of Treasures.

A quick walk from the museum in any direction attests to his claim; nearby, the 3-story, 12th century Reginald’s Tower houses an impressive display of Viking weapons and jewelry, along with an informative AV presentation of the building’s past and present.

“When Richard de Clare (a.k.a. Strongbow) led Anglo-Norman invaders into the city in 1170, the Celts and Vikings were all but wiped out,” explains O’Ceallachain. “What followed was centuries of English rule.

“Actually, Waterford did very well as a Crown subject,” he continues. “Its strategic location as a port brought financial prosperity, and protection of the area by the English military, ensured it’s allegiance to the Empire.”

That loyalty is on display at the city’s Medieval Museum, which hosts a huge collection of prized relics, including the amazing 4 meter-long Great Charter Roll dating from 1372, the stunning 15th century cloth-of-gold vestments, one of King Henry VIII’s hats, and the fantastic Chorister’s Hall, which sits directly beneath the museum.

“Really, the only time that Waterford’s motto – Urbs Intacta (untaken city) – was truly in question was immediately following the Protestant Reformation,” notes O’Ceallachain. “Civic leaders here chose to keep the city Catholic. Suffice to say that the reigning monarch, Elizabeth I, was not pleased.”

Despite the slight, and a brief go at independence from 1642-1649 that was quickly quashed by Oliver Cromwell, Waterford continued to prosper for the next 300 years.

The area’s architecture – including the beautiful Bishop’s Palace – bears witness to that economic growth. Built in 1743 by the renowned Anglo-Indian architect Richard Castle, the edifice’s open spaces house a dramatic collection of 18th century furniture, paintings, silverware and glassware, including the oldest piece of historic Waterford glass dating from the 1780’s. Also included is a lock of Napoleon’s hair and the only surviving mourning cross commissioned by the emperor’s mother to mark his death.

And though the city continues to enjoy a distinctive English feel about it (and it is of note that area citizens remained loyal to the Crown during the 1916 Easter Rising, even sending local residents to fight the rebels), Waterford is very much a product of its locale.

“As a key trading port, ships from all over the world called here,” shares O’Ceallachain. “And, as a result, today we are one of the most multi-cultural centers in Ireland.”

Sure enough, an array of ethnically diverse accents and restaurants bring a kaleidoscope of colours and flavours to Waterford. In addition, a number a major arts events, including film and music festivals, invite throngs of visitors from around the world each year.

“When you think about it, that tradition of all roads leading to Waterford still continues to this day,” says O’Ceallachain. “It really is something to consider.”