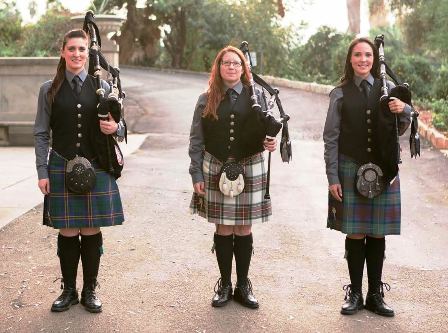 Once upon a time there were three lovely young ladies who embarked on a grand musical adventure.

The Scottish Rejects will tell you that audiences were a wee bit slow to embrace a trio of female pipers; women, they were told, do not play the pipes seriously. However, they will also note that they are now St. Patrick’s Day favourites where they live in southern California, and that they play on the acclaimed Outlander television series.

Band manager and piper Tress Maksimuk grew up in a family of seven, five of them boys.

“I had to be tough – rarely would they let me just be a girl,” she recalls. “When my younger brother challenged me by saying I could never play the pipes, I naturally had to prove him wrong. His was the extra push I needed.”

Maksimuk never looked back, and she has been playing for the last 14 years. Her current bandmates – Valerie Byrnes and Lela Perriello – began 15 and 9 years ago, respectively. For each of them, there was a moment when the pipes kindled an irresistible longing deep within.

Maksimuk was in a dance rehearsal when she heard pipes in the distance.

“It was as if the sound went straight to my heart. It was the moment I knew I had to do this. I call that moment magical.”

Byrnes first heard the ancient instrument when she was a 10 year-old in elementary school, pledging then and there that she would one day join the high school pipe band.

“Something stirred inside me and I couldn’t shake it off,” she shares. “There are times when this instrument really speaks to me.”

Perriello, who – unlike her California born and bred bandmates – hails from northern Michigan, studied the clarinet before taking up the pipes. She was in graduate school in Scotland when she first heard the drones at a memorial ceremony for Scottish hero William Wallace.

“A lone piper was playing at the base of the monument,” she remembers. “The setting and the sound were so magical I knew immediately that I wanted to learn how to play.”

The girls formed the band eight years-ago, while Perriello was taking lessons from Maksimuk, who was already playing with Byrnes.

“We loved the idea of having three lady pipers in one small group,” explains Byrnes, “especially since we all seem to have an affinity for doing unconventional things. Our official debut was St. Paddy’s Day in 2008.”

The trio prides itself on having sounds and styles for any occasion.

“Dress-wise, we like to mix it up,” says Maksimuk. “If it is a party or non-conventional type event we’d rather wear tartan corsets or mini-kilts. Musically, we like to ramp up the energy with more modern tunes written by pipers. Jigs and reels are great fun, old and new. Mixing that with something like rock music is always interesting and amazing.”

Maksimuk grew up heavily influenced by the harmonies and melodies of Irish singer/songwriter Enya.

“Now that we are writing our own compositions, I find myself creating tunes that are traditional, but then adding my own harmony to create a deeper emotion to the sound.” 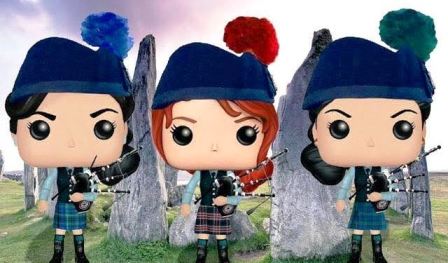 All three embraced a traditional style of play before they branched out.

“I strive to get a great sound and specific movements or embellishments in a traditional way because I think it is part of the unique aspect of pipe music,” says Perriello. “But there are times when adding a bit if flare really spices things up.”

San Diego’s Comic Con and the Outlander series have given the group great exposure, but they also list playing at the funerals of family and friends as being among their most memorable moments.

Maksimuk muses that the Scottish Rejects continues to be touched by the music of their forbearers.

“At times when I play I feel a connection to my ancestors that brings me a sense of peace and wholeness.”

It is all about the friendships the trio have formed, the supportive fans, the road trips and the good memories, adds Byrnes.

“The emotions the pipes can stir are quite impressive and I am glad I can bring that to people,” agrees Perriello.