The Stuarts: Dynasty in Exile 2 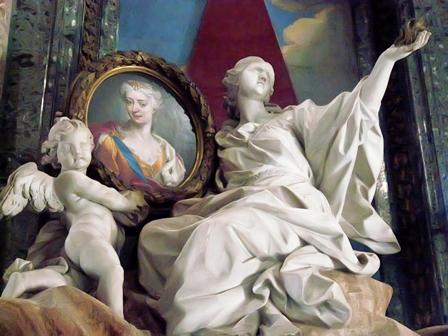 Even the defeat of Culloden did not diminish the brilliance of the Prince in Rome. When he returned he was treated like a hero. The rags he’d worn during the campaign, tattered, rotting and filled with vermin, were collected by aristocratic women of the city and treasured as precious mementos, despite the contagions they contained. The tragic figure of the Prince was more handsome than ever to the Roman ladies, and they were said to be fighting over him “like fish-wives.” At his first visit to the opera he was given a standing ovation upon entering.

When King James died on January 1, 1766, Charles was not at Rome, having wandered the length and breadth of the European continent seeking ways of launching another invasion. He returned to Rome only after his father died.

The funeral for King James was held at St. Peter’s Basilica – an extravagant pageant even by Roman standards. The procession contained more than a thousand dignitaries, including twenty cardinals, with the king’s funereal bed surrounded by the seminarians of the Scots, Irish and English colleges. He held a sceptre in hand and the arms of Great Britain were outlined in gold and jewels on his breast. He wore a crown on his head, a crown he was never to wear in life. Above the funereal bed was inscribed “Jacobus Magnae Britannica Rex Anna MDCCLXVI.” The sermon was given by the Pope.

James had requested to be buried in the church of Santi Apostoli where the heart of his wife had been placed in an urn. It was Pope Clement XIII who insisted that he be buried in St. Peter’s Basilica.

Charles was not present for the funeral, arriving three weeks later, demanding to be acknowledged as King. The cagey Pope allowed his cardinals to decide the issue – and they decided against Charles.

While Charles floated around Europe, Prince Henry’s career thrived in Rome. As Cardinal Duke of York, he was given the bishopric of Frascati, just outside the city, and was also appointed Prefect of St Peter’s Basilica, a highly honoured position in the Church which he would hold for the next 57 years. During this illustrious career, also characterized by plotting and scheming, he was only ousted from Rome by the power of Napoleon’s armies which subsequently stripped him (and the Church) of virtually every possession. Henry fled to Naples, then to Venice.

After Nelson defeated Napoleon at the Battle of the Nile, Henry returned to live in Frascati, where his memory is cherished to this day; even more than two hundred years after his death he is considered by residents of Frascati to be “our bishop”, having done much for the community by distributing free medicines, building social infrastructures, and patronizing the arts. When Charles died, Henry claimed the title of King, calling himself Henry IX.

As for Charles, he hit the “nasty bottle” in later life, had difficult relationships with women, but was eventually reconciled to the Church. He took a stroke in 1788, lingered for several weeks, and died on January 31 at the Roman palace in which he’d been born, Palazzo Muti. He was initially buried in Frascati, but when Henry died in 1807 he was buried in St. Peter’s Basilica next to his father. In 1939 the remains of all three Stuart Kings were given definitive burial in a new travertine sarcophagus in the Basilica’s crypt.

Rome still abounds with the touch of the Stuarts. The Venerable English College has two portraits of Henry, Cardinal Duke of York, and a chapel in the church of Santa Maria in Trastevere bears his royal arms. In St. Peter’s Basilica there is a memorial to Clementina, the matriarch of the Stuart’s Roman household, whose sanctity so impressed the Pope that she is today one of only two women to be honoured in the Basilica (there was even talk of her canonization in the years after her death.)

To this day, prayers are said in the church of Santa Maria in Campitelli, as ordered by Henry Stuart, for the conversion of England. The Protestant cemetery, built at James’ instigation near the Pyramid of Cestius, continues as an attraction in Rome and still functions as a burial ground. It contains the graves of poets John Keats and Percy Bysshe Shelley.

Finally, in St Peter’s there is the exquisite memorial to the Stuarts by Antonio Canova, in luminescent white marble. According to a report in The Venerabile, the journal of the Venerable English College in Rome, the monument was erected by Pope Pius VII “assisted by a contribution of fifty guineas from George IV.” Whether this was a symbolic trifle from a well-entrenched monarch who had nothing more to fear from the Stuarts or a sincere act of generosity, no one could say without speculating. It can be noted, however, that the sarcophagus of the Stuarts in the Basilica’s crypt was restored in 1939 by Queen Elizabeth, the Queen Mother.

The monument of the Stuarts by Canova, about a story high, has rampant lions carved in marble at the top and, in the middle, profile busts of the three kings. Below are two angels, praying and weeping with tangible pathos at a set of doors which, also carved in white marble, are symbolically closed forever.