The Stuarts: Dynasty in Exile 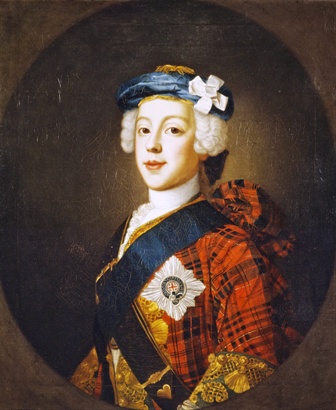 Near the entrance to St Peter’s Basilica in Rome, a Canova sculpture commemorates the last of the Stuart dynasty.

It is difficult to say how many of the 20,000 daily visitors to the Basilica actually notice it among so many other masterpieces. At five million cubic meters – almost five times the size of its closest rival – it is easy to be distracted upon entering the largest church in the world.

Also just inside the entrance of St. Peter’s are masterpieces by Raphael and Giotto, and the world’s most famous religious sculpture, Michelangelo’s La Pietà. The tomb of Pope St. John Paul II is within a few feet, and Bernini’s vibrant golden stained-glass window of the Holy Spirit shimmers brilliantly from the distance of the high altar 700 feet away, atop the bronzed Chair of St Peter. Here is a place of superlatives: the world’s largest church, the world’s most famous sculpture, the capital of the world’s largest religion, the sleeping place of popes, emperors and kings, and a veritable reliquary of sacred objects including, among other things, the bones of St. Peter himself.

And yet, amazingly, within this holy place is a monument to the last of the Stuart Kings, James VIII of Scotland, and his sons, Bonnie Prince Charlie and the Cardinal Duke of York.

James Stuart, the “Old Pretender” came to Rome as an exile in 1719. Under the patronage of the Pope, who recognized him as the legitimate king of Britain, he set up his Royal Court in one of the Pope’s palaces next to the church of Santi Apostoli. His court would be marked by political intrigue, English spies, religious bigotry, family quarrels, acid tongues, the “nasty” bottle, and the general misfortune that seemed to follow the Stuarts wherever they went; but it also included nearly unsurpassed culture in art, music and painting, a progressive experiment in religious tolerance, social consciousness marked by generosity towards the poor, and hope for redemption and reconciliation. The Scottish temperament, such as it is, took Rome by storm in the 18th century.

The Stuart palace still stands tall as the Palazzo Muti, also known as the Palazzo del Re (today the Palazzo Balestra). Here the Bonnie Prince was born on 31 December, 1720. Charles Edward Stuart was robust and healthy, and would be followed by a brother, Henry, five years later.

The birth of the Bonnie Prince sent Rome into a carnival. The wine flowed, parties broke out across the city, fireworks were let off, and congratulations came from cardinal-princes of the Church, Roman nobility and sovereign monarchs from across Catholic Europe. The Pope himself sent a large gift of money.

The Bonnie Prince was baptized Charles Edward Louis Philip John Casimir Sylvester Maria. While King James struggled to form alliances and to launch a military campaign to recapture his three crowns, the young lad had Rome as a playground in which to grow up.

From their palace in the centre of old Rome, not far from the Spanish Steps and the Trevi Fountain, the Stuarts avidly attended the opera, concerts and social events of high distinction. In fact, the Stuarts were such generous patrons that they were given three boxes at the opera when most monarchs were only given one, symbolic of The reason for their title to the three great kingdoms of Scotland, England and Ireland.

The Bonnie Prince, even at the age of 4, was borne aloft a dais and carried through the streets of Rome to such events. Already gifted with a military instinct, the Prince is said to have shot curious onlookers with his toy cross bow as he was carried through the crowds.

As a boy, he was strong-willed and independent. Once, in an audience with Pope Benedict XIII, James and his wife ceremoniously kissed the feet of the pontiff, but under no circumstances could the young Prince be induced to do the same. He obstinately refused to succumb, by reward or threat. Under normal circumstances this would have been seen as the insignificant pouting of an intransigent child – but there were Protestants in the Stuart Court. Some observers wondered whether the Protestants were exerting too much influence on the young Prince, an issue that eventually caused a separation between James, who wished his son to have Protestants in his retinue so as to learn tolerance towards them as their future ruler, and Charles’ mother Clementina, who saw them as utterly Godless.

By the time Clementina left, in large part because of the growing influence of Protestants in her Royal Court, James had already used up his political capital. Cardinals, bishops, kings and queens from across Europe took sides. James was alone. Compromises were made, staff was changed and the couple was reconciled.

Despite the conflict at home, the Scottish Princes showed no worse for wear.

As a teenager Prince Charles took flight as a prodigious musician and dancer. In fact, he impressed virtually everyone he met throughout Italy, either on social tours or in military engagements; at the age of 14, in a military engagement with the Spanish to capture the kingdom of Naples, he showed fearless skill “even when balls were hissing about his ears.” When Naples was taken, the Prince was found serving in the trenches alongside common soldiers who were said to have adored him, finding his conversation “really bewitching.”

After the battle, while at sea, a story is told that his hat blew off his head and fell away from the ship into the sea. As arrangements were being made to lower a boat to find it, the Prince told them not to bother because he would soon be fetching a better one in England – meaning his Crown.

His enemies abroad were watching these developments with interest. They were justly worried when he stepped ashore Scotland and began gathering an army to take the Crown usurped by the German succession. History records well how that enterprise ended.