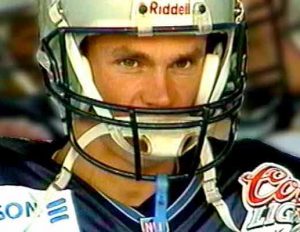 Scott Couper never thought about making history. He just wanted to play the game he loved.

That game was American football, and Couper played it well enough to become the first Scotland-born “skill-position” player (quarterback, running back or wide receiver) to appear in a modern National Football League (NFL) game when he suited up for the Chicago Bears against the Pittsburgh Steelers in a pre-season exhibition game at Croke Park in Dublin in 1997. A wide receiver, he took the field for three plays.

“On my third play, third down, the quarterback threw a pass to me and I didn’t make the catch, and I’ll go to my deathbed regretting that,” said the life-long Glaswegian, “But playing in that game was a great experience. I relished the 10 days I had with the Bears in training camp. I was just happy I got a chance to sign an NFL contract, put on an NFL jersey for a while. It is one of the best memories of my life.”

The U.S.-based NFL is, of course, where the sport of American football is played at the highest level, and while its popularity pales in comparison to that of football (or soccer), rugby or Gaelic football in Celtic countries, it has long had a cult following in that part of the world. In fact, youth programmes thrive throughout Ireland, Scotland and Wales, in spite of a lack of support from the NFL, organizers say.

“In the mid-1980s in the UK, we only had four television channels, and at the time there was a younger channel called Channel Four,” Couper recalled. “And on Sunday nights, they would put on highlights of American football, and it became sort of a craze in the U.K. I was 14 and wasn’t playing any kind of organized sport at the time, so I decided I wanted to try playing it. The sport was so vivid on TV; it really just captured my imagination.”

Couper, who came to idolize former Seattle Seahawks wide receiver Steve Largent, signed on with the now-defunct Glasgow Lions youth program in 1984 (many of the coaches and even some of his teammates were former American college players). He continued to play through university before he signed a professional contract with the Scottish Claymores of the World League of American Football (also known as NFL Europe) in 1995. He stayed with the Claymores until the team folded in 2004, but his cameo in the American Bowl marked his only actual NFL appearance.

Couper’s name may be in the record books, but he is not the first Scot to play in the NFL. According to Pro-Football-Reference.com, an online database of NFL history, that distinction belongs to Fort William native Chick Lang, who appeared at tackle for two games with the old Duluth (Minnesota) Eskimos in 1927. Lang was soon followed by Glaswegian Arthur Matsu, the son of a Japanese father and Scottish mother who played six games for the Dayton Triangles in 1928. It would be nearly 50 years before another Scot, kicker Ian Sunter of Dundee, began his two-year career in the league in 1976. 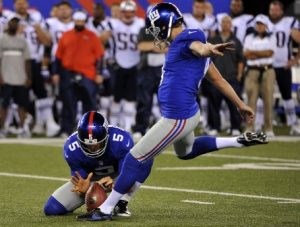 In all, Pro-Football-Reference.com reports that seven Scots have played in an NFL regular-season game, and two of them—Lawrence Tynes, of the Tampa Bay Buccaneers, and Graham Gano, of the Carolina Panthers, both placekickers—are still active. In 2008, the Greenock-born Tynes, who moved to the States when he was 10, became the first Scot to win the NFL’s championship when he won the Super Bowl as a member of the New York Giants; he won another championship as a Giant in 2012 before moving to the Bucs as a free agent in the summer.

Gano’s background is similar to that of Tynes. He was born in Dundee, to a Scottish mother and an American father stationed there with the U.S. navy, and lived in Arbroath in his early years before moving to the U.S., when he was nine. He grew up playing soccer in Scotland—and even dreamed of suiting up for the country’s national team—before deciding to focus on American football as a senior in high school. He joined the Panthers in 2009.

“My Scottish roots are very important to me,” said Gano, a married father of two, adding that he often communicates with the NFL fans in Scotland via Twitter. “It’s an honour to be one of the few Scots to play in the league.”

At present, Scotland is the only Celtic nation represented in the NFL ranks. Again according to Pro-Football-Reference.com, Wales has had two players appear in the league—Blockwood-born kicker Allan Watson, who played four games for the Pittsburgh Steelers in 1970, and Jon Norris, who played three games for the Bears as a defensive lineman in 1987.

There are 10 Ireland-born players with NFL experience, with most having played in its early years in the 1920s (County Mayo’s Birdie Maher was the first). Dubliners Adrian Young, a linebacker, and Neil O’Donoghue, a kicker, each had fairly long careers as professionals, with Young suiting up with the Bears and the Philadelphia Eagles over a five-year career, from 1968-73, and O’Donoghue wearing the colours of the Buffalo Bills, Buccaneers and then St. Louis Cardinals, from 1977-1985. Kilkenny native and placekicker Duncan O’Mahony had a seven-year career in the Canadian Football League (CFL), which fields a modified version of the American game, from 2001-2008.

Young Irishman Patrick Murray, also a placekicker, hopes to follow the lead of O’Donoghue and his countrymen. Though born in the U.S., Murray holds dual citizenship through his parents, who emigrated from County Monaghan in the 1980s. His father was a Gaelic football player for his county team, and Patrick grew up playing Gaelic football in the New York area before deciding to focus on the American game while at Fordham University. At press time, he was hoping to earn a tryout with an NFL team.

“Gaelic football was the number one sport in my house, so it was tough for me to give it up,” Murray said, “but my father and I agreed that I had to in order to make my dream of playing the NFL a reality.

“My father really took to the game after watching [the film] Rudy,” he continued, referring to the film about a football player at the University of Notre Dame. “I credit him with teaching me everything I know about kicking technique, and a lot of my approach is based on what I learned playing Gaelic football and watching him play. He’s 52 years old now, and he can still kick an American football 50 yards. I don’t trust anybody to coach me but him.” 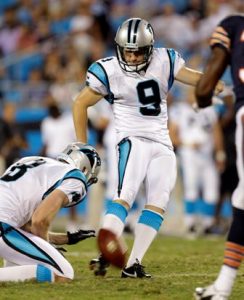 Although the number of Celts currently playing American football professionally in North America is relatively small, those who know the game expect that to change. Gano said he and Tynes have discussed travelling to Scotland to work with young players at some point, and Murray said he would like to do the same in Ireland. Couper is already giving back to the game he loves by working with the Glasgow Tigers American football club, a team of adult amateurs who play in the U.K.’s National Leagues of American Football. He also works with youth programmes in the Glasgow area.

“When [NFL Europe disbanded], the development money went away, and the game over here took a step back,” said Couper, who works for a medical imaging company and lives with his wife and three sons in the Glasgow area. “Local teams are developing talent now, and there are people doing a lot more volunteering and working with young players than I am at the minute, and the sport is thriving in the U.K. because of them. Thanks to them, there are doors open now for players who have talent from over here, and with the NFL holding games at Wembley every year, the sport is getting a lot of attention. I think we’ll see a lot more players from this part of the world reaching the highest levels of the sport as a result.”

In Couper and the other Celts who have played the game, they certainly have plenty of role models.