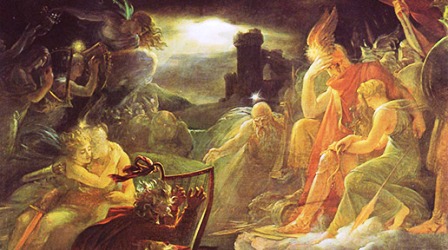 Stories of the Danann were passed down through the ages into legend via the ancient oral tradition of the poets. Later, Christian monks began assembling and recording them in an effort to produce a history for Ireland. Inevitably, these texts were influenced by their beliefs and doctrines, their translation skills (or lack of), and the desire to please their patrons. What we are left with is impossible to distil into fact and fiction.

Who were the Tuatha de Danann?

Tuatha de Danann (pronounced Thoo-a day Du-non) is translated as ‘tribe of Danu.’ Scholars are agreed that Danu was the name of their goddess, most probably Anu/Anann. However, that is unproven, and I believe could equally have referred to their leader or king, or even the place from which they originated. They were a race of God-like people gifted with supernatural powers, who invaded and ruled Ireland over four thousand years ago. According to an ancient document known as the Annals of the Four Masters (Annála na gCeithre Maístrí compiled by Franciscan monks between 1632-1636 from earlier texts), the Danann ruled from 1897 BC until 1700 BC, a short period indeed in which to have accumulated such fame. They were said to have originated from four mythical Northern cities Murias, Gorias, Falias and Finias, possibly located in Lochlann (Norway). The Book of Invasions (Lebor Gebála Érénn compiled c.1150) claims in a poem that they came to Ireland riding in “flying ships” surrounded by “dark clouds.” They landed on Sliabh an Iarainn (the Iron Mountain) in Co. Leitrim, where they “brought a darkness over the sun lasting three days.” There is a lovely line which illustrates perfectly the bewilderment felt towards these conquerors;

“The truth is not known, beneath the sky of stars,
Whether they were of heaven or earth.”

A later version of the story relegates the flying ships to mere sailing ships. The dark clouds became towering columns of smoke as the ships were set alight, a warning to observers that the Danann were here to stay. Clearly, the monks recording this story were trying to make sense of something which was well out of their comfort zone. And so we have our first dilemma; which story to believe. Did they arrive from the skies, or from across the sea?

They certainly looked very different to the small, dark native peoples of Ireland at that time. The Danann are generally described as tall with red or blonde hair, blue or green eyes, and pale skin. Interestingly, archaeology has unearthed evidence all around the world of small colonies of red-haired people from the same time period as the Tuatha De Danann’s arrival in Ireland. Excavations in Xinjiang Province, China have revealed mummies of red and blonde haired people living around four thousand years ago. The extremely well preserved Egyptian mummy of nobleman Yoya, c. 1400 BC, shows he had blonde hair and Nordic features, as did his wife, Thuya. She was also Tutankhamun’s great-grandmother.

In order to win supremacy over Ireland, the Danann fought against the existing ruling tribe, the Fir Bolg, in the First Battle of Moytura. During this encounter, the Danann High King Nuada Argetlam (pronounced Noo-tha Or-geth-lam) lost his arm. He survived, but lost his position, as a king could not be seen as anything less than ‘whole’ if he was to bring his people continued success. In an intriguing turn of events, the physician Dian-Cecht replaced the lost limb with a fully functional ‘arm of silver’. Later, Dian-Cecht’s son, Miach, also a physician, caused skin and flesh to grow over the metal arm. Thus ‘whole’ again, the kingship was restored to Nuada following the ousting of his replacement, the tyrant Bres. So here we have another case of strange, advanced (dare we say ‘alien’?) technology. Could this be the first-ever prosthesis, a robotic arm built over four thousand years ago?

The Four Treasures of Eirean

The Danann brought special equipment with them, four magical talismans of great power. These were:

The Sword of Light – also known in Irish as Claiomh Solais (pronounced Clee-uv Shull-ish). It was said to have been made by Uiscias in the northern city of Findias, and brought to Ireland by Nuada, and that no-one ever escaped from it once it was drawn against them. It is also described as a ‘glowing white torch.’ The similarities to the imaginary light sabre are quite striking; could this sword have been some kind of futuristic laser weaponry?

Lugh’s Spear – also known as ‘the finest/famous yew of the wood,’ said to have been made by Esras in the northern city of Gorias. Lugh used it to kill his Formorian grandfather, the giant-king Balor at the Second Battle of Moytura (although some versions of the story claim he used a sling). It has been suggested that Lugh’s spear, the spear Crimall which blinded Cormac mac Airt rendering him unfit (not ‘whole’) for rule, and the Lúin Celtchair are one and the same weapon, although there is no concrete evidence to back this up. The Lúin Celtchair is a fascinating legend. It was a long, fiery lance from which ‘sparks as big as eggs flew’ when ‘the spear-heat takes hold of it’. In order to prevent the flames of the tip from consuming the shaft and the warrior holding it, the spear head was dipped into a cauldron of mysterious sorcerous liquid. In ‘The Destruction of Dá Derga’s Hostel’, a saga of the Ulster cycle of mythology, the Lúin Celtchair is claimed to have been discovered at the Battle of Moytura, the same battle where Lugh killed Balor. This spear, then, could well be Lugh’s, and seems to possess many of the qualities of the Sword of Light.

The Dagda’s Cauldron – Also known as the ‘Cauldron of Plenty’ (Coire Ansic in Irish, pronounced Kwee-ra On-sik). It was made by Semias of the northern city of Murias. Not much is known about this vessel, although it was thought to have had the power to bring the dead back to life, and that “none would go from it unsatisfied.” Dr. Ulf Erlingsson has suggested that the giant stone basin found in the eastern passage of the central mound at Knowth, part of the Newgrange complex, could be the Dagda’s Cauldron, and that the concentric circular design depicted on it could be a map of Atlantis, as described by Plato. How could the Danann have come by this knowledge?

The Lia Fáil – Also known as the Stone of Destiny, and the Coronation Stone. It was made by Morfessa of Falias, and brought into Ireland by the Danann, where they duly placed it at the Hill of Tara, in Co. Meath. Legend has it that its cry confirmed the coronation of the rightful High King of Ireland, and that its roar could be heard throughout the land. It was broken in half sometime later by Cuchullain when it failed to proclaim him or his protégé. One half was carried away to Scotland, where it eventually ended up in the throne of the British monarchy, although there is a whisper that the true stone was hidden, possibly beneath the River Tay, and remains there to this day. A stone with a voice sounds too fanciful to be true, but perhaps it was misunderstood; perhaps the stone was no more than a stage upon which the new king stood, his voice amplified by some sort of early (or alien?) microphone.

Immortality and the Other-world

More famously known as Tir na Nog, or The Land of the Ever Young, this was thought of as the original home of the Danann. It could be reached through water, by traveling west over the sea, or passing through the gateways of the Sidhe mounds. In these places, the veil between the worlds was considered very thin, and therefore more easily traversable. Perhaps the most interesting aspect of the magical realm is not the eternal youth, beauty, joy and plenty it represents, but the passage of time attributed to it. In Tir na Nog, time seems to stands still, while in the mortal world it passes in the blink of an eye. The story of Oisin, Fionn mac Cumhall’s son, and his other-world lover, Niamh, illustrates this perfectly. After only three blissful years in the magical realm, Oisin returns home to find three hundred years have passed. When he falls from his horse and his feet touch Ireland’s soil, age catches up with him, and he dies an old man. This idea of infinite paradise where no one grows old and time has no meaning has parallels with space travel, alternate dimensions, and even the mundane, such as advancements in health care and medicine. Were the Danann immortal? Not in the absolute sense of living forever; they could be killed in battle, or by sickness, although compared with the natives at that time, they were clearly long-lived. Even modern man would seem ageless and long-lived in comparison with our early ancestors.

The Danann and the Sidhe

The Danann were defeated in two battles by the Milesians, whom historians and scholars alike agree were probably the first Gaels in Ireland. Not only were the Danann defeated by military might, but by cunning too. It was agreed that the new invaders and the Danann would each rule half of Ireland, and so it was that Amergin of the Milesians chose that half of Ireland which lay above ground, leaving the Danann to retreat below. They were led away to their new domain via the Sidhe mounds by Manannán, God of the sea, who then shielded them from mortal eyes by raising an enchanted mist known as the Faeth Fiadha (pronounced Feh Fee-oh-a), or ‘Cloak of Concealment’. As time passed, they became known as the Sidhe (Shee), Ireland’s fairy-folk.

To one who observes without understanding, even an airplane flying through the sky carrying people in its belly to far distant, unimaginable lands seems like powerful magic; so does flicking a light switch, a television screen, a mobile phone. The plane becomes a ship, transported on dark clouds; a television screen becomes a vision, the phone a stone which speaks, perhaps an oracle giving advice direct from the Gods. Those who manipulate such magic must surely be Gods themselves; they look like Gods with their height, their red-gold hair and sky-blue eyes; they wield fiery, powerful weapons; they appear to be ageless and immortal, and they are wise, beautiful, and fearsome. Danann ‘magic’ can be explained, though not proven, as technology misunderstood by the local population. Whether it was man-made or alien made, is debatable. It is certainly possible that these were migrating people from advanced civilizations in our world, perhaps displaced by the Great Flood, searching out new homes, bringing with them what remained of their knowledge and technology. I also believe that ‘we are not alone’ in this great cosmos, and that visits from other worlds and dimensions cannot be ruled out. Or perhaps it was magic after all, a force which, having no comprehension of, we seek to deny. Experts, being of scientific and analytic mind, will insist the lack of physical evidence proves the Tuatha de Danann never existed. The fact so many stories about them remain, however, is evidence enough to me that they did. The aura of mystique that surrounds these elusive people is, for me, the greatest part of their allure.