The World of Nicola Benedetti 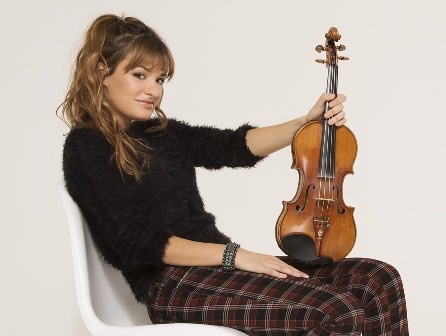 “I really must get something to eat.”

Scottish violinist Nicola Benedetti is on the phone from New York City, where she is busy making the media rounds in support of her latest recording, Homecoming – A Scottish Fantasy. The lovely, twenty-something ‘Scotalian’ has just flown in from Pittsburgh, where she appeared with the city’s renowned Symphony just the night before. And though she is happy to have her feet on the ground, she hasn’t stopped long enough to enjoy a proper meal.

“It is one of the many perils of performing on the road,” she says, “irregular meals and diet. As much as I try to keep my eating routine, I never get used to touring that way. And there is nothing I enjoy more than sitting down to a solid meal. You might never guess, as I am fairly petite, but actually, truth be told, I adore good food.”

As for travelling itself, Benedetti has mixed feelings.

“It is the getting to and from the airports, the checking in, the going through security, the jetlag, etc – that’s the part most of us grow weary of,” she explains. “Once I arrive I am fine, and I cherish the opportunity to get out and explore a city like New York or Paris or London. I love the energy of these places, and the chance to experience and absorb new cultures.”

The challenge, she acknowledges, is finding the time to go sightseeing.

“Usually it is a bit of a whirlwind wherever I go; there are always meetings with the media or the people from the record company, and there are likely a number of social events and appearances planned for me also. And then there are the rehearsals and concerts themselves, which take up most of my days. And somehow, through all that, I still have to find the time to practice, eat, call my family and boyfriend, and try to have some semblance of a normal life.”

Not that Benedetti is one to complain.

“Good Lord, no,” she laughs. “I am certainly the last one you would call a Diva – my mother and father simply would not stand for it. I know my roots, I know where I am from, and I am grateful every day to enjoy the good fortune that I do. I make sure to count my blessings each night before bed.”

Born in West Kilbride, North Ayrshire to an Italian father and a Scottish mother, Benedetti is the epitome of a child prodigy; she began playing the violin at the age of four, and by eight was leading the National Children’s Orchestra of Great Britain. At ten she was admitted to the prestigious Yehudi Menuhin School for young musicians. By the age of 14, she had performed with the Royal Scottish National Orchestra, the Scottish Opera, the Scottish Chamber Orchestra, the City of London Sinfonia, as well as the Royal Philharmonic Orchestra. Two years later she was named the BBC Young Musician of the Year, and soon after signed a lucrative recording contract with Deutsche Grammophon/Universal Music Group.

In 2005, Benedetti released her first full-length solo recording – Karol Szymanowski’s Violin Concerto No. 1. Since then, she has proven prolific, producing eight more CDs in just nine years, including Homecoming – A Scottish Fantasy.

“It was a recording that I had been thinking of making for a long time,” she shares, “and it is one that I felt I had to make. The timing seemed right for me, and I knew where I wanted to go with it, so it was just a matter of bringing all of the pieces together and making it happen.”

Including works by the likes of Max Bruch, Phil Cunningham, James Scott Skinner and others, Homecoming is an homage to her homeland.

“Growing up in Scotland, and being passionate about music from such a young age, it was almost impossible not to be influenced by our traditional culture,” she notes. “It was everywhere, and it was a part of the daily soundtrack of my life. And even though I studied classical music exclusively, I have no doubt that those influences have seeped into my style and sound.”

Benedetti believes that her perspective on Scotland has changed as she has matured.

“There was a time, as a young girl, when I had very little appreciation or understanding of where I came from or the importance of having a sense of history and heritage. Scotland just always seemed to be there, and it was something that I took for granted would always be there. Of course, I missed my family when I went off to study in England – it is tough for any ten year-old to be away from their mother and father – but being away from my country at that time never aroused any sense of patriotism. It wasn’t until I was older and travelling more often that I started to appreciate being Scottish.”

She says that, despite being far from her family so frequently, she is still very much a product of her parents.

“I may look more Italian than Scottish, but I behave more like my mother,” she chuckles. “I am typically Scottish in many ways; practical perhaps, and maybe even conservative or reserved by nature. Listen to me – I can’t believe I am even admitting that!”

Being ‘Scotalian’ isn’t as rare a mix as one might think, she muses.

“There are a lot of us. Many Italians came to Scotland during and after World War II, setting up small shops and businesses all over the country. You would be hard-pressed not to find at least one Italian restaurant or ice cream parlour in each little town or village. The national palate has become a little, shall we say, stronger it recent years. Food is a very big deal with Italians, and we take it very seriously.

“Speaking of which, I should get going here. I have a wee bit of time before my next interview, and I really must get something to eat.”