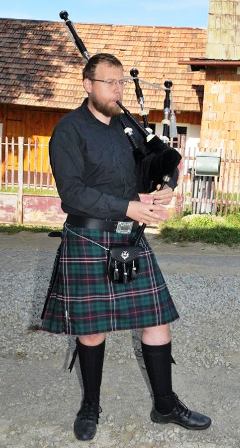 Down through the centuries the pipes have summoned many a man, to the home of a neighbour, to the churchyard or to the battle fields of Falkirk, Bannockburn and Culloden. While the days of hand to hand combat have long since passed, the pipes still have a compelling call, as one young Polish man can attest.

Witold Konopka, 28, was raised in the beautiful medieval city of Toruń, in the north of Poland. Like all Polish children he had a few rudimentary music lessons in primary school, but neither he, nor anyone in his family, ever learned to play an instrument.

Scotland was a distant country to the west about which he knew nothing and had no interest – until he “accidentally” watched the Academy Award-winning 1995 movie, Braveheart a few years ago.

The story of the legendary Scottish patriot William Wallace, who defeated the English forces at the Battle of Stirling Bridge in 1297 but was later captured and executed for high treason, completely captivated Konopka.

“To be honest, Scottish culture is not very popular in Poland so I had no clue about bagpipes,” he concedes. “Watching Braveheart, I fell in love with the soundtrack and the scenery. Since that day, I learned a lot about Celtic culture and bagpipe music.”

Increasingly entranced by the music, he made his way to Scotland in 2013.

“During the trip we visited many Scottish cities and interesting places. We saw some Scottish cultural performances, including live concerts by Scottish bagpipers. After seeing the Great Highland Bagpipes being played, I knew I wanted to be a part of it and I decided I would practice by myself.”

It was in the historic town of Stirling, in a small tribute to Braveheart, that Konopka purchased his first chanter.

“At that time I knew nothing about bagpipes and I bought a poor quality chanter and unfortunately, I didn’t know that.”

Poor quality or no, he persevered and made the acquaintance of several pipers in Poland, who happily taught him the basics. He also joined an Irish dance group. Six months ago bought his first set of bagpipes.

“I find the pipes exciting, challenging and yet, relaxing. Every minute I spend with my practice chanter and bagpipes is a precious experience and an escape from daily life.”

“I like different styles of piping from Scotland, Ireland and Bretagne. I also admire bands like the Red Hot Chilli Pipers and Bags of Rock.”

Even before he began playing, Konopka’s enthusiasm for Celtic culture led him to help organize a new Celtic festival. He notes that Poland had, until recently, one Celtic festival, which takes places in Bedzin – a five hour drive to the south.

“To spread the culture of Scotland, Ireland and Bretagne, we decided to create another festival for the north of Poland. As a result, the Celtic Gothic Festival was created in Toruń in 2012.”

Getting the festival off the ground and bringing international Celtic entertainers to Toruń has been a challenge. Celtic music is not widely known in the city of 200,000, the old quarter of which has been named by National Geographic as one of the 30 most beautiful places in the world. In the past year, however, the city has provided financial support to strengthen the gathering.

“People on the streets still look at a bagpiper in a kilt in surprise,” notes Konopka, “but I think interest is growing. For the past two years we have been able to organize a pipe band parade for pipers from Poland and the Ukraine.” He adds that the festival also includes lectures and workshops.

The country has only one pipe band, although two existed in the past, so Konopka is hoping to get a second one established in Toruń.

“I’d like to see more young people become interested. Recently I was at an international bagpipe festival in Slovakia and saw many talented young pipers. Many young people seem to play the pipes in Scotland, so one day I want to see the same in Poland.”

Personally, Konopka wants to improve his piping, participate in European events, and continue to spread Celtic culture in his native city.

“I also hope to be able to play the Scottish small pipes and the border pipes one day.”