10 Things to do in Ireland and Northern Ireland This Fall 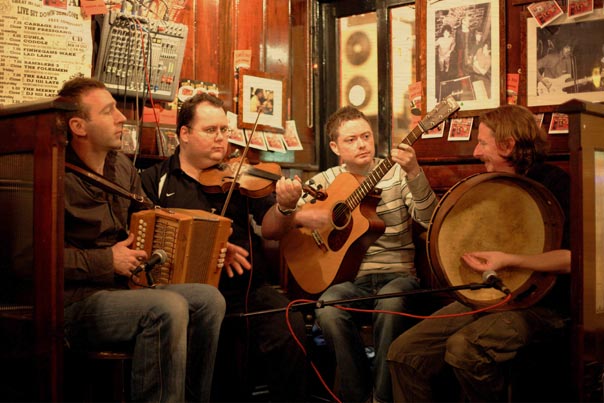 Festivals and events highlight the fall season in Ireland. Get out and enjoy harvest fairs, sports championships, traditional music and arts, guided weekend walks, creepy ghost tours, and much more.

Attend a Sports Championship
Gaelic football and hurling are some of the top spectator sports in Ireland and Northern Ireland, culminating in the All-Ireland Senior Championship Finals played in Dublin’s Croke Park in September. Attending an All-Ireland is the experience of a lifetime, but plan ahead as all 82,300 tickets usually sell out. You can visit the Gaelic Athletic Association (GAA) Museum at Croke Park year-round to learn about the history, see game highlights, and test your sports skills. Get a feel for game day on a stadium tour—visit team dressing rooms, run through the players tunnel onto the field pitchside, and catch views of the field from the sidelines and VIP seats. For bird’s-eye views of the stadium and Dublin’s skyline, take the guided Etihad Skyline Tour on the 17-story-high rooftop, where you will be hooked by harness to a railing.

Tour the Tombs at Glasnevin Cemetery
Ireland’s necropolis is Glasnevin Cemetery in Dublin where 1.5 million people have been buried since 1832, including famous patriots, poets, writers, and musicians. A guided tour tells fascinating stories of slain revolutionary leader Michael Collins, writer Brendan Behan, and Daniel O’Connell, the Liberator, buried in an ornate crypt beneath a round tower. Touch his inner wooden casket for luck. The museum chronicles burial practices, highlights the noted and notorious resting here, and offers a genealogy research center. A stop at John Kavanagh, also known as The Gravediggers, is a must after your cemetery tour. Established in 1833 and still run by the same family, the pub shares a back wall with the cemetery. Pub workers used to pass pints to the gravediggers through the cemetary railings during the workday. This is an authentic, old-style pub with a reputation for an excellent pint of Guinness.

Celebrate the Man Behind Dracula
Bram Stoker, author of the 1897 horror novel Dracula, was born in north Dublin, educated at Trinity College, and got his start writing theater reviews for a Dublin newspaper. Although his horror novels and short stories were written in London, Dublin hosts an extensive four-day festival at the end of October to honor his life, work, and legacy. Events are held across the city, which is illuminated with red lights. Sink your teeth into the Bram Stoker Festival with literary events, concerts of Gothic-inspired music, theatrical events, pop-up performances, and ghost walking tours. There’s also a Gothic Ball this year, plus a zip line through central Dublin—but only for those in costume.

Join A Walking Festival
Walking festivals offer many different guided treks, often hosted by rambling clubs, over a few days in a region. They provide access to hidden landscapes and overlooks, accompanied by local walkers happy to share stories. In the autumn, the colorful foliage is a bonus. A highlight of the Fermanagh Walking Festival in Northern Ireland in October is the ascent of 2,182-foot Cuilcagh Mountain, offering 360-degree views over the scenic lakelands region. The Gortmacconnell walk passes through forests and a rare blanket bog in the Marble Arch Caves Global Geopark, the only UNESCO geopark in Northern Ireland. The four-day Footfalls Wicklow Walking Festival at the end of October offers eight hikes on three levels of difficulty. Hikes might take in Glendalough’s sixth-century monastic settlement, Wicklow Gap, or St. Kevin’s Way. Be sure to book a sports massage for the evening.

Enjoy Traditional Irish Music
Nothing can compare with the foot-tapping brilliance of a traditional Irish music session, which might include fiddle, flute, uilleann pipes (also known as Irish bagpipes), button accordion, banjo, guitar, bodhran, concertina, harp, drums, and tin whistle. At a festival, there are musical concerts, informal pub sessions, and workshops for students along with singing and Irish dancing. The Mountshannon Traditional Festival in Clare at the end of September mixes boat trips to Holy Island on Lough Derg with music workshops, pub sessions, and a song competition. The John Dwyer Trad Weekend runs for three days in mid-October as part of Waterford’s larger Imagine Arts Festival. The William Kennedy Piping Festival in Armagh, Northern Ireland, in mid-November focuses on the uilleann pipes with a piping academy, concerts, sessions, reedmaking and pipe maintenance workshops, and a “Music on Canvas” art exhibition. It’s named for an 18th-century blind piper and pipemaker.

Go Ghost Hunting at Belfast’s Crumlin Road Gaol
Crumlin Road Gaol was the prison for Belfast’s hardcore prisoners from 1845 to 1996. This Victorian jail held many death row convicts, and 17 of them were executed here by hanging, the last one in 1961. Year-round daily tours take in the tunnel connecting the courthouse to the gaol, the condemned man’s cell, the execution chamber, and the graveyard. Included are the tales of political prisoners, those executed, suicides, hunger strikes, riots, and escapes. During the second half of October, take the Paranormal Tour that runs at night in low light for an extra creepy experience. This tour visits the flogging room and takes you to the hot spots of paranormal activity, as verified by paranormal investigators with detection equipment.

Appreciate the Arts in Northern Ireland
The vibrant arts scene in Northern Ireland is showcased in many popular fall festivals in Belfast. Culture Night Belfast is one intense night of free events held on a Friday in mid-September each year. Choose from around 240 different performances, workshops, gallery openings, concerts, tours, and dancing on the streets around the renowned Cathedral Quarter that night. The Belfast Festival at Queen’s runs for two weeks in October with an extensive lineup. There are premieres, edgy productions, and international performers. Launched more than 50 years ago, the festival has featured artists such as Jimi Hendrix, Dizzy Gillespie, Van Morrison, and the Chieftains. The 2014 event features Elvis Costello, a world-renowned flamenco dancer, and The Gloaming, an Irish-American folk supergroup led by fiddler Martin Hayes.

Enjoy the Fall Harvest
Since pagan times, harvest festivals have been held to give thanks for the bounty of the season—and to share it with family and neighbors. The Waterford Harvest Festival in mid-September is all about food from farm to fork around the region. Take advantage of cooking demonstrations by noted chefs, workshops, food displays, grow-it-yourself seminars, and foodie films. Sample artisanal food, buy from farmers in the market, and stop by the oyster festival and craft beer fest. Setting the scene are live music, farm animals on display, and art installations. The three-day National Ploughing Championships toward the end of September has become one of the biggest outdoor farming events in Europe, covering 700 acres. Established in 1931, it features international ploughing—or plowing, as it’s known in the U.S.—competitions, livestock shows, sheepdog trials, the All-Ireland Lamb Shearing contest, and the National Brown Bread Baking Competition. There’s vintage machinery, the latest farm equipment, and technological innovations too.

Root for Favorites at a Horse Racing Festival
Horse racing is keenly followed in Ireland and Northern Ireland, and race days are as much about the social aspects as they are about placing wagers. Some of the most popular racing is National Hunt or jump racing with horses running on grass tracks two miles long or more. Multiday race festivals offer a full-immersion experience; ladies, be sure to wear a hat on Ladies Day. The Listowel Harvest Festival the third week of September has long enticed farmers to wager some of their harvest proceeds. The Guinness Kerry National Chase is the highlight of National Hunt and Flat racing events here. The Northern Ireland Festival of Racing is held the first weekend in November at Lisburn’s Down Royal Racecourse, which was granted a Royal Charter in 1685. The JNwine.com Champion Chase race is part of the festival and is for many who follow the sport the most prestigious National Hunt event of the year in the north.

Delight in Autumn Gardens
Two high-concept gardens enhance the region’s colorful fall foliage with unusual elements and unique events. At the Samhain Winter Garden at Brigit’s Garden in Rosscahill, Galway, a massive earthworks depiction of a sleeping woman represents the Earth at rest, cradling a reflection pool that symbolizes life. In the Bealtaine Summer Garden, tie a wish to the fairy tree. And in early October, join in the seasonal feast of foraged and harvested ingredients from the garden. Named one of the top ten gardens in the world by the Daily Telegraph, Mount Stewart Gardens in Newtownards, Northern Ireland, features formal themed gardens, plus lake and woodland walks. There are still flowers blooming through the winter thanks to the mild climate, says head gardener Neil Porteous. He leads a special behind-the-scenes tour in early November. There’s an Autumn Fair in early October, and the Festival of Lights (the first three weekends in November), which transforms the grounds with colorful lights in the trees and ethereal fairy music.