10 Things to do in Ireland on a Budget 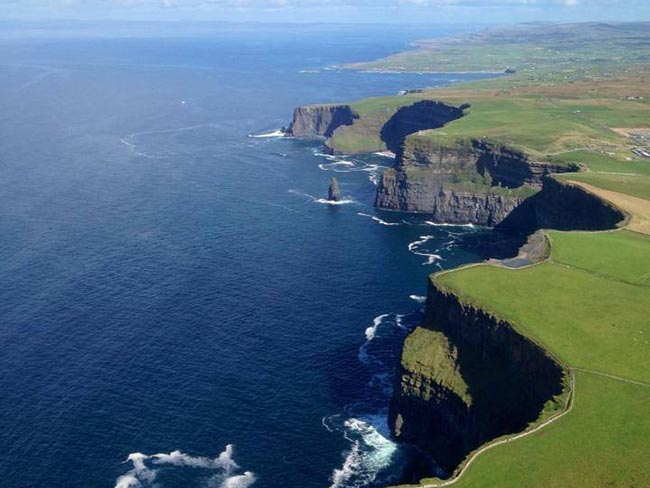 1. A guided walk from Doolin to the Cliffs of Moher
Take a guided walk from Doolin to the Cliffs of Moher. This is an easy three-hour ramble along the cliff tops from Doolin right to the Cliffs of Moher visitor center with local man Pat Sweeney, who leaves from outside Gus O’Connor’s Pub in Doolin everyday throughout the summer at 10 am. Pat and his family have farmed this land for generations so he not only knows the lie of the land but all of the history and culture behind it. Expect to hear some great stories and there is no end of stunning photo opportunities. You will see the waterfall, the sea stacks, the spot where – once upon a time – they lowered people over in a basket to collect seagulls’ eggs, the piper’s chair, and lots more besides. And don’t worry if you are tired you can get the bus back from the Cliffs of Moher. Pick a good day and you vwill have one of those ‘once in a lifetime experiences’ for just €5!

2. Fly from Inverin Airport
Take a scenic flight with Aer Arann from Inverin Airport (about 45 minutes west of Galway City) which costs €60 and departs daily throughout the summer at about noon. There is a limit of eight people per flight so my tip is to get there early to try and bag the co-pilot’s seat for the best views and photographs. This scenic flight lasts about 30 minutes and takes you south over Black Head and the Burren, down as far as the Cliffs of Moher, Hags Head towards Lahinch, before circling back and flying over the Aran Islands. You will see Inish Oír with its lighthouse and the famous wreck, Inish Meain with its miles of stone walls and finally Inish Mór with its dramatic wave lashed coastline and ancient stone fort, Dún Aengus perched 600 feet up on the cliffs. You can land (for an extra €25) and stay for a couple of hours to explore further on foot or by bike, buy an Aran sweater, swim in clear blue waters off pristine beaches or have lunch overlooking the harbor in Kilronan. A bus picks you up from the airport, the driver will point out landmarks on the way, cost €5 return. The return flight takes about ten minutes and gives you lovely views of the Twelve Bens (mountains) and Connemara.

3.  Derry’s Peace Bridge
Regardless of your religious denomination or political persuasion the hairs will stand on the back of your neck and tears will roll down your face when you walk across or stand on to it because we all recognize the exquisite relief that comes with peace. This curved iconic bridge was designed to symbolize a handshake of reconciliation across the Foyle between the Protestant and Catholic communities that had been divided for over hundreds of years culminating in “The Troubles,” which began in the 1960s and lasted till the Peace Agreement of 1998. Taking a guided tour of Derry City Walls with Martin McCrossan (£4) who has been leading tours for 20 years cleared it all up for me as I was finally able to link places like Fountain St and the Bogside with the events and get a real sense of place and history in a balanced and informative way. What really touched me was the Derry people’s perseverance and determination to achieve lasting peace and a viable economic future. No wonder it has been nicknamed Legen-derry! Being named the inaugural UK City of Culture was a huge bonus. Ebrington Square and newly renovated Guild Hall are a triumph, but the real jewel in the crown is the Peace Bridge. Put it on your bucket list.

4. Helicopter ride over the Giant’s Causeway
Take a helicopter ride over the Giant’s Causeway. Don’t pass up an opportunity to view the Giants Causeway, the Carrick-a-rede Ropebridge, Dunluce Castle, Portrush and the Mussenden Temple from the air. Okay it is pricey at £125 but it is an hour-long trip and well worth every penny, if you get a fine sunny day. Beyond spectacular, there are not enough superlatives that would actually do justice to this coastline, Binevenagh Head with the freshwater lake on top, Portrush and White Rocks Beach and Rathlin Island and Scotland away off in the distance. You can even stop off and have lunch in the Bushmill’s Inn, visit the distillery and get picked up later. Cutting Edge Helicopters also do shorter 30 minute trips up and over Lough Foyle and Binevenagh Head or out and around Inishowen Peninsula with its miles of sandy beaches and hidden coves for just £99. But if either of those are too expensive or you have no head for heights for you might consider a cheaper alternative which is the scenic train ride which hugs the coastline from Derry to Coleraine passing by Benone Strand and around Binevenagh Head with onward bus connection to the Giant’s Causeway for just £15 midweek (or £11 on Sunday), which includes unlimited travel for the day. This means you can hop on and hop off for sightseeing, a swim or lunch. This train line was described by Michael Palin, who knows about these things, as one of the most beautiful rail journeys in the world.

5. The Inishowen 100 scenic route
The Inishowen 100 runs around the perimeter of Inishowen Peninsula, in Donegal, boasting more views per square mile than most of Ireland (and that’s saying something)! In fact, you can see the sea from just about everywhere on Inishowen. You can drive out from Derry and go up the west coast via Buncrana or take the ferry across Lough Foyle from Magilligan Point, which runs every hour throughout the summer with a handy roll on, roll off service and go up the East coast. There’s is a nice pub called The Point which serves good food and pints (sure you can always catch the next ferry). Whatever you do, don’t miss taking a detour to see Kinnego Bay, where the Spanish Armada ship the Trinidad Valencera sank in 1588. It was only discovered some 400 years later by Derry sub-aqua club. You can see what they found in the Tower Museum in Derry. Drive on out to Malin Head and over to the Isle of Doagh past Five Fingers Strand to visit the fantastic Famine Village, which tells it like the old people told it to them. Keep an eye out for the eagles at Mamore Gap on the way over to Dunree Fort overlooking Fanad Head on the opposite side of Lough Swilly. Finish up by watching the sunset at Grianan an Ailleach, an ancient 3 ringed stone fort high on the hillside at Burt on the way back to Derry.

6. The Beara Penisula
Visit the Beara Peninsula, County Cork at the other end of the country from Malin Head. The Beara Peninsula is sandwiched between the Iveragh Peninsula (Ring of Kerry) Sheep’s Head, and West Cork. Beara is like rural Ireland was 20 or 30 years ago, totally tranquil and unspoiled. The tour buses don’t go there, in fact it is highly unlikely that you will meet any other hire cars on the roads out and around, Ardgroom, Eyeries and Aillihies, Castletownbere and Adrigole. That’s probably just as well as you will be stopping every two minutes to take, yet another, picture postcard photograph. Beara is completely forgotten about with the competition for scenery from West Cork, the Ring of Kerry, and Dingle. With a foot in both counties the border runs along the top of the Healy Pass another jaw-droppingly beautiful drive above (literally) and beyond many other road trips in Ireland, you will love it.

7. Lose yourself in Fermanagh Lakelands
County Fermanagh this is another small corner of Northern Ireland that seems to have been completely forgotten about, apart from a short blaze of International media glory last June when the world leaders gathered in Enniskillen for the G8 summit. Lush, green rolling pastures, it is very sparsely populated outside of the towns and villages, give way to shimmering lakes of all sizes including the enormous Upper and Lower Lough Erne. The roads are silky smooth and devoid of traffic and tour buses, even the shortest route (all new to me) is scenic and totally charming, although the jewel in the crown has to be Maghoo Cliffs for its view of the lakes and forests. And there certainly isn’t another county in Ireland that I can think of that has such a diversity of things to do and see, including the Marble Arch Caves, Belleek Pottery, and Castle Coole (without doubt the finest stately home in all of Ireland) and Boa Island with it 2000 year old Janus Stone, all within handy driving range of the main town of Enniskillen with its landmark castle which straddles upper and lower Lough Erne.

8. Hop over to Tory Island
County Donegal Ireland’s most northerly, inhabited island and a bit of a trek to be honest, but so worth it, for anyone who cares to make the hour long journey North of Letterkenny to Magheroarty (a visual feast of mountainous landscapes in itself) where the ferry departs daily. Every passenger or new visitor to the island is greeted by the King of Tory, Patsy Dan Rodgers. While Tory Island is a Gaeltacht (Irish speaking area) Patsy and the rest of the 100 odd islanders are bilingual and great talkers, musicians and painters. You can easily see where they get the artistic inspiration if you take any of the walking trails about the island, look back at the mainland and you will see the mountains of Donegal, the steep cliffs, sea stacks and crystal clear waters brimming with fish while seabirds of every kind circling above you.

9. Bask on the Great Blasket
The Great Blasket, Dingle, County Kerry what a pleasure it is to walk (barefoot) in Peig Sayers’ footsteps along the green roads of this long deserted but very beautiful island. A looped grass walk takes you high above the lonesome houses with stunning views back towards Slea Head on the Dingle Peninsula and the Magillacuddy Reeks on the Iveragh Peninsula due South across the water and on out to the dramatic Skelligs. It is all very peaceful and balmy, watching the giant basking sharks filter plankton below the steep cliffs which drop hundreds of feet sheer away, straight into the ocean. The path splits at the ‘traffic lights’ as the junction with the other side of the island is fondly called even though there are no cars on the island never mind electricity. There is one well but no toilets or even a shop so be sure to bring plenty of water and better still a nice picnic if you are going out there for the day. Even more jagged cliffs line the route back to Trá Bán (white beach) where you can sunbathe or swim (the water is always icy even on a summers day) or watch the grey seals play as they dart in and out of the translucent water.

10. Indulge your Celtic soul on Inis Cealtra
Inis Cealtra (Holy Island) on Lough Derg is unique, even in Ireland, in that there are monuments and artifacts there dating back some 7,000 years (long before any written evidence) that have survived intact and in-situ (almost) to the present day exactly because of its island location. From the bullaun stones of the Celts to the 8th century grave slabs in the Saints Graveyard, 10th century high crosses in St Caimin’s church, pilgrims paths and kissing stone and a lot more besides. Inish Cealtra was one of the principal places of pilgrimage in Ireland (which was more about feasting than punishment) which your guide Gerard Madden will glad tell you all about. But even if you know nothing at all about Irish history or are not even remotely religious stepping ashore on Inis Cealtra (a short boat ride from Mountshannon Harbour) is a very special experience, as apart from the 1,000s of years of history, Holy Island’s natural beauty is palpable.