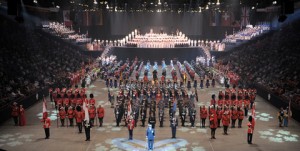 With a lineup that spans the globe, the 2013 Royal Nova Scotia International Tattoo is sure to be the event of the summer.

Performers from five countries will assemble at the Halifax Metro Centre and create a dynamic two-and-a-half-hour show reserved just for Tattoo audiences. With a variety of performances and talents ready to be showcased, there is something for everybody to enjoy this summer.

The Pipes and Drums of Christchurch City, New Zealand, will make its Tattoo debut; as will Celtic rock group The American Rogues, and The Citadel Regimental Band and Pipes.

The Flying Saxons from Germany will perform a dazzling aerial routine unlike anything Tattoo audiences have ever seen.

Rounding out the German performers, the Hamburg Police Motorcycle Display Team will show off its tricks while the Luftwaffenmusikkorps 1 performs its brand of German military music, with hints of Bavaria. The German Artistic Cycling Team will offer some antics that should not be tried at home.

The OzScot Dancers of Australia will present their unique blend of traditional Highland dance steps with contemporary movements, creating a traditional yet modern performance.

Liz Rigney, a beloved Nova Scotian journalist and performer; Derrick Paul Miller, a classically trained singer with an immense musical repertoire; and Marcel d’Entremont, described as one of the finest young male vocalists to come out of the Nova Scotian music scene in years.

The Naval Gun Race returns again, after popular demand revived the event for last year’s Tattoo. Teams will take apart a 1,000 pound field gun, race across the Metro Centre floor, and reassemble the gun on the other side.

The Tri-Service Obstacle Race will feature teams from each branch of the Canadian Military, two teams going head-to-head each night for the chance to win the Major Doug Bell CD Memorial Trophy. Start placing your bets – Navy, Army, or Air Force?

This year you will see a Drill Team from the 2nd Battalion, The Royal Canadian Regiment. Also representing Canada is the Royal Canadian Mounted Police National Ceremonial Troop, with its dismounted cavalry lance drill display, the only performance of its kind in the world.

The Tattoo Choir and Tattoo Children’s Chorus, both comprised of the brightest singers around, will return again; as will the Tattoo Highland Dancers, local and national dancers with a contingent of RCMP Highland Dancers. The Nova Scotia Irish Dancers will perform as a collective of some of the best Irish dancers in the province.

Like every year, the Canadian Forces will be a central part of the Tattoo. The Stadacona Band of Maritime Forces Atlantic, the Land Force Atlantic Area Band, the National Band of the Naval Reserve, the Army and RCAF Pipes & Drums, and the Cadets Canada Organization are all slated to perform.

The themes for this year’s Tattoo include the Battle of the Atlantic, which was the longest continuous military campaign of World War II, running from 1939 until the German defeat in 1945; and the capture of the USS Chesapeake by the HMS Shannon in the Battle of Boston Harbour on June 1, 1813.