2015 International Gathering of the Clans 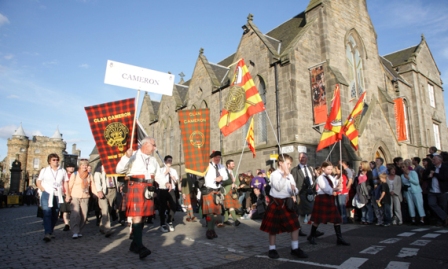 Events will run from July 1st beginning with a flag raising ceremony at the Pugwash Gathering of the Clans.

The Official Opening will be held in Halifax on July 3rd at the Grand Parade in Halifax. The Royal Nova Scotia International Tattoo in Nova Scotia will be running during the first week with acts from all over the world and it is hoped that the IGC will be formally recognized by the Tattoo on July 3.

Events will be held in the Halifax area during the first weekend before moving to the Antigonish Highland Games the following week. From there, the IGC will head to Pictou County for the New Glasgow Festival of the Tartans.

The third week of July will be the final week for IGC 2015 and will be packed with events leading to the formal closing ceremonies in Yarmouth. It is hoped that Scots from all over the world will turn their eyes toward New Scotland for 2015.

Nova Scotia is known for its many musical entertainers, Celtic singers, and world-class fiddlers. Along with its scenic coastal villages , sandy beaches, lobster in all its delicious forms, and its historical settlements of not only Scots but Irish, Germans, English, Ulster Scots, Acadian French, Aboriginal people and many other multicultural groups make this seaside province a place to experience the best of culture and cuisine is a compact and accessible package.

The Ship Hector brought some of the first Scottish Settlers to our shores and a replica rides the waves in the Historical town of Pictou inviting you to come aboard and reach back through time.

Historic villages are found throughout the province – the Highland Village at Iona, Sherbrook Village a working village and Ross Farm to name but a few of the many interesting places to visit.

Fort Anne, Port Royal, the Halifax Citadel, and the Fortress Louisbourg are but a few more places to capture the imagination. Drummers, Pipers, historical re-enactments are all here to catch the fancy. Nova Scotia is also home to the world famous Royal Gaelic College.

Come learn the ancestral language in beautiful Cape Breton and join in the “Gathering” on New Scotland’s shores.