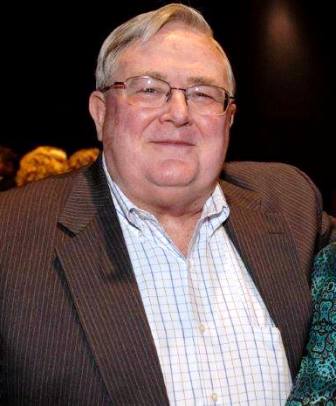 The 35th annual Milwaukee Irish Festival kicks-off today. Recently we spoke with founder Ed Ward about the event and what attendees can expect over the coming days.

What are your own roots?
Irish-American

When and why did you get involved with this event, and what are your current roles and responsibilities there?
I founded Milwaukee Irish Fest in 1980 and have been involved with the festival ever since. Both my mother and father’s ancestors were from Ireland, so the culture has always been a part of who I am and important to my entire family. For the first 11 years, I was the executive director of Irish Fest. Since then, I have served in many different roles, including being a board member for the past 35 years, President of the Board and responsible for finding and booking the entertainment. My entire family has been involved with Irish Fest since the day they were born, including my wife Catherine, who is the current President of the Board. This year’s festival (August 13 – 16, 2015) is especially remarkable because it’s our 35th anniversary.  We’re so thankful to the community and all of our volunteers for making Milwaukee Irish Fest the largest Irish festival in the world.

Why is it an important event for the community?
For 35 years, Milwaukee Irish Fest has a positive social, cultural and financial impact on the Milwaukee region. According to a new study commissioned by United Ethnic Festivals (UEF) in 2013, Milwaukee Irish Fest contributes more than $20 million to the local economy and generates more than $1.2 million in local and state taxes annually. The festival creates more than 260 full-time equivalent jobs and positively impacts a wide variety of industries, including retail, restaurants, hotels and more. Plus, Milwaukee Irish Fest is more than just a festival – we are a year-round organization celebrating all things Irish, Irish American and Celtic culture. This is possible through a variety ofprogramming initiatives, including: the Irish Fest School of Music,Ward Irish Music Archives, concerts, family activities and more.

Who traditionally attends the Festival?
Each year, approximately 125,000 peopleattend the world’s largest Irish festival. We welcome people from all over the world, including the U.S., Canada, Ireland, Northern Ireland, Scotland and European mainland.  The festival attracts a large number of people from the Midwestern United States.

What can they expect this year?
Celebrating its 35th anniversary, Milwaukee Irish Fest is offering the widest selection of Irish and Celtic music to date. More than 100 Irish and Celtic acts on 17 stages will be featured at the festival, including fan favorites such asRed Hot Chilli Pipers and The Willis Clan, plus new emerging artists like Flashpoint and Kilkennys.Every year Milwaukee Irish Fest highlights a unique aspect of Celtic culture. This year, the Living Traditions showcase will celebrate the traditional sounds of Ireland and contemporary Irish and Celtic music.Performers will include: Cherish the Ladies, Dallahan, Eileen Ivers and Immigrant Soul, Flashpoint, FullSet, Goitse, John Whelan, Liz Carroll, Lúnasa, Moloney, Keane, and O’Connell, Matt Molloy, John Carty and Arty McGlynn, Morga, Pride of New York, Ross Ainslie and Jarlath Henderson, Socks in the Frying Pan, Ten Strings and a Goat Skin, Tim Edey and Brendan Power, and We Banjo 3. In addition to music, guests can celebrate Irish and Celtic culture through shopping, sports, dining, theatre and more. From the Jameson Lounge to the Celtic Canines, there is an event for everyone in the family. For food, guests can participate in a baking contest or sit back and enjoy live cooking demonstrations. Sport enthusiasts can have their pick of tug-o-war matches, currach races, hurling, Lilli-Put miniature golfing or even a 5k run/walk.  Other activities include the Leprechaun Village, Irish Language Workshop and the Milwaukee Irish Fest Mass for Peace and Justice.

How has the event evolved through the years?
Since 1980, Milwaukee Irish Fest has been introducing American audiences to contemporary traditional Irish music. Today, 35 years later, it is the world’s largest celebration of Celtic music and culture by strivingto highlight the contributions of Ireland to the American way of life through educating and entertaining guestswith all things Irish. Irish Fest was the forerunner in the revival of Irish and Celtic music in the early 1980’s, featuring the best artists in Ireland and Northern Ireland, young and old, male and female, singers, dancers and traditional musicians. In keeping with that tradition, this year’s festival will feature the Living Tradition Showcase which will highlight traditional Irish music with festival favorites, as well as up-and-coming new artists. Irish Fest finds the best traditional and folk musicians by sending entertainment representatives to Ireland and other Celtic countries and attending multiple showcases throughout the world. In addition, Irish Fest has consistently and successfully bridged the gap between Irish music and its Pan-Celtic cousins featuring music from Scotland, Great Brittan, and Canada every year. More than just a festival, Milwaukee Irish Fest has great strides in becoming a year-round and global organization thanks to the creativity, dedication and commitment of an army of volunteers who share the vision of the original organizers and continue to move it forward.For example, the Irish Fest School of Music offers music and cultural instruction as part of our annual Irish Fest Summer School. At the Ward Irish Music Archives, we house the largest public collection of Irish music in America. The archive currently consists of more than 40,000 Irish music recordings and pieces of memorabilia. The diverse collection focuses on subjects such as Irish traditional music, Irish folk songs, Scottish music, and Irish contributions to American popular music. In addition, Irish Fest hosts multiple events throughout the year such as the Celtic Boutique, Family Day in the Village and most recently, An Irish Night at the Museum. We also have relationships with a variety of dignitaries, political, civic and religious leaders and arts and tourism officials from the Republic of Ireland, Northern Ireland, Scotland, Great Brittan, and Canada – particularly Nova Scotia.

Will you remain involved with the event in the years ahead?
As the founder of Milwaukee Irish Fest, I will always be a part of it because of my ties to the organization. I never imagined when I started Irish Fest 35 years ago, that it would turn into the largest Irish festival in the world. It has been an incredible experience and one that I am most profoundly proud of because Irish Fest is more than just a festival. It is an experience where we can enjoy the greatest music, food, theater, sports and shopping that the Irish and Celtic cultures have to offer at year-round events in the community. I cannot wait to see how Irish Fest continues to grow over the next 35 years.

How else are you involved with the Celtic community there?
Prior to the founding of Irish Fest I was, and continue to be, involved in the local Shamrock Club, where I served as a former president.  In addition, many local Irish and Celtic organizations are a result of Irish Fest, including a theater group, genealogical society, Curragh club, plus many more. For example, in 1981 there was one local Irish dance school with around 30 dancers. Today, there are six Irish dance schools in the Milwaukee area with several thousand dancers. Irish Fest has also brought the finest Irish and Celtic artists to the area for year-round performances. We are thrilled that Irish Fest has had such a big influence on bringing Irish culture to the Milwaukee area.

Is enough being done to preserve and promote Celtic culture generally?
Locally, the local Irish and Celtic culture is very strong and diverse due to a variety of initiatives founded and spearheaded by Irish Fest. Over the years, we’ve added a summer school, music archive, foundation, choir, music school and other year around events that promote the Celtic culture. I have been to other festivals throughout the world and have noticed they are following in our footsteps by starting to promote Celtic culture year-round. Due to these events, I believe public interest in Celtic culture and music is seeing a steady increase.

What can we be doing better?
A goal of ours is to work more closely with other local and regional organizations who promote the Irish and Celtic cultures. Since we are considered the “Mother of All” Irish festivals, we’d love to continue to collaborate with other organizations who share a passion for all things Irish.