5 Bars Worth A Dram 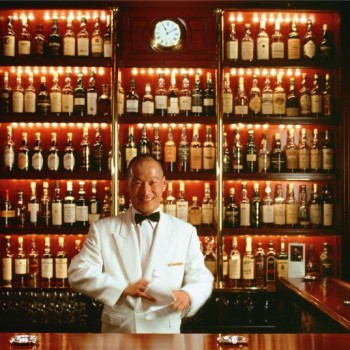 The Pot Still
Glasgow, Scotland
The Pot Still has been referred to as the best bar in Glasgow and Scotland’s top whisky pub, and was named the world’s Best Bar/Restaurant on at least two occasions by Whisky Magazine. In 2007 the magazine wrote, “The perfect example of what a whisky bar should be, understated and unassuming until you look up behind the bar….” Behind the bar are around 400 bottles of single malt whisky! The establishment serves up traditional pub fare — not fine dining by any means — but last year, the Daily Record reported that TripAdvisor submissions collectively ranked the bar as the best place to eat in Glasgow. www.thepotstill.co.uk

The White House
Peel, Isle of Man
The White House was awarded Pub of the Year for 2013 by the Isle of Man’s CAMRA (Campaign for Real Ale) branch, making it the sixth time they were bestowed with the title. With up to nine ales on tap at a time — they’ve served at least 1,700 different guest ales from across the British Isles — the Peel establishment certainly whets the palates of the beer-thirsty clientele. However, whisky connoisseurs have even more choices — more than 140 single malt whiskies! The White House is also a social hub with pool, darts, local music and other events. www.thewhitehousepeel.com

The Trengilly Wartha Inn
Constantine, Cornwall, UK
At The Trengilly Wartha Inn, visitors sleep overnight in 11 country guest rooms, take a walk around the inn’s tranquil gardens, delight in a locally-sourced, chef-crafted meals and partake in weekly social activities such as instrumental jams. The on-site bar is also a treat for overnight guests, locals or patrons passing through. It has been awarded second place for CAMRA’s Pub of the Year category and won Westcountry Family Pub of the Year. Along with an impressive wine and real-ale menu, the bar has 60 different types of whiskies. www.trengilly.co.uk

O’Connell’s Irish Pub
Rennes, Brittany, France
Naturally, a number of Dublin’s Temple Bar District establishments are worthy of mention, such as The Palace Bar, a favourite of the late Nobel Laureate Seamus Heaney, and Temple Bar itself, the home of Ireland’s largest collection of whiskies. You can imbibe and experience a similar vibe in Galicia’s capital at O’Connell’s Irish Pub. It describes itself as a “piece of Temple Bar teleported right on Place du Parlement in Rennes.” Authors Dominique Auzias and Jean-Paul Labourdette included O’Connell’s in their book, Guide de l’amateur de whisky, noting the pub’s friendly atmosphere highlighted by traditional Irish performances, as well as rugby matches on the big screen. While beer reigns supreme, the authors state that its whisky selection and “snake bite” mixtures are also standouts. www.oconnellspub.fr

Bittles Bar
Belfast, Northern Ireland
Bittles Bar’s distinctiveness begins with its narrow, flat-iron shape. Inside the triangular pub, a range of artwork adorns the walls, including tributes to Yeats and Wilde, and local works portraying Northern Ireland scenes. Bittles has an extensive array of local and international beers, as well as ciders. Its impressive collection of whiskies, jam-packed on shelf after shelf, does the moniker “Bittles Famous Whiskey Bar” justice. A mixed crowd of patrons, friendly staff and generous pub fare add to the pub’s addictive atmosphere. www.facebook.com/pages/Bittles-Bar/109710919141801