A Book You’ll Swear By 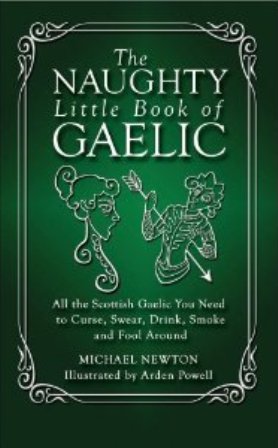 If you’ve ever had a hankering to curse in Gaelic, then Michael Newton is just the guy to help you out. His latest publication is The Naughty Little Book of Gaelic (All the Scottish Gaelic You Need to Curse, Swear, Drink, Smoke and Fool Around). Newton is no longshoreman, however. He is currently recognized as one of the top scholars in Scottish studies in the United States.

When people learn Gaelic – especially those in high school or college – one of the obvious questions that comes to mind is how to say the typical things that young people say: drinking, swearing, smoking, sex, etc. You won’t find many of those words in books that teach Gaelic, and you might get the false impression that no Gaels engaged in such behaviours.

In the summer of 2011, my wife and I were touring around Ireland and I saw a very funny book about Irish curses with hilarious cartoons in a book store, and it hit me that a book like that, that brought together a wide range of taboo terminology and phrases, would be really fun to work on. There are lots of great resources for Gaelic learners, but there could be more that brings out the vivacity and humour of Gaelic life.

Once I decided I wanted to do it, it didn’t take too long to get a foundation of material from old printed sources. But it took time to extract more words and phrases from people in conversations, especially since people don’t use these Gaelic words and phrases around people they don’t know well. I got some really colourful and unusual phrases by asking people what they knew and by promising to keep them anonymous.

It wasn’t always easy to decide what to keep in and what to leave out. The book is meant to be a light-hearted but useful collection of words, songs and lore from a range of Gaelic communities over a long period of time. I want to be inclusive of materials, but not tediously so.

I usually write about academic topics, so being able to work on something so amusing and comical was a nice change of pace. Plus now I have a lot of new, colourful words to use. I’ll have to be careful about using them around my baby girl, though.

Language gives you great insight into how cultures work and what their values are. It’s very telling that so many English curse words associate bodily functions and sexual organs with shame and indignity. That’s rarely the case in Gaelic. Like the Scandinavians, it is more natural for Gaels to express anger and hostility by referring to death, suffering and bad luck. It is funny that swear words, curses and toasts are sometimes the first and only words that people learn in a non-native language. Even though Gaelic is not widely spoken in Eastern Nova Scotia at this point, many people still recognize and remember these kinds of things in Gaelic.