A Caper in Cuba Too! 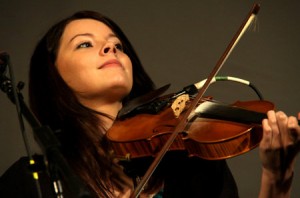 As a Canadian fiddler with a firm foundation in the traditional music of Cape Breton and the irrepressible curiosity of an artist driven to create and discover, Chrissy Crowley is now bringing her music worldwide, performing throughout Canada, the United States, as well as Ireland, Scotland, and the Dominican Republic, captivating audiences with a talent that belies her youth. Crowley’s new release, the second recording for the 20-year-old artist, is aptly named “The Departure”. This week she returns to Havana to perform at CeltFest Cuba 2012.

What inspired you to start fiddling?
I come from a musical family. My grandfather from Newfoundland played Irish fiddle; my grandfather from Cape Breton played Cape Breton/Scottish fiddle. Both of my grandfathers passed away when I was very young so it wasn’t until I was 12 that I realized how musical of a family I come from. Jason Roach, a piano player from Cheticamp, brought a fiddler to my grandmother’s house to play. I fell in love with the music and decided to start playing the next day. Jason, despite being a piano player and not a fiddler, actually taught me the basics, and I taught myself from that point on… so if you notice any mistakes in my playing, blame Jason 😉 I became obsessed with it and would roll out of bed, grab my fiddle and play for hours. I used to pretend I was sick so I could stay home from school and play. After I started learning to play Cape Breton style, I studied the Irish music as well and I’ve become a bit of a hybrid fiddler. I travel frequently with my music and love studying different styles of fiddle playing. I don’t consider myself limited to one genre because of where I was raised, but there will always be hints of Cape Breton in my music no matter what style I’m playing.

What events will you be involved with this year?
I’m recording a new album for the month of May, which will be released in June. In June, I go on an international tour until the end of August, including performances in Ireland for the North Atlantic Fiddle Convention, a two week Eastern United States theatre tour, the Maine Celtic Celebration (ME), Saltwater Music Festival (ME), Catskills Irish Music Week (NY), the World of Music Arts and Dance Festival in England, Festival Interceltique in France, then back to the States for Milwaulkee Irish Fest and another theatre tour!

How did you get involved with CeltFest Cuba?
I became involved with Celtfest Cuba through my manager at the time, Lisa Butchart, of Offshore Gael Music. Lisa came up with the initial idea of having a Celtic festival in Cuba after learning about the Celtic pipe bands in Havana. She asked me if I’d go to Cuba with her and I told her I’d just about do anything to get away from the snow. We went down together to see what the potential was and I realized how much more there was to Cuba than warm weather! We also realized when we went down that there were pipers in the Galiacan pipe band that also played classical violin. They didn’t think of violin/fiddle as a Celtic instrument but would do some Classical-style backing to the slower pipe tunes. Lisa gave them some books and CDs and I taught them Celtic fiddle basics. When we went back the next year, they had mastered everything we gave them! They had learned almost every tune on the CDs and wanted more!

What has your experience there been like?
I’ve travelled quite a bit and I don’t think any place has had an effect on me like Cuba. Cuba has an amazing history to begin with but its the appreciation of music in general down there that touches me the most. There is an incredible number of musicians in Havana of all styles who always look forward to sharing their music and having you share yours. In the first year of Celtfest, I went from dancing with a tango troupe to being hauled up on stage to play with a Caribbean style drum band. Mind you, the tango troupe told me Canadians don’t know how move their butts and I politely informed them its because we don’t have one to begin with.

Why is it an important event for the  Celtic community?
The best way to promote the Celtic culture is to pass it on to young, eager students and broaden its reach. In the fiddle, guitar, pipes, dance and flute workshops we do for Celtfest, all the students are appreciative of the opportunity to learn and work harder than any group of students I’ve ever had. The Cubans don’t really have an option to go elsewhere for Celtic studies. It’s very difficult for them to leave the country and very expensive to fly someone in. Celtfest workshops provide them with what they need to learn and study further on their own. Last year, Celtfest brought down books and spare strings for the fiddlers, and recorders for the pipers to practice on. More importantly- Celtfest recognizes Cuba as a Celtic nation among Scotland, Ireland, Spain, etc. The Cuban pipe bands deserve attention for the hard work they’ve put into their craft and recognition on other international stages someone like myself has had. Celtic Colours International Festival hired the Cuban pipers a couple of years ago and put it best when they said the Spanish Celtic influence in Cuba can not be ignored.

In your estimation , is enough being done to promote Celtic culture today?
As far as my home province of Nova Scotia, there has been an incredible amount of work done to preserve and promote Celtic Culture, especially a focus in the last couple of years in the Gaelic language. This can be seen from learning programs offered by the Gaelic College of Arts and Crafts, to the growing amount of research and archiving  by academics in musicology and folklore. Places like the Beaton Institute at Cape Breton University and the Celtic Music Interpretive Centre in Judique, Cape Breton, have easily accessible archives which have helped musicians, singers, and researchers immensely from finding an old tune to recording a promotional video. The various Celtic nations have a growing number of exchanges in performers as well. Festivals have taken a stronger initiative to work together in sending musicians across the altantic to partnered events. In 1978, a group of Cape Breton musicians were invited to take part in the first ever transatlantic ceilidh produced by BBC Scotland and CBC Sydney. This past summer, the BBC and CBC Sydney arranged for the BBC to come to Cape Breton to record a live ceilidh which included myself, Kenneth MacKenzie, Glen Graham, the Cottars with Rachel Davis, and more. Kenneth and myself will be traveling to England this summer to do another taping. We’re also seeing many new and innovative Celtic music bands which, although taking a contemporary approach to the music, draw attention to its traditional roots. All music evolves to a certain extent. As long as we continue to acknowledge our past performers with their traditonal styles,  whether it be through archiving or Celtic arts schools, the evolution Celtic music is experiencing today will be a healthy one.

What’s next on your own creative agenda?
All creative energies are pointed to the new CD right now. I decided on a whim to do another album a month ago… It could be the snow getting to me again hahaha! I literally looked up and said “Wow…I have nothing to do for the next couple of weeks… I think I’ll make a CD now.” Luckily, everything fell into place to make it happen. I’m the type of person that gets uncomfortable when there’s too much time on my hands. I struggle with down time! I live for the chaos of touring and making a new record.