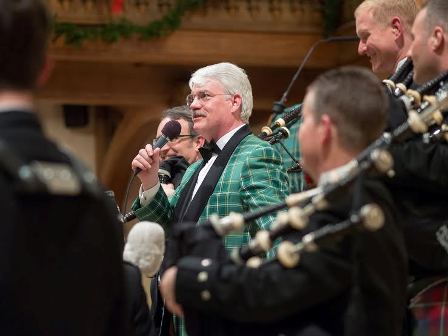 For many, the Pipes of Christmas has become an integral part of their holiday season. The annual tradition, performed in New York City and Summit, New Jersey, features the triumphant sounds of bagpipes, brass, drums and organ, as well as the soothing sounds of harp, fiddle, acoustic guitar and flute. These are all woven together with Scottish, Irish and Welsh stories told and sung in English, Gaelic  and old Scots.

“It’s the best holiday celebration in New York City, and this comes from a cynical soul who has all but given up on Christmas,” declares Sarah B. Roberts, blogger at Adventures in the Endless Pursuit of Entertainment. “It also stirs up my wee dram of Celtic blood and makes my soul soar! I plan my entire December around the Pipes of Christmas.”

“One patron brings his entire family every year,” shares Bob Currie, president of the Clan Currie Society and producer of the Pipes of Christmas. “Everyone is spread out on Christmas Day itself, so this is how they spend Christmas together. He just bought 50 tickets for this year!”

Along with a loyal audience, the Pipes of Christmas enjoys a faithful company of musical talent from across North America and Scotland. These include the Solid Brass ensemble, New England fiddle champion Paul Woodiel and uilleann piper Christopher Layer. The latter are both players in Sting’s Broadway musical The Last Ship. Other performers include the lead guitarist for Jersey Boys,  Steve Gibb; the “First Lady of Scottish Country Dance Music,” Susie Petrov; acclaimed harpist Jennifer Port, and the Kevin Ray Blandford Memorial Pipe Band, named in honour of the Pipe Major  who co-founded Pipes of Christmas.

While much of the program features traditional tunes, the Pipes of Christmas also showcases compositions never performed before.

“I’ve been quite pleased with our ability to offer new music composed by some very fine Scottish composers,” says Currie. “We began this tradition back in 2001 when Pipe Master Blandford composed Lament for the Lost, a haunting piece to commemorate the 9/11 terror attacks.

“This year we are thrilled to be hosting the winner of the Alexander McCall Smith Prize for Composition which we coordinate with our generous sponsors from Edinburgh Napier University,” adds Currie. “If last year’s selection is an indication of the quality of music we can expect from ENU students this year, we’ll be in for a great treat.”

A tribute to the renowned Cape Breton fiddler, the late Buddy MacMaster, will also be included in this year’s program.