A Passage into Popular Culture 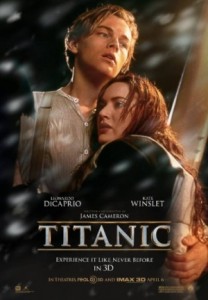 Sometimes it seems cave painting is the only art form that has not taken on the never-gets-old drama of the Titanic’s doomed maiden voyage.

The saga is so compelling that the most faithful of all the filmed accounts — 1958’s “A Night To Remember” — routinely causes audiences to scoff at the unlikely melodrama, questionable coincidences and implausible heroics.

Yet it’s all true.

“It’s this great sort of metaphorical novel that actually happened,” said James Cameron, who directed the 1997 blockbuster film about the disaster.

The first movie made about the Titanic came out just weeks after the sinking. It starred Dorothy Gibson, an actress who was sailing in First Class and who was one of the first into a lifeboat.

In the 10-minute silent movie, now lost, she wore the same dress for accuracy, but was shown heroically rescuing people, which never happened.

The Library of Congress has two boxes of sheet music covering the songs sung about the ship just between 1912 and 1914.

Wars and the Depression distracted the nation and interest flagged somewhat until 1955, when Walter Lord published his thrilling, meticulously researched account, “A Night To Remember.” The book has not been out of print since.

Definitive publishing numbers are not available, but Amazon.com currently lists 1,327 different paperbacks for sale with Titanic in the title.

According to Bowker Market Research, 98 Titanic books have come out in 2012 alone. And it’s only April.

“It’s a timeless story that can be told from so many different angles that it generates virtually endless fodder for authors and publishers,” said Bowker vice president Kelly Gallagher.

The 1985 discovery of the broken ship on the ocean floor two miles down plunged a new generation into Titanicmania, as did Cameron’s film 12 years later.

Now the centenary is introducing another generation to the epic tale.

Cameron’s movie is out in 3-D, and two mega-budget TV miniseries are coming, along with a slew of fresh documentaries. Oh, and lest we forget such a fitting tribute from The Irish Rovers.