A SONG FOR FATHER FRANCIS ~ PART 2 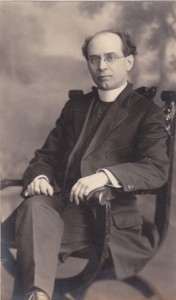 Reluctant, and inflexibly, holding my purse for a quick get-away, but unable to resist hearing about my father, I take a chair.

“With such a gift from God, ‘tisn’t so much a matter of the subject, the magic was in the telling. You’d have to have been there, but ah, yes, we laughed.”

“During retreat?” I ask, pointedly mean.

“Yes,” he admits, casting his eyes sheepishly downward, and I am surprised by my response: not gloating, but remembering my own college retreats, when after a day of silence, we would gather in each other’s rooms and talk. And I smile in spite of myself.

“Ah, Michael… Your father would be proud of such a grand girl as yourself.”

“Father Francis, are you from Ireland?”

“Do you know the town of Clonmel?” His face lights up at the name. “Ah! Many’s the time I walked to mass at St. Mary’s in Clonmel.”

Well, I am not about to tell this old priest about the affair I had with a handsome Irishman who played in a band—the reason I happened to spend a week in Clonmel.

“I’ve spent some time in Ireland, Father,” I say, “working on a publishing project,” and this is not a lie. “I had a friend from there. We used to go to the singing pub on the green.”

He is amazed and elated. “Sing me something, then, Child.”

“I have been to Truroe Abby too, Father. Bought Mom a rosary of Connemara marble there. We buried it with her,” I say, as a way of putting him off, but he begins singing himself, something about the pheasant making homes for their young on the cliffs of Dineen.

His is not a good voice, and certainly not the melodious sort you would imagine singing Gregorian chant, but very much him – large, ungainly, verging on the ugly, but redeemed the way his face is, by the lovely blue eyes and superb skin he still has, even though he’s certainly past eighty.

Now, I don’t know what possesses me to sing this one. I know plenty of others—drinking songs, protest songs, folk songs, but I give him a love story.

I hope he can forgive me, but it is the only song that comes to mind. And at first it seems peculiar, sitting here in the religious goods store of the monastery singing a love song as if it were a pub in a little town in Tipperary. And as I sing, I watch his clear blue eyes become slowly clouded with some dark sadness. And then, I begin to sense my voice, high, light, and pretty—my voice reveals me quite as much as his does him—pervading the whole place. For a woman’s voice can do that: travel on the air like an aroma. Men’s voices, dense and heavy, fill up whole rooms, obliterate other sounds, but women’s traverse great barriers.

I stop at the end of the verse and he begs, “Oh no, do go on, please do,” and I see he knows this song, so I continue, telling the Romeo-and-Juliet story of Jeannie, who was forced by her parents to marry a man for his lands, and I feel my voice going all the places women never go in this monastery even now: the monks’ cells, the bakery, the apiary, flowing like an immense crock of spilled honey on a summer’s day.

As I sing, I watch his eyes fill slowly with tears, and I wonder, as the water collects heavy in the corners for much of the verse, and finally overflows and inches its way down the smooth white cheek, what made him leave Ireland well over half a century ago.

As the last high, light notes die, Father Francis leans forward and whispers to me, as if it is a secret and no one else should hear, “There is nothing lovelier than the sound of a woman’s voice. Your father would be so proud.”

I had not come to sing and chat, but to attack and flee, and a glance at my watch tells me I am already late for an appointment in the next town.

“Please come again and sing, Child,” he says, “Promise me ye will,” he entreats, taking my hand gently in his two huge, warm ones when I lean forward.

“Yes, Father Francis, I will,” I promise as I rise and kiss his smooth, white cheek and then head out of the monastery store. Evening vespers fill the vestibule as I pass the chapel and follow me out the door and down the old limestone steps. ~ By S. Keyron McDermott