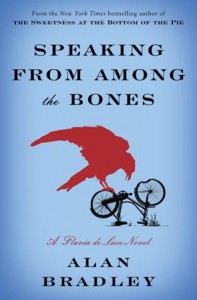 Canadian author Alan Bradley, creator of the best-selling Flavia de Luce series, is enjoying life on the Isle of Man. Here, he shares his thoughts on the island and his feelings about the popularity of Flavia, his eccentric 11-year-old sleuth, who will soon be brought to TV screens by director Sam Mendes.

It’s said that from the top of Snaefell, the highest mountain on the Isle of Man, one can see the seven kingdoms: Man; Ireland; Scotland; England; Wales; the Sea and Heaven. Many ride the Snaefell Mountain Railway to take in the view that Alan Bradley has often enjoyed during his six months on the island, where he lives with his wife Shirley.

“Historically, this island was beyond the bounds of the Roman Empire,” Bradley told Celtic Life Intl., “so that the antiquities are Druidic and Viking. The Celtic influence is strong, and there are still many Celtic crosses to be seen in the ancient churchyards. The music, too, betrays its origins, as does the lilting rhythm of Manx speech.”

Bradley said the Isle of Man is known for its artists, its kippers, its queenies (Queen Scallops), and the TT motorcycle races, “and to that I might add its beauty, which, to the eye, is a wonderful blend of the other six kingdoms,” he said.

“In many ways, certain aspects of the landscape, and in certain lights, remind me of my ancestral home territory east and somewhat north of Cobourg in Ontario, so it’s a very comforting place to live. There has always been a powerful literary tide here, and it’s wonderful to be invigorated by an atmosphere in which the Arts are so well respected and flourishing.”

Life is generally invigorating for Bradley, whose literary career is blossoming at a time of life when many are relaxing into retirement. Since 2007, when his initial Flavia story won the esteemed Debut Dagger Award, the author has written five Flavia de Luce mysteries and the sixth, The Dead in Their Vaulted Arches, will be published in early 2014.

The writer was 69 when he won the Debut Dagger. Until then, his short stories and various other kinds of writing had been well received, but Flavia’s global popularity has brought success on a different level.

“I now realize, much to my surprise, that I am what my mother would have called ‘a slow starter,’” Bradley said. “Although I began writing my first novel when I was a boy, I wish I’d started publishing sooner.”

Critics praise the Flavia books for their wit, clever plots and detailed representation of life in 1950s England, but the main appeal lies in the character of Flavia herself, whose individualistic voice dominates the novels. A gifted and eccentric girl with a passion for chemistry, Flavia lives in a decaying country house with her father and two older sisters.

“Flavia is just your ordinary precocious 11-year-old girl with a passion for poisons. Oh, yes, and she has violet eyes,” Bradley said. Her age is important. “An 11-year-old is on the cusp: neither girl nor woman; man nor boy. It is a magical age, when, given the gift of wonder, anything – anything! – is possible.”

Bradley’s adept handling of Flavia’s passion for science suggests the author may be a retired scientist, but in fact he worked as a television engineer in Canada before retiring in 1994 to focus on writing.

“Researching the chemistry for the Flavia books is hugely enjoyable, since I don’t know anything whatsoever about the subject,” he said. “Throughout history, that particular science seems to have been blessed with an unusual number of quirky adherents, and it’s always a treat to happen upon them unexpectedly in the dry, dusty pages of an antique textbook.

“As someone who has always admired eccentrics – I still remember the thrill of discovering John Stuart Mill when I was in high school, who said: ‘The amount of eccentricity in a society has generally been proportional to the amount of genius, mental vigour and moral courage which it contained. That so few now dare to be eccentric, marks the chief danger of the time.’ I couldn’t agree more.”

Bradley is thrilled that Sam Mendes, award-winning director of American Beauty and the Bond movie Skyfall, will be adapting his books for TV. “Sam Mendes has the perfect vision of Flavia and her world,” Bradley said. “I think it’s highly likely that the Flavia de Luce series will be seen internationally.”

Bradley intends to write at least four more Flavia books, but “Who knows?” he added, “An author might be swayed by having such devoted readers.”

Speaking from Among the Bones

In the fifth book in his Flavia de Luce series, Bradley offers readers another colourful adventure in the company of his brilliant creation, 11-year-old super sleuth Flavia de Luce. In this book, the ever-curious child comes face to face with a dead body and crawls through putrid graves. Bradley develops his character’s passion for chemistry, revealing that nose oil is useful for picking locks! And he explores Flavia’s maturing emotional and moral consciousness, concluding with a final sentence that leaves readers eagerly awaiting the next book.