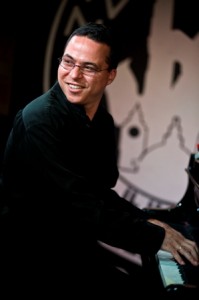 Pianist, composer, arranger, producer and educator Alex Wilson might be the busiest musician on the planet. Always with a plethitude of projects on the go – including piper Wilber Calver’s brilliant Celtic-infused recording Diaspora – the 42 year-old is the brainchild behind the London Latin Jazz Fest, which begins in the U.K captitol tomorrow.  Recently, Celtic Life International caught up with Wilson in between gigs.

What is your own background/ethnic heritage?
I am have British parents, born in England, with a Sierra Leonian grandfather – which makes me 1/4 African.

When and why did you start playing music?
My father is an amateur piano player and would always play in the house so I grew up around music.  In my early/mid-teens I started to take it really seriously, forming my first jazz band and writing my first compositions.   I’ve been hooked since then!

Are they the same reasons you still do it today?
I am still hooked but do find sustaining a career in music constantly challenging – it doesn’t get any easier!

How would you describe your sound today?
I would say the music I produce and perform always has a jazz-base and is almost always sourced from the African diaspora.

Where do you typically perform?
There’s no predictability about this at all!  My last gig was at the Hollywood Bowl to 16000 as guest with Rodrigo y Gabriela and my next one is at a small festival in Switzerland with Wilber Calver, the Afro-Cuban bagpiper.  In September of this year I will curate the London Latin Jazz Fest which takes place in a jazz club in Soho, London.  So it’s a rich variety!

What is the response like from audiences?
Always good – I am blessed!  I take a lot of time to prepare each concert – considering the context of the performance, the specific music project and how I can best contribute. Hopefully people pick up on this.

What inspired the latest recording?
My latest recording is Alex Wilson Trio – I felt it was time to bring everything home to the piano, after having done so many larger band projects.  The album, I hope, encapsulates my musical experience and knowledge in the stripped down lineup of piano, bas and drums.

What were the challenges?
Raising the funds, practising the material to be up to standard, touring on a shoe-string budget.

What were the rewards?
An album that will always be in my solo catalogue, which now comprises nine titles. The personal musical development gained along the way.

How have you grown as a player since Salsa Veritas?
Salsa Veritas was a few years back now – I have since released two albums on Alex Wilson Records: Diaspora by Wilber Calver and Alex Wilson Trio.  Both of these allowed me to grow as a pianist and stretched me musically.  In the case of Wilber’s album I had to learn Celtic melodies!  For my own trio album, it was stripped down to leading from the piano which is a contrast from all my other, bigger band projects. This was a really good experience and challenge for me.

What do you have on tap for the rest of 2013?
I am curator of the first London Latin Jazz Fest – www.londonlatinjazzfest.com – which is a new departure for me.  Between 19th and 22nd September 2013, there will be four concerts in a jazz club in Soho (Pizza Express Dean St) and I’ll introduce every night and play a short solo piano slot.  I also will do a two piano collaboration with UK jazz maestro Jason Rebello (who was Sting’s pianist for 6 years) and get chance to feature some of the best latin jazz talent in London.  If it goes well, we will do it again next year.

Is enough being done to preserve and promote Celtic culture generally?
My involvement with Wilber Calver has brought me into the Celtic world and I would love to find out more about it. I have done a project with Kathryn Tickell in 2010 – www.thecompass-suite.com – which I enjoyed immensley.  I love Kathyrn’s music. Wilber also introduced me to the Galician piper Xuacu Amieva and we played together earlier this year which was fantastic.

What can we be doing better?
Keep spreading the gospel – don’t stop!