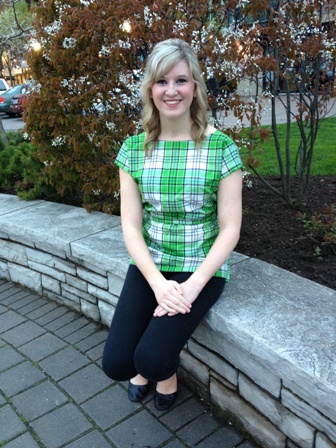 This Saturday night, Nova Scotia’s Amethyst Scottish Dancers will be kicking up a storm at the Celtic Christmas Show in Halifax. The troupe’s Artistic Director Marla MacInnis gives us the details.

What are your own ethnic roots?
I’m proud to say I’m a MacInnis. Although I don’t know of any direct relatives living in Scotland now, my surname carries strong ancestral ties to the country.

What originally inspired you to get involved with dance?
I grew up with the Barra MacNeils CDs playing around my house. This often inspired my sisters and me to “dance” and we forced our parents to sit and watch so many concerts in our living room that they finally must have figured it was about time we actually learned what we were doing. They enrolled us in highland dance and that was the beginning of that!

Are they the same reasons that you still do it today?
I dance now because I’ve never loved anything more than the culture and movements associated with it. Highland dance is more of a way of life than a choice and even though I’ve been doing it for so long, I’ve never felt like stopping was an option because my life has become so engrossed in it. I think that’s the case for many of us in the Celtic community. However, I still get inspired by great music and even have had the chance to choreograph and dance live with the Barra MacNeils. That was a special full-circle type moment for me.

How did you get involved with the Christmas Celtic Concert?
Zeph (Caissie, organizer) reached out to ask if Amethyst would like to be involved and I jumped at the opportunity. I’ve never worked with Zeph before but we were both involved in the Royal Nova Scotia International Tattoo last year and I had great respect for him and his group. I’m excited for the chance to work with him.

Why is it important for the community here?
Nova Scotia has strong Celtic roots and it’s important to celebrate them as much as possible. When we celebrate our culture, we are also teaching others about it and ultimately working to preserve it. The Celtic Christmas show is based primarily on traditions and there is no better time than Christmas to celebrate tradition.

Will you be involved with the event again in the years ahead?
If the opportunity is offered again, then yes, definitely.

How else are you involved with the Celtic community here?
I spend a lot of time teaching dance but I still enjoy competing and performing myself as well. However, one of my most rewarding experiences has been becoming Amethyst’s Artistic Director. I love working with other members of the Celtic community to promote our culture and this position has given me the means to do so. For example, I was really proud last year when Amethyst produced a show in collaboration with local musicians on Tartan Day marking the 60th anniversary of the Nova Scotia Tartan.

What’s on tap for you for the rest of 2013?
Amethyst will be hosting our own show on March 2, 2014 at Alderney Landing in Dartmouth, Nova Scotia. As soon as the Celtic Christmas show is over, I’ll be turning all of my focus to our show and finalizing those details. Other than that, I hope to find some time to eat Christmas trifle with my family and enjoy the holidays.