An Irishman in New York 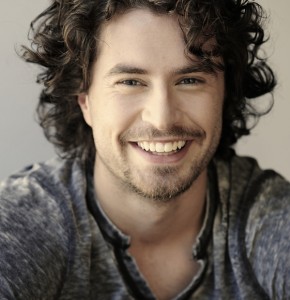 Kevin Ryan will be bringin’ a wee touch o’ the Green to a sea of Tartan Red at this year’s From Scotland With Love fashion extravaganza on Monday night in NYC.

“I’m freezing me arse off…”

Kevin Ryan isn’t used to the cold Canadian winters. The award-winning Irish actor and filmmaker – who lives in Los Angeles for most of the year – is on location in downtown Toronto in mid-February, finishing production on BBC America’s historical drama Copper.

“I’m all bundled up here,” laughs the handsome twenty-something, “but I’m starting to lose all feeling in my toes. I don’t know how you Canucks take it – you’re a bloody rugged lot.”

Despite the bitter cold, Ryan has reason to feel warm these days; Copper is expected to make him hot-property in Hollywood, and his role as Detective Francis Maguire is one that he wears well.

“It’s set in New York City in the 1860’s,” he explains, “at a time when the first wave of Irish immigrants arrived in the new world following the (potato) famine. We shot some of the series there, and walking through the neighbourhoods, seeing the old tenement buildings and hearing the stories of struggle and hardship was an incredible history lesson for me.”

The story of the Irish in America might ring familiar for Ryan.

Born in Dublin, the young thespian apprenticed as a stone cutter – a family trade for eight generations – before following his vocation into the arts.

“Theatre, dancing and music were my true callings,” he recalls, “and sports also. I was actually a dirt-bike champion back home for a bit.”

With his family’s support, Ryan crossed the waters in the mid-2000s to pursue his passion for performing. His solid Irish work ethic paid-off, and it wasn’t long before he landed leading roles in several critically-acclaimed independent films.

Agents took notice, and soon cast him in a number of higher-profile productions, including Entourage and Days of Our Lives.

“The work has been good and steady,” he says. “And it has opened the door to other opportunities.”

Indeed, his resume has grown significantly in a short time. Along with starring in RTE’s popular series Raw, Ryan has produced two films of his own; Laredo, and The Tub, both of which won numerous film-festival awards in 2009.

Things won’t be slowing down anytime soon either; his work on Copper – which is directed by Oscar-winner Barry Levinson (Rain Man, Wag the Dog) – highlights a busy year that will see several of his films in production or released, including Songs for Amy, Tripping Tommy and Paddy in the Boot.

“Things are coming together very quickly for me, and I am very grateful,” he humbly confides. “Sometimes I have to pinch myself to be sure I’m not dreaming. It has all been a little overwhelming.”

True to his Celtic roots, Ryan looks to home for support.

“Despite the distance, I am very close with my family,” he shares. “I call them almost every day and I get back there quite a bit. They keep me grounded. Every time I start sounding too big for my britches they remind me who I am and where I am from.

“And when I told them how cold it has been here in Toronto, they said I should just stop complaining and count my blessings.”