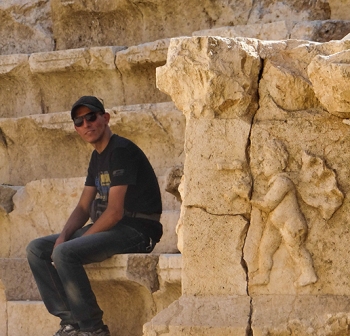 35 year-old Hussam Labbad has been fascinated with Celtic culture for over a decade. And he’s not alone; his Ancient Celts Facebook page now has over 126,000 followers. Recently we spoke with him about his efforts to carry the Celtic message.

What is your own heritage?
I am Middle-Eastern with Phoenician ancestry.

When did the Ancient Celts Facebook page go up?
It was created in December of 2012.

Why, in your opinion, is it so popular?
It is popular because of both the quality and quantity of posts that we put up each day.

What other Facebook pages do you run?
In all, I have several other historical/cultural pages relating to different civilizations, including Vikings, ancient Rome, ancient Greece, Sparta, Troy, ancient Egypt, Celtic Beauty, ancient Persia, ancient Phoenicia, Medieval Gothic Fairy Fantasy Magic, Native Art Sculpture and Ancient Illyria. I also have my own photography page. Thankfully, I have a number of assistant administrators helping me with them daily.

Are they as popular?
Yes, most of them have tens of thousands of fans.

How has social media changed the way we interact?
There is no getting around the fact that social media has changed the way that we interact. Depending on whom you ask, this is either a great thing or an absolute disaster. In reality the truth falls somewhere in the middle. There are certainly benefits to social media, but there are also some legitimate concerns about the way it has altered our interactions. These changes are likely to become even more pronounced in the future. The biggest difference is the sheer number of people that we can interact with. In the past you were limited largely to people that you knew in person, today you can connect with people from all around the world. This is why you see people with thousands of Facebook friends, for example; they would never have that many friends if they had to interact with them in person, though it does give them the opportunity to share opinions with a far wider range of people.

Will you continue to run these pages?
Yes, so long as I am still breathing and my heart is beating; those Facebook pages are my life, soul, and existence.

When did you become interested in photography?
I became interested in photography at the age of twenty, but only became really active with it in recent years. All my life I have loved two things more than anything else; history and photography. As such, most of my photography is of ancient ruins and remnants. It is my goal to visit Scotland, Wales, Cornwall, the Isle of Man, Britain, Ireland, France, Northern Portugal, Spain, Belgium and Poland and explore the Celtic parts of those nations with my camera.

What’s next on your agenda?
My hope is to create more historical and cultural sites on Facebook, but I will need even more administrators to help me run them!