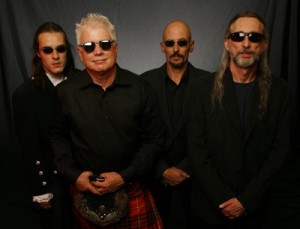 Seven years after a medical emergency pushed musician Paul McDaniel to explore his Celtic roots, his Highland Rock band Angus Mohr has released album number five, The Monster in the Box. Celtic Life International caught up with McDaniel as the Colorado-based band took a break between performances.

Angus Mohr has been popular ever since forming in 2005, although even fans find its blended sound hard to define. McDaniel, who is lead vocalist and bass player, describes it as “Rock and Roll with Bagpipes”.

The group draws from rock and roll’s many sub genres. “The most prevalent sound would be hard rock, but there are definite elements of punk, with a nod to metal and a hint of thrash,” McDaniel said. “We can’t forget about country either, as country has plenty of Celtic influence in it…The common thread is social commentary and the need to get a message across at a basic human level.  The exception to that is music that is just too much fun to not play.”

The recording process for the new album was especially thorough, McDaniel said, and was based on experience of playing the tunes live and then deepening them in the studio.

“I always like to get as much live experience with material as possible,” he said. “As always though, there are a number of places where we were able to do more with the recording process to add depth and instrumentation.”

Although the band formed seven years ago, three of its members have been performing together since 1980, and the fourth – McDaniel’s son Matthew – since 1999.  Angus Mohr arose from a six-piece band called Ricky Fire and the Red Hot Voodoo Devils, which played regular rock and blues.

“My son Matthew had been playing pipes for a while and we wanted to incorporate them into the Ricky Fire effort, but had not pressed the issue,” McDaniel explained.

“Two years later, I had a medical event, which my doctor said I should not have survived.  At that point in my life, I decided I wanted to honor my Celtic roots and insisted we were going to add bagpipes…One of the members refused and drama ensued. Another member decided to leave for family reasons and, in two weeks, we went from six pieces to four.”

It was a tumultuous start, but the band soon had a new sound and moniker, taking the name of a 10th century pragmatist who stopped the Vikings attacking his region by marrying the daughter of a Viking king, thus creating a family alliance.

Audiences took a while to adjust when the Ricky Fire musicians adopted the new sound but, “The non-Celtic, Ricky Fire type venues were surprised but pleased with the ringing of the cash register,” McDaniel said of those early days when Angus Mohr was emerging from the shadow of the previous band.

The child of music teachers and farmers with Scottish and Irish roots, McDaniel grew up inOklahoma. He said the band intends to keep to their current creative path, although they are currently dabbling in material with a country influence. “I have heard many times about Celtic influence on the evolution of country music,” McDaniel said, adding that he would also like to explore ambient music, which focuses more on sound than melody.

Performing remains a thrill. “Audience response is what caused us to become Angus Mohr.  It is what keeps us going.  It is why we do what we do.”

Colorado-based Angus Mohr brings it all to the table with their latest release, Monster in a Box. Power chords and pounding drums drive Andy Renwick’s Favourite Ferret and Scotland the Brave, while the drone of didgeridoo stirs below the softer surface of Barbary Coast. The band lets loose à la Green Day on When Johnny Comes Marching Home and The Clumsy Lover. Step It Out Mary is more traditional, while cover versions of Nine Inch Nails’ Hurt and Robert Plant’s Darkness, Darkness and stirring and soulful. Fiddle, whistle, acoustic guitars, piano and percussion are well-blended, and Matthew McDaniel’s passionate and powerful piping hovers over all with memorable melodies. Good tunes and great fun from this popular quartet.