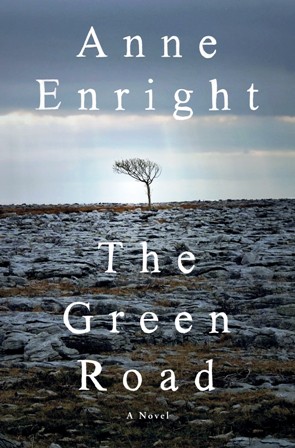 “It always takes me a few days to get used to the time change,” sighs the Irish scribe over the phone from Toronto where she is on tour promoting her tenth book, The Green Road. “Thankfully, the flight back is never as bad – it’s shorter, and by then I am anxious to go home anyway.

“Don’t get me wrong,” she continues, “I love to travel, but coming to Canada and America does take a bit of a toll on me – along with the travel itself, there is all the packing and preparation.”

Now 52, it is understandable that the author doesn’t like being away from her quiet and quaint community of Sandycove, outside of Dublin.

“My husband, my children, my house, my writing, my routine,” she muses, “that’s home.”

For a long time, home was anywhere Enright laid her head. Born in Dublin, she schooled in Victoria, Canada, and later roomed at Trinity College. After receiving a typewriter from her family on her 21st birthday, and studying creative writing at the University of East Anglia in the U.K., she released her first collection of short stories, The Portable Virgin, in 1991.

To her surprise, the anthology was awarded the Rooney Prize for Irish Literature that same year.

Though it would be another decade before she picked up a second trophy – the 2001 Encore Award for her sophomore novel, What Are You Like? – the floodgate of accolades had opened; in 2004, she won the Davy Byrne’s Irish Writing Award, and then, in 2007, she was awarded the world’s biggest literary honour – the Man Booker Prize – for her fourth full-length narrative The Gathering.

“That was the game-changer,” she acknowledges. “Before the Booker, I was quite content, like most writers, to ply my trade in relative obscurity, holed-up at home and all tangled-up in paragraphs. Suddenly the book was selling like mad, and I was traveling like mad, making all sorts of appearances, doing media interviews…it was quite a whirlwind.”

Her newfound fame had an impact on her creative life as well.

“I would like to think that awards don’t affect the way I write,” confides Enright, who also earned the Orange Prize for Fiction in 2012 for The Forgotten Waltz. “But the truth is they probably do, both in good ways and in other ways. Good in the sense that the challenge me to grow as a writer, to hone my craft, to tell a better story. Not so good in the sense that, perhaps subconsciously, I might care what critics think of my work. Actually, any writer who doesn’t admit to that isn’t being honest with themselves.”

More important, she notes, is the opinion of her readers.

“There is nothing so rewarding as meeting someone at a reading or at a book signing and having them tell me how much they enjoyed one of my stories. Knowing that I have touched them in some way, or that I have made even a little difference in their lives, is part of why I keep doing what I do.”

With The Green Road, Enright indeed does what she does best; weaving threads of love, loss, memory, betrayal and redemption into a home-spun quilt of warm and witty fiction.

“The idea of home is central to this story,” explains the author, “home as a physical space, and as a place of emotion and connection. These characters, this family, though they are scattered like seeds in the wind across Ireland and the world, return to the roost – their roots – and that’s when things get complicated.”

Fittingly, the story is set along the most westerly post of the island, and of Europe.

“It is very much a place of departure – a place of great pain and great hope. How many of us left for greener pastures, and how many of us never returned home? Sadly, it is an all-too-familiar tale for the Irish – even today, with so many of us going abroad for work after the collapse of the Celtic Tiger.

“I suppose that I am blessed in that regard,” she sighs. “I get to go home again and again.”