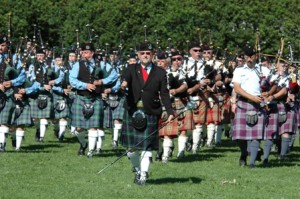 This week, The Antigonish Highland Games in Nova Scotia celebrates its 150th anniversary. In the first of a two-part feature story, Melanie Furlong takes a look at the event that has become synonymous with summer on Canada’s east coast.

Appropriately enough, the 2013 Antigonish Highland Games is shaping up to be the best-attended in living memory. Thousands of spectators are expected to flock to the small host town in northeastern Nova Scotia for the week beginning July 7. Many spectators will come from around the world, thanks to the event’s international reputation for authenticity, attention to detail, and hospitality.

The Antigonish Games are the oldest highland games to be held outside of Scotland and began in 1863, four years before Canada was established as a country. Nova Scotia, which means New Scotland in Latin, has a strong Celtic heritage and, over the years, the Antigonish event has raised funds for charitable causes such as the Antigonish Highland Society, a cultural organization dedicated to relieving “distress in indigent Highlanders,” and St. Ninian’s Cathedral, which was being built when the games started and still stands in Antigonish.

Long one of the province’s premiere events and a magnet to fine musicians like fiddlers Natalie MacMaster and Ashley MacIsaac, organizers were thrilled when this year’s games was named to the American Bus Association’s annual list of the Top 100 events on the continent. “To be selected from hundreds of other events in North America and to be included on ABA’s list is a huge honour,” event chair Alisha Grant told Celtic Life Intl.

Diversity is part of the event’s appeal and many of the historic contests such as foot races, piping, the Highland Fling competition and the dramatic traditional Scottish heavy events will be part of this year’s celebration along with the re-introduced track events, last held in the 1970s. The track events will occur on a brand new track at the town’s respected St. Francis Xavier University. Grant said those in the track and field communities are very excited and believe the re-introduced events will bring a fresh dynamic to the celebrations.

Pipe and drum bands from across the region and the country will compete July 13 and 14 on the town’s Columbus Field. These big competitions are seen every year in Antigonish as the town traditionally hosts both the Nova Scotia and the Atlantic Canadian pipe band championships.

“This is a big deal,” Grant said. “We’re anticipating a lot of dancers to continue to travel east after the Canadian championships in Montreal the week before. We really hope there will be a good showing of dancers and there will be some great judges coming too that we’re very excited about.”

The International Highland Games Federation World Team Championships will also be held July 13 and 14 and will see the world’s best highland heavy events athletes competing in the Hammer Throw, Shot Put, Discus and other much-loved contests.

“The best heavy event athletes from around the world from each country are paired in teams of two,” said Grant. “We’ll have about 12 competitors representing a number of countries, such as the U.S., Germany, the U.K., and possibly New Zealand. The World Caber Toss Championships will be tied into that event.”

Two of the most popular spectacles that will occur on the weekend are the Farmer’s Walk and the Tug-of-War. Sunday afternoon’s Farmer’s Walk, entered by many of the same heavy event athletes, will be the Canadian Championship event.

“The athletes walk a 100-foot course as fast as they can, carrying 202-pounds in each hand,” said Grant. “It’s incredible. You’ll see these men almost trying to run with this weight. It’s pretty intense.”

Outside the Games weekend, the Antigonish Highland Society has a few other events scheduled, such as the 80-kilometre Cape George Bike Race, a Kilted Golf Tournament, a lobster supper, ceilidhs throughout the week at various locations, a five-mile road race, an original stage production called The Ships of 1801, and the Concert Under the Stars, featuring headlining Celtic musicians Mary Jane Lamond and Wendy MacIsaac.

An inaugural event this year will be the Antigonish Highland Games Hall of Fame Induction Ceremony to be held Thursday, July 11. Fifteen inductees, including two groups, will be recognized for having participated in the Games over the years. “These include dancers, pipers, athletes and builders, people that helped with the planning and growing of the Games,” Grant said.