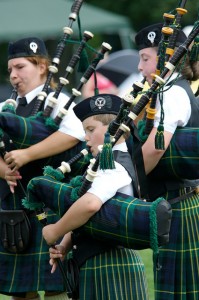 This week, The Antigonish Highland Games in Nova Scotia celebrates its 150th anniversary. In this second installment of a two-part feature story, Melanie Furlong takes a look at the event that has become synonymous with summer on Canada’s east coast.

In 2012, Vancouver-based bagpiper Mike Chisholm, who’s originally from Antigonish and has attended more than 20 Highland Games there, began thinking about travelling across the country from his new home in British Columbia to attend his hometown’s historic event. “There’s lots of great Celtic music, piping, fiddling, piano, and it really makes the Antigonish Highland Games stand out more than the others that I’ve attended out here,” said Chisholm.

He thought about getting all the pipers and drummers he’d known over the years together for a reunion at the 150th Games. While visiting Antigonish in the summer of 2012, Chisholm got together with Grant and Iain Boyd, the president of the Antigonish Highland Society. They thought a piper and drummer reunion for the Saturday morning parade was a great idea.

“My real aim is to bring here people who played the pipes or drums many years ago and haven’t played them lately,” Chisholm explained. “There’s an expression, ‘shouldering the pipes.’ I want them to think about shouldering their pipes again and playing very basic tunes – nothing too difficult – to play with friends and colleagues and people that they played with many years ago to celebrate the 150 years.”

So far, Chisholm and 20 other musicians have signed up to meet in Antigonish. Chisholm hopes to see 75 to 100 musicians in the reunion parade.

“I’ve put up a Facebook page as a place for people to meet online and discuss what’s going on,” he said. “It’s been a great way to get pipers and drummers together from all over the place to talk about the Games, reminisce about what it was like and hopefully make plans to meet up. Our contribution to the event will be forming a mass band, marching down the street and playing some basic bagpipe tunes. That’s our way of giving back and commemorating the 150thwith a little bit of the music we’ve enjoyed so much over the years.”

So, how does a 150-year-old cultural festival in an area that presumably no longer has “distressed indigent Highlanders” plan to retain its relevance in the future? By appealing to future generations, of course.

Friday, July 12 will be Children’s Day, or Tir Nan Og (Land of Eternal Youth) at Columbus Field. Track and field events, mini-caber toss, Gaelic speaking, Highland drumming, and butter churning are a few of the things children ages five to 12 can experience for a nominal fee. It’s all part of a plan to raise the profile of the Antigonish Highland Society and promote Scottish heritage, language and culture to young people.

“The Canadian heavy events’ junior competitors will be there to help out,” said Grant, “and we hope to see a couple of hundred participants. We had a contest among Gaelic classes in high schools to design a logo for the event, too. We got a product we were happy with and we engaged hundreds of students. Any way we can get in front of youth in a meaningful way is so important.”

Mike Chisholm feels the same. He says most bagpipers learned the pipes because they wanted to play solo or be in a pipe band parade. “The more we do that, the more people will be interested in playing the instruments and participating in the games and perpetuating that culture that’s so important to that area and is so unique.

“It’s really important to do what we can to encourage younger people to become involved, whether it’s through piping, music or dancing, those are important things and we can only do it by performing. I’ve said this to a lot of people. It’s wonderful here in British Columbia that there are so many different cultures to celebrate, but it’s also great to be able to celebrate your own culture, and Nova Scotia is really lucky to have the Antigonish Highland Games.”